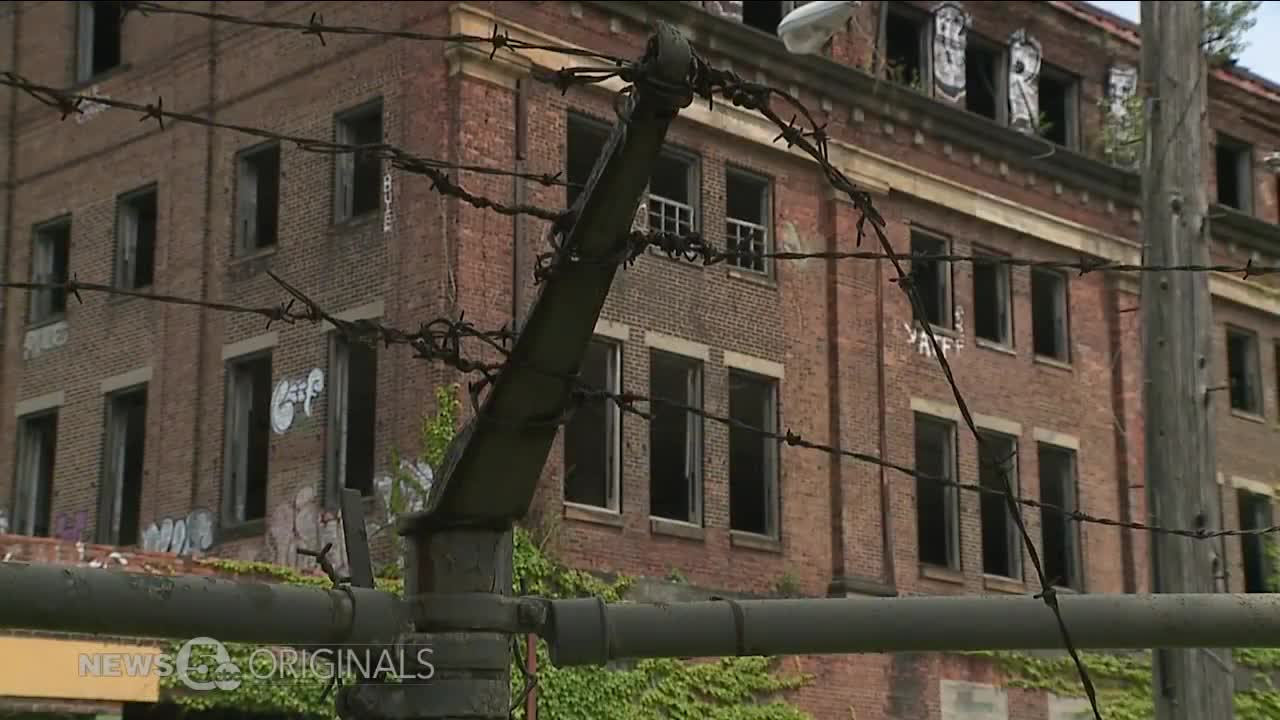 Whether it be air, water or land, the Cuyahoga River fire of 1969 and the federal policy that followed has affected every facet of our daily lives, including how the City of Cleveland approaches the environmental remediation and demolition of vacant industrial and commercial properties. 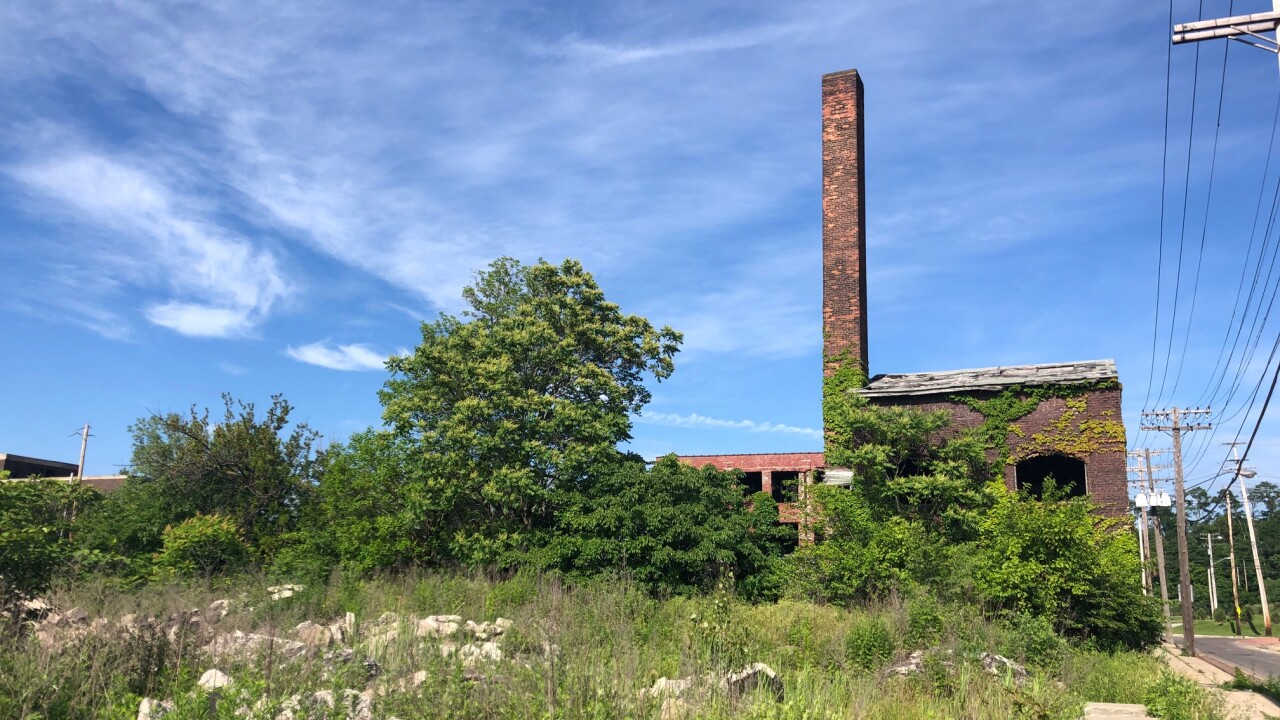 CLEVELAND — Whether it be air, water or land, the Cuyahoga River fire of 1969 and the federal policy that followed has affected every facet of our daily lives, including how the City of Cleveland approaches the environmental remediation and demolition of vacant industrial and commercial properties.

They can be found on a street corner or nestled in the middle of a neighborhood. Their hallmarks are graffiti and broken glass. The fences are falling. The paint is peeling. The hallways, once bustling with people and product, ring hollow. They are monuments to what mankind can make and what happens when we leave. The empty and blighted industrial buildings are the city’s ghosts. Over time, through an exhaustive and lengthy legal process, the heavy equipment is deployed and the ghost is exorcised.

Of the 4100 vacant and abandoned structures in Cleveland, the city estimates 150 of them are commercial or industrial buildings, according to Ayonna Blue Donald, the director of the Department of Building and Housing. Ranging from sprawling complexes steeped in a history of heavy industrial use to a dilapidated neighborhood strip mall, each one of these blighted properties can present a unique set of potential hazards, both obvious and hidden.

“Every building, every structure has a life. It has its own story,” Donald said. “A residential structure may have been home to a family raised there for the past 40 years. An industrial building may have been some type of processing plant for the past 100 years. You just don’t know. Sometimes a building may come out clean. Sometimes we may have to spend a half million dollars just on the environmental remediation of a building.”


For many of those buildings, the extent of which a property may be environmentally contaminated isn’t fully known until the earliest phases of the demolition process. The city’s well-established protocol for investigating and ultimately demolishing an abandoned industrial or commercial property stems from policies that were created following the thirteenth and final time the Cuyahoga River caught fire on June 22, 1969.

“A lot of the progress that we see in Cleveland would not be possible if we still had the water we had in 1969,” said Matt Gray, the chief of sustainability for the City of Cleveland. “We were able to take advantage of it. In that sense, that was a good thing. We said, ‘let’s use this fire to say never again.’ That’s what’s happened.”

As a result of the 1969 Cuyahoga River fire and subsequent lobbying by local, state and federal officials, President Richard Nixon proposed – and Congress later ratified – the Environmental Protection Agency. The creation of the EPA eventually led to the Clean Water Act and other legislation centered around protecting the environment. The way cities and communities approach vacant, industrial buildings also changed.

“That’s where I think the movement has shifted over time. We have to make every single neighborhood right -- and environmentally friendly -- for the entire neighborhood and the entire ecosystem,” Gray said. “When we think about buildings like this and all the investment that our building and housing department puts into that, to raze these and make them environmentally friendly is critical for development but also for the environment.”

imilar to the requirements in place for purchasing commercial and industrial property, when the Department of Building and Housing begins the legal process for ultimately demolishing a commercial or industrial property, an asbestos survey must be performed. For the larger buildings, an environmental assessment must also be performed. Delineated into Phase I and Phase II, the environmental assessments aim to identify potential volatile, toxic or hazardous materials and chemicals on and around a certain property. The assessments can also explore the potential impact on surface and ground water.

The process is now protocol. When the city began exploring the demolition of an overgrown and dilapidated industrial building in the 2600 block of Woodhill Road near the Quincy traffic circle, officials were relieved to learn the structure had nothing more significant than asbestos. The property, which is just blocks away from the ongoing demolition of the Victoreen Building, should be torn down by the end of the year, Donald said.

“This building specifically has been identified because it is in the footprint of the Safe Routes to School Program because it is within 1000 feet (of a school),” Donald said. “Additionally, it’s adjacent to Opportunity Corridor.”

The demolition of the Woodhill property highlights how the city approaches what properties to demolish and when. Donald said the department decides to demolish properties based on numerous statistics and other measurements, including the number of other demolitions occurring in the area; if it will open up a swath of land for future development; crime statistics; code enforcement statistics and the potential for future economic development in the area.

However, before Building and Housing can even solicit bids for demolition, officials must closely follow a strict, legal process. Donald said properties are identified through surveys done by city inspectors and community partners. Once a property has been identified, the city will have to get consent to search the building or secure a search warrant from Housing Court. From there, the city will issue a condemnation violation and the property owner has 30 days to comply.


That’s where the process can get bogged down through a tangled web of limited liability companies, deceased owners, defunct companies and absentee landlords.

“It is absolutely like playing detective because it is hard to find people. Sometimes people don’t want to be found. People may be all across the world,” Donald said. “We have property owners in Cleveland that may be down the street a couple of blocks or they may be in Australia or China.”

All of those parties must be given notice to the city’s pending demolition action because the owner always has the right to appeal or secure permits to fix up the property. Afterward, the process and associated paperwork will undergo legal review. Following that review, funding is eventually secured.

Commercial and industrial buildings can begin going down the path of abandonment for a myriad of reasons. Sometimes, the businesses that own the properties succumb to the Darwinian forces of a changing economy. Other properties enter a perilous limbo of tax foreclosure, forfeiture and speculative land buyers. As was the case in the Woodhill property, the owner, Harper Industries Inc., just stopped paying taxes and walked away from the property, leaving the city and its taxpayers to clean up the mess.


Sometimes the properties are used for un-permitted and illegal activities. One of those cases centers around a sprawling warehouse and industrial building located on Neville and Wentworth Avenues near West 73rd Street. In February 2018, the property caught fire, presumably from illegal scrapping activities, and set ablaze to an untold number of fluorescent light bulbs, each of which containing a small amount of mercury. In total, state officials said the property was home to millions of these fluorescent bulbs, putting the company, Fluorescent Recycling Inc., in violation of its permit and state law.

The fire prompted concerns that the mercury had become airborne or was washed away when firefighters extinguished the blaze. In the weeks that followed, the U.S. EPA spent an estimated $2 million to clean up the property. That money solely went to the cleanup of the light bulbs – not the property itself. While cases like this are somewhat rare, the high cost of environmental remediation is quite common.

Donald said these high costs force her office to be judicious in how it spends its limited resources.

Despite the oftentimes eye-popping price tag of remediating and demolishing a vacant commercial or industrial structure, Gray said it is a vital task for the environment’s overall health. While the primary goal is to retrofit the structures when feasible, removing them to make way for new development or greenspace is also a sustainable move.


“When we have heavy rains, which we have had a lot of recently, that run off from buildings like this into the drains and into our waterways, can have a profound effect,” Gray said. “There are all sorts of things that we can do with properties once they get demolished and made environmentally safe again. They can benefit the neighborhood not just in a sustainable way but in almost every way.”