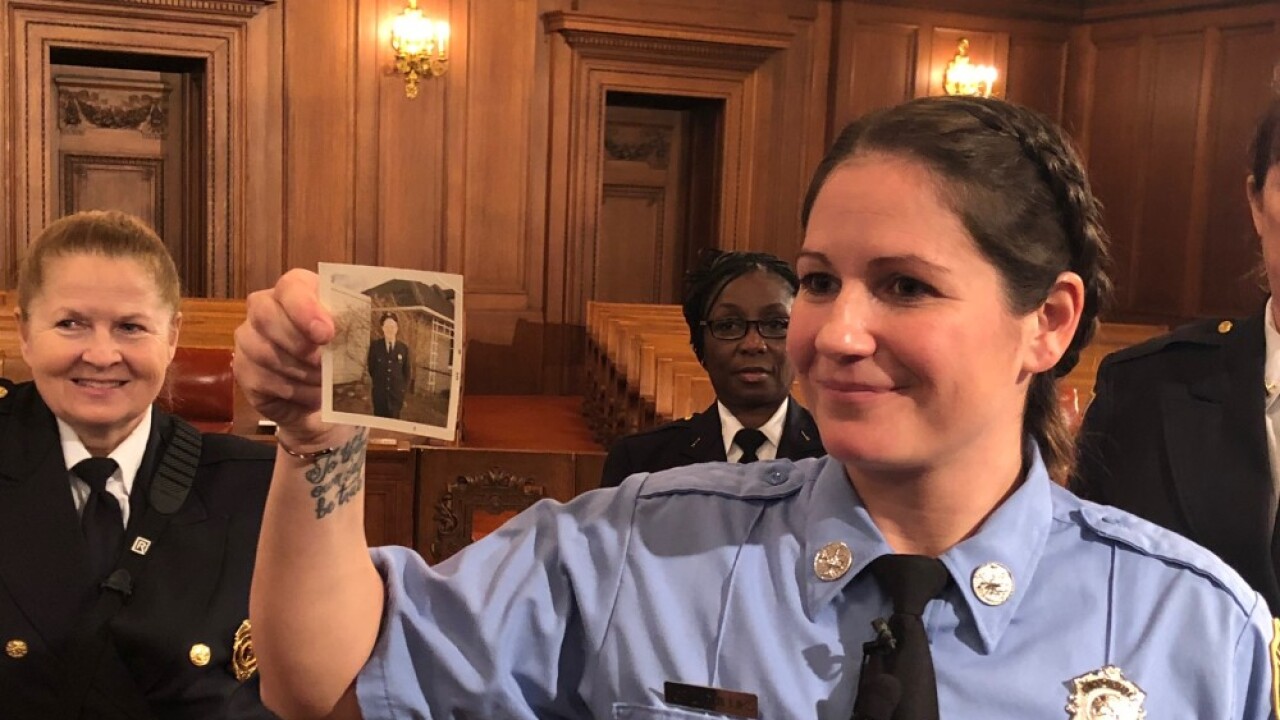 In a ceremony full of joy, tradition and pageantry, the Cleveland Division of Fire welcomed 19 new members into the public service family.

“Public service is an honorable profession. Everyone cannot do what you do,” said Mayor Frank Jackson.

The 34th Fire Training Academy Class took the oath of office in the City Council chambers in front of a large crowd of friends, family and fellow firefighters. Many of the newly-minted firefighters come from a long lineage of public safety personnel. That includes Phillips, who carried a photo of her grandfather in her back pocket.

“I picked up his picture this morning so I could bring him along for the trip and have him today to motivate me and relax me during the day,” Phillips said. “I have always had just a knack for helping others. This just seemed like an awesome way to do it. It really fit the kind of person I am.”

To serve is, in essence, to give of yourself. Phillips knows all about it. The former paramedic who once worked for a private ambulance service donated one of her kidneys to help an ailing family member.

“When I found out that [my uncle] needed something right now, I told my parents I was getting tested. Whether they agreed with it in the moment, it didn’t matter,” Phillips said. “My heart was set on it. I ended up being as perfect as a perfect match could be. I ended up donating my kidney to him.”

Upon taking the oath of office and receiving her badge, Phillips became the first new female firefighter for the city fire department since 1989. In recent years, the division has made a concerted effort to try to recruit more female members to joins its ranks. According to the US Department of Labor, only 4 percent of career firefighters are women. The National Fire Protection Association reports only 7 percent of firefighters, including those working at volunteer departments, are women.

“We’re still going to be pushing for active recruitment to get more females on this job. We have got to work on that and we know we have a job ahead of us, but we accept the challenge,” said Fire Chief Angelo Calvillo. “I can speak from experience that there have been tremendous (female) firefighters that I have worked with, side by side, going into structure fires and they held their own. They have my respect. [Phillips] did everything everybody asked her and she did it well. She’s a true leader. I am very proud of her.”

Phillips also quickly gained the respect of the members of the small but tight-knit sorority of female Cleveland firefighters.

“This happening today will show some young women that maybe it’s a possibility for her too,” said Battalion Chief Deberra Schroeder. “I’m so proud of her.”

From the beginning of her 18 weeks of physically and mentally grueling training, Phillips said her fellow cadets were accepting of her.

“I think there were a few eggshells walked on in the beginning but once most people get to know me, I can fit in quite well,” Phillips said. “I am here for the job. That is what I went into the academy for – to be a part of the team, to be a part of the department and to serve my community.”

One of Phillips' fellow cadets at the fire academy, Justin Leon, also comes from a family history deeply rooted in public service. His father, Wayne Leon, was shot and killed in the line of duty in 2000. To honor Wayne’s sacrifice, the fire department issued badge number 1338 to Leon, the same badge number as his father.

Leon’s mother, Grace, pinned her son in a private ceremony prior to Friday’s graduation.

RELATED: Cleveland firefighter given same badge number his dad wore when he was killed in the line of duty