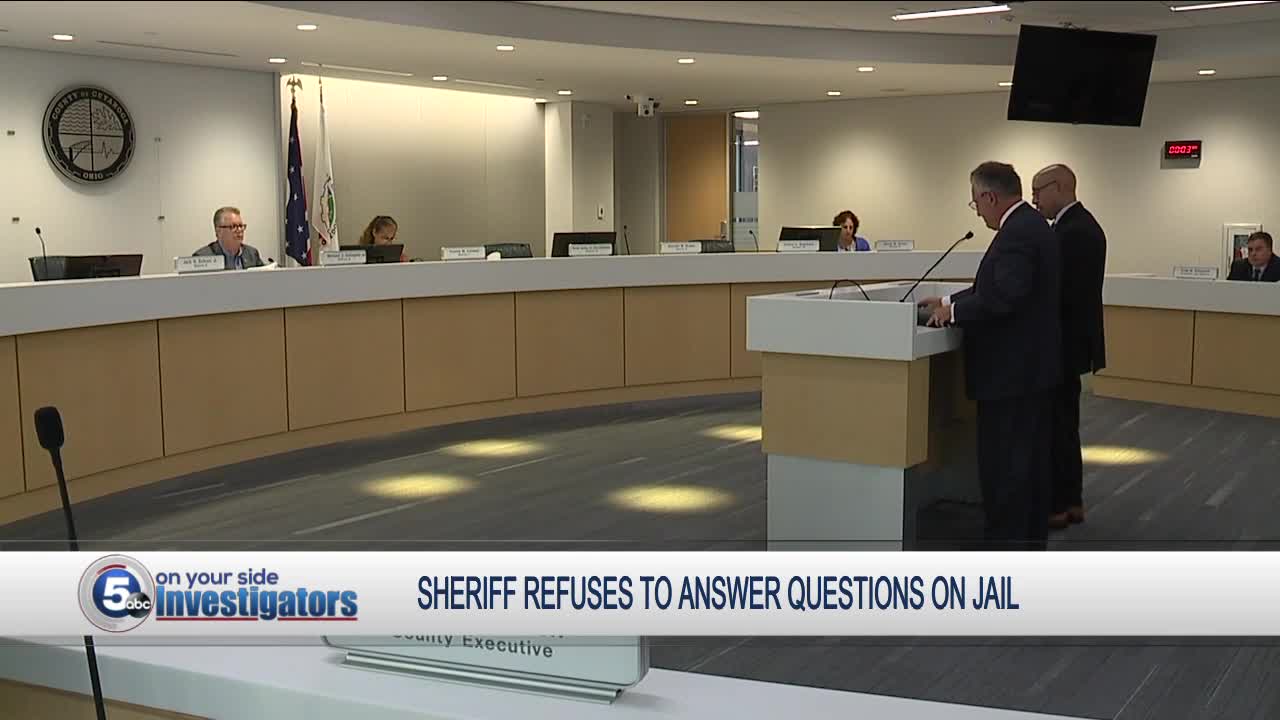 Council members accused soon-to-retire Cuyahoga County Sheriff Clifford Pinkney of stonewalling during a Public Safety Committee meeting during which the sheriff’s attorney refused to answer any of the 53 questions about the county jail system that the council submitted. 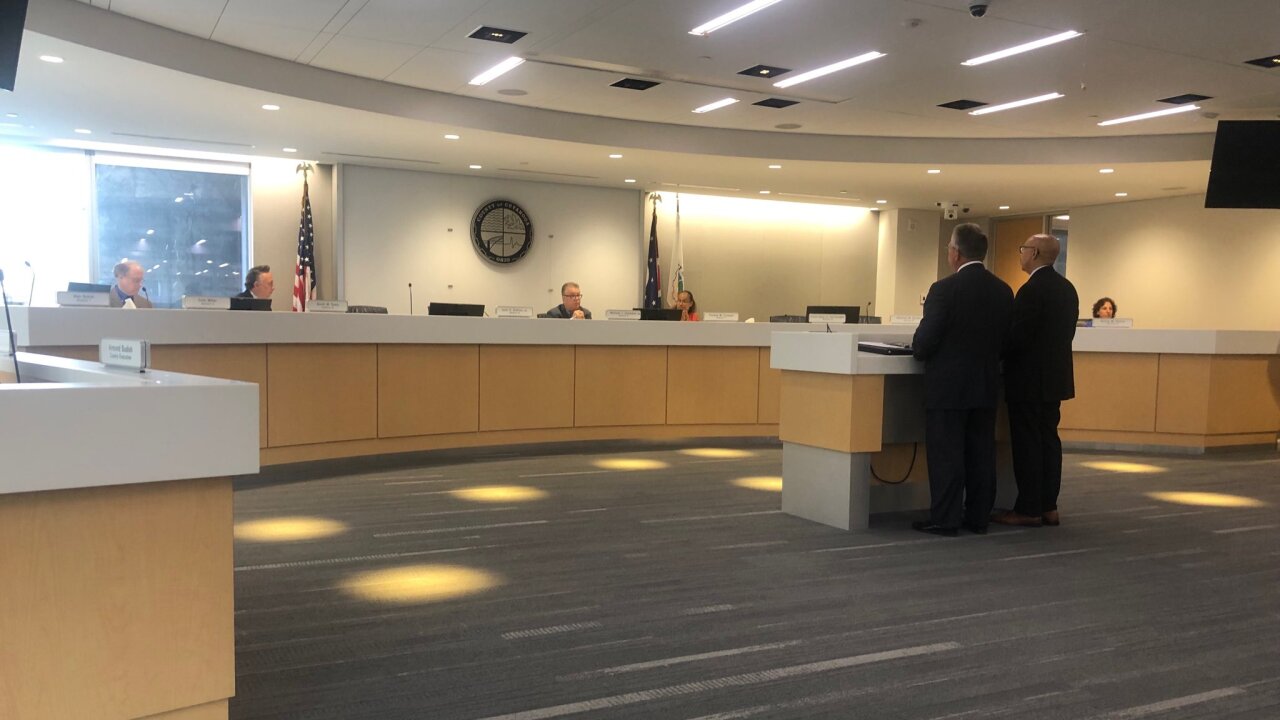 CLEVELAND — Council members accused soon-to-retire Cuyahoga County Sheriff Clifford Pinkney of stonewalling during a Public Safety Committee meeting on Tuesday during which the sheriff and his attorney refused to answer any of the 53 questions about the county jail system that the council submitted.

As Pinkney and his attorney stood before the Cuyahoga County Council on Tuesday afternoon, council members repeatedly asked about the deeply troubled county jail. Pinkney’s attorney refused to answer the first question, saying the answers could impact criminal and civil investigations and lawsuits, then repeated, “Same response,” as members continued to question the pair.

At one point, councilwoman Sunny Simon became visibly frustrated and accused Pinkney of “stonewalling” after he refused to answer questions about the problems at the county jail.

"I want further clarification why your client's not answering questions if he is not subject to any investigation or talking to the prosecutors or investigators," Simon told attorney Richard Blake.

"Well, I said he was not instructed by anybody (not to answer questions)," said Blake.

"Okay, so is he having conversations with federal or state investigators?" asked Simon.

"I'm not in a position to discuss that at all," said Blake.

Councilman Dale Miller told Pinkney: “The way you’re handling this, we’re not able to do the job we’re elected to do.”

Miller then called for a comprehensive review of a Cuyahoga County Jail program to house inmates for other communities.

“The first rule is when you’ve dug yourself into a deep hole is to stop digging,” Miller said.

The Cuyahoga County Jail has come under local, state and federal scrutiny after a litany of issues have been made public in recent months, from inmate suicides to inmate abuse to criminal activity by jail officers to various apparent attempts to smuggle contraband. See our complete coverage of the county jail issues here.

Below are the 53 potential questions submitted to the sheriff by members of the council's Public Safety and Justice Affairs Committee:

1. Obviously, we have had multiple issues that are in the public regarding the County Jail, from your perspective, what is the root of these problems?

2. There has been a significant number of suicides and suicide attempts in the Jail, what do you believe the County can do to address the problem?

3. Beyond those issues in the Corrections/Jail Division, are there any other concerns or issues that you have recognized that need to be addressed within the other divisions of the Sheriff’s Office?

5. Are current staffing decisions/policies different from when other Cuyahoga County Sheriffs were in charge?

6. What do you believe is the biggest factor into the County not being able to hire and retain additional correction officers? Are there any other important factors?

7. Beyond further increases in salary, how can we improve the County’s ability to hire and retain additional correction officers?

9. Did you have any involvement in the decision to promote Ken Mills to the Jail Administrator position? At that time, did you raise any concerns about Mr. Mills being promoted to that position? If you had final say in HR matters, would you have hired Ken Mills for that position with his background/resume?

11.Did you ever get the sense when Ken Mills was the Jail Administrator that you reported to him or he had the ability to make final decisions over you? If so, where did this impression come from? What was the actual day to day reporting structure within the Sheriff’s Office vs. what may have been on an organizational chart?

12.Are there any staffing changes, increases, decreases at any level within the Sheriffs office today that you would recommend? If so, what are they?

14.There have been some horrific videos released of correction officers beating and pepper spraying inmates that are restrained. What can be done to eliminate this type of abuse from tax payer funded employees and what have you done personally to try and ensure this doesn’t happen ever again?

15.Do you believe there is ever an appropriate time for a Jail Official or Law Enforcement Officer to shut off his or her body camera? If so, why? What is the process for complaints related to the types of behavior we’ve seen in these videos? Do you see any possibilities for failure of this process? If so, how could the complaint mechanism be changed to address those failure points?

16. What was your specific involvement in the process to establish a regional jail system in Cuyahoga County?

17.Do you agree that the County needs the Euclid and Bedford Heights Jail? If so, why? If not, why?

18.If you remember, back in May 2018, the Administration had to rush on an emergency mission critical contract for temporary nurses for the Bedford Heights Jail because they opened the facility without any nurses. How did you allow a jail facility to open without proper staffing? What happened?

19.When the Euclid Jail contract was presented to Council, it was stated that it was rated for 80 beds. We just recently learned that it’s only rated for 32 beds. Can you please tell us why you believe Council was told one capacity rating versus the accurate rating?

21.With the recent news of the County withdrawing from the Euclid Jail lease, what would you recommend the County do to assist the City of Euclid during the transition?

Structure of the Sheriff’s Office

22.Do you think the current organizational structure of the Jail is the most ideal? If not, what changes would you make to staffing to fix it? If you have changes, have you previously recommended them? If so, when? If you did recommend these changes, why weren’t they implemented?

23.As you may know, there are currently two charter amendments in front of Council relating to the Office of the Sherriff. One is to put greater guidelines around the appointment of the Sheriff and the other is to create an elected sheriff position. Considering you have been the Sheriff since 2015, which charter amendment do you prefer and why?

24.Did you believe there was ever a time since you became Sherriff that if you spoke up or against Ken Mills or anyone in the administration, that you could have ended up being fired, or being forced to resign?

25.Was there ever a time that you were discouraged or believed that if you spoke out against a decision, be it HR, budgetary, or anything else, that there would be consequences from the Administration? If so, what were they?

26.Was there ever a time that you felt you couldn’t come to a Council meeting because of consequences from the Administration?

27.Since you became the Sherriff, were you ever told not to inform Council about anything? If so what was it? If so, who told you that?

28. Since you became the Sherriff, was there ever a time when information you were going to share with Council was modified or edited by anyone else prior to being submitted to Council?

Overcrowding/Physical Structure of the Jail

29.What best practices would you like to see incorporated into rehabbing the existing jail or building a new one?

31.In years past the County would send inmates to other jails throughout Northeast Ohio. We would pay them $55 per inmate, per day. This helped with overcrowding issues tremendously, why did this practice stop? Do you think we should go back to this practice? Were you involved in this decision?

32.What happened to the central booking project from 2012/2013? Would reconstituting this project help solve some problems? Do you think we should do this?

34.How many inmates are in the County jail awaiting trial? Out of those number of inmates, what is their average number of days in the jail?

35.What do you think the County can do to help with the overcrowding issue?

36.Given that the County Jail has been consistently over capacity to varying levels for years, is there an inmate population level at which you would refuse to accept more prisoners?

37.How do you believe the current transition to MetroHealth for complete medical care has gone so far?

38.Are there any structural/IT modifications that still remain to be completed by the County related to the Metro transition?

39.Are you aware of any requests for staffing increases/additional appropriations in the medical unit that were requested by the Sheriff’s Office and not ultimately approved by the Administration since 2015?

41.Back in 2017, as part of the 2018-2019 biennial budget process, the County Administration presented a budget reduction in the Sheriffs Office. The budget reduction would have privatized medical care for the jail inmates and given a no bid contract to Naphcare. As you know, Council rejected this budget reduction, which allowed us to continue our relationship with MetroHealth. Did you have any involvement in this recommendation to contract with Naphcare? If not, where did the concept of Naphcare come from? If not, how is it possible that the person in charge of the Jail, the County Sheriff, wasn’t part of this decision?

42.Back in 2017, as part of the 2018-2019 biennial budget process, the County Administration presented a budget reduction in the Sheriff’s Office. The budget reduction would have privatized food services in the Jail. At that point in time, it appeared that the concept wasn’t well thought out. Did you have any involvement in this recommendation to privatize food services? If not, where did this concept come from? If not, how is it possible that the person in charge of the Jail, the County Sheriff, wasn’t part of this decision?

43.Do you track the jails use of red zoning? If so, when did you start tracking this data?

44.Since 2015, have you noticed an increase, decrease, or the same amount of red zoning? If it is different today than when you first took over as Sherriff, what caused the difference?

46.Between the U.S. Marshals Report and the recent State of Ohio Inspection reports, what do you believe are the three biggest issues/concerns and have those been addressed?

47.In the US Marshals report, it states that pregnant women are sleeping on the floor. Was this accurate? If it is, how did we let this happen?

48.In the US Marshals report, there was discussion of doors that don’t lock. Was this accurate? If it is, how did we let this happen?

49.In the US Marshals report, there was discussion of access to food being used as a punitive measure. Was this accurate? If it is, how did we let this happen?

50.In the US Marshals report, there was discussion about inmates being denied access to showers, proper hygiene products, etc. due to red zoning. Was this accurate? If it is, how did we let this happen?

51.In the US Marshals report, it states that juveniles are being co-located with adult inmates. Was this accurate? If it is, how did we let this happen?

52.What are your thoughts on the State of Ohio coming in every 30 days to inspect the Jail?

53.What are your thoughts on why the U.S. Marshals Report was so dramatically different from the preceding State of Ohio Inspection Reports? How could those inspections have missed what the Marshals found?