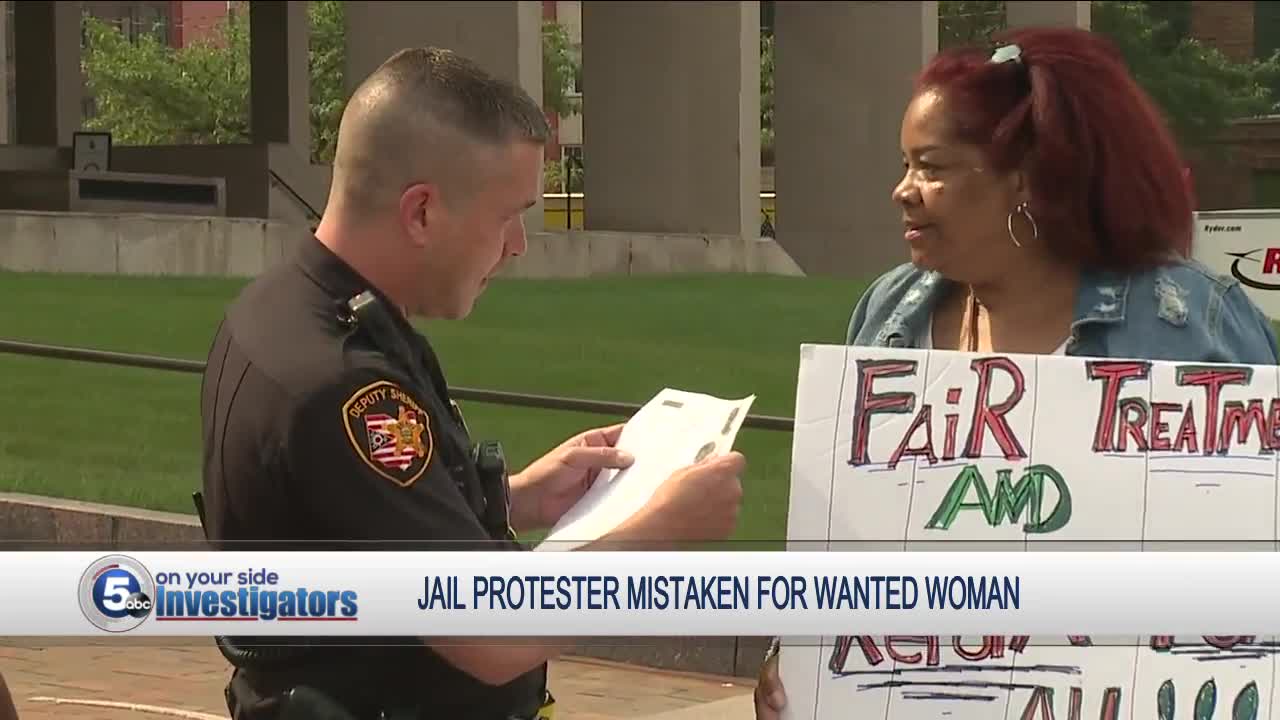 What started as a rally calling for a federal takeover of the troubled Cuyahoga County jail Friday, took a strange turn when a protester was stopped by deputies and asked for denitrification outside the Justice Center.

CLEVELAND — What started as a rally calling for a federal takeover of the troubled Cuyahoga County jail Friday took a strange turn when a protester was stopped by deputies and asked for identification outside the Justice Center.

"Well, they said that I looked like someone who was wanted," said Gwendolyn Jarrett.

News 5 cameras captured the moment Jarrett, who is black, was approached by two deputies. A male deputy could be seen holding up a picture of a woman and comparing it to Jarrett.

"I was able to see it wasn't me," said Jarrett. "Clearly. You're looking me right in my face and I said that wasn't me. He said, 'They said inside it looks like you to them.'"

The deputy then asked Jarrett, who was among roughly 25 protesters gathered, to see her identification. Other protesters couldn't believe it.

"This is ridiculous," said another as the deputies stood near Jarrett.

After she showed the officer her bank card, the two deputies went back inside the building. A Cuyahoga County spokeswoman said the deputies were following up on information that Jarrett resembled a woman wanted for assaulting an officer.

Jarrett believes it was something else.

"It's clear to me, it's definitely harassment, you know?" said Jarrett. And I've got something to say. I've got facts to state."

The county spokesperson admits it was a case of mistaken identity and said the county accommodates peaceful rallies like Friday's, adding, "Protest and dissension are parts of the foundation of our democracy."

Jarrett believes it was an attempt to silence her voice.

"Something told me before I left the house, Gwen, get your ID, you know what this is all about," she announced to the crowd.

"Shame on you Cuyahoga," replied a protester.

"Shame on you," echoed Jarrett. She says she's even more determined to fix what the she and her fellow protesters believe is a broken justice system.

"If you don't stand for something, you will fall for anything," said Jarrett. "And this insanity with the institutions and system has to stop. It's too much."