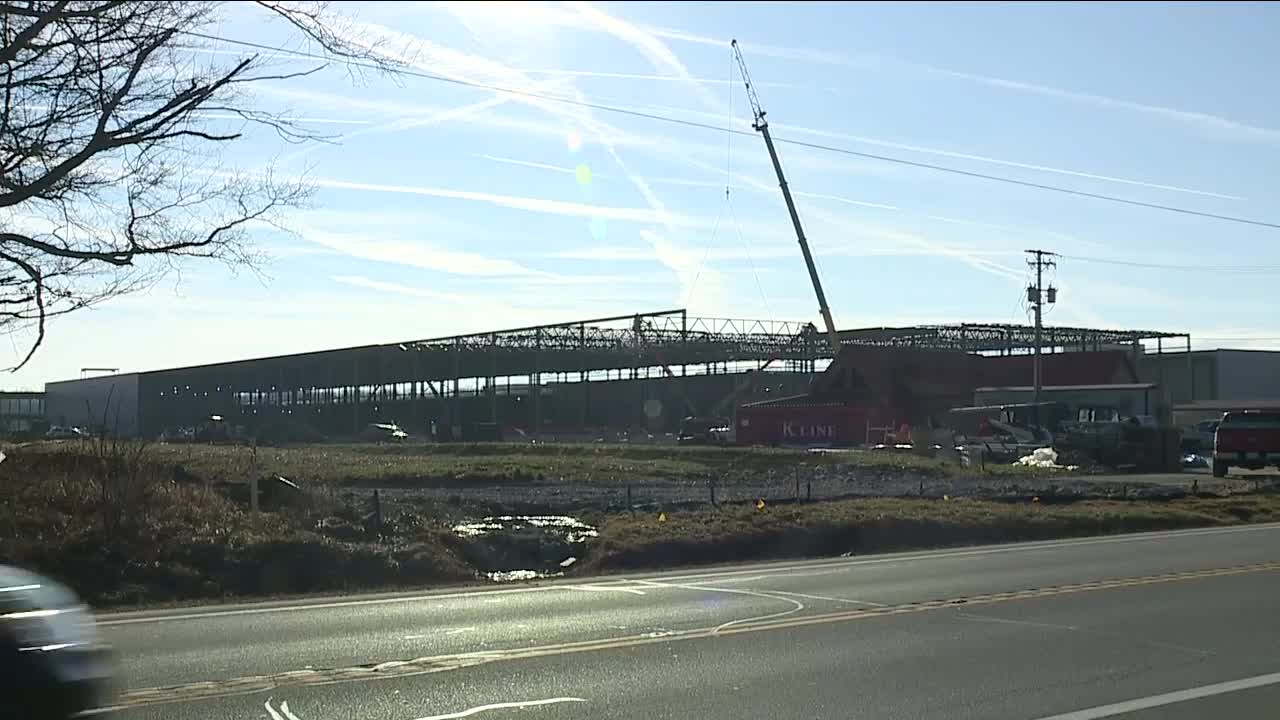 The massive expansion of a national cheese packaging and distribution company headquartered in Northeast Ohio continues to draw the ire of those living next door. 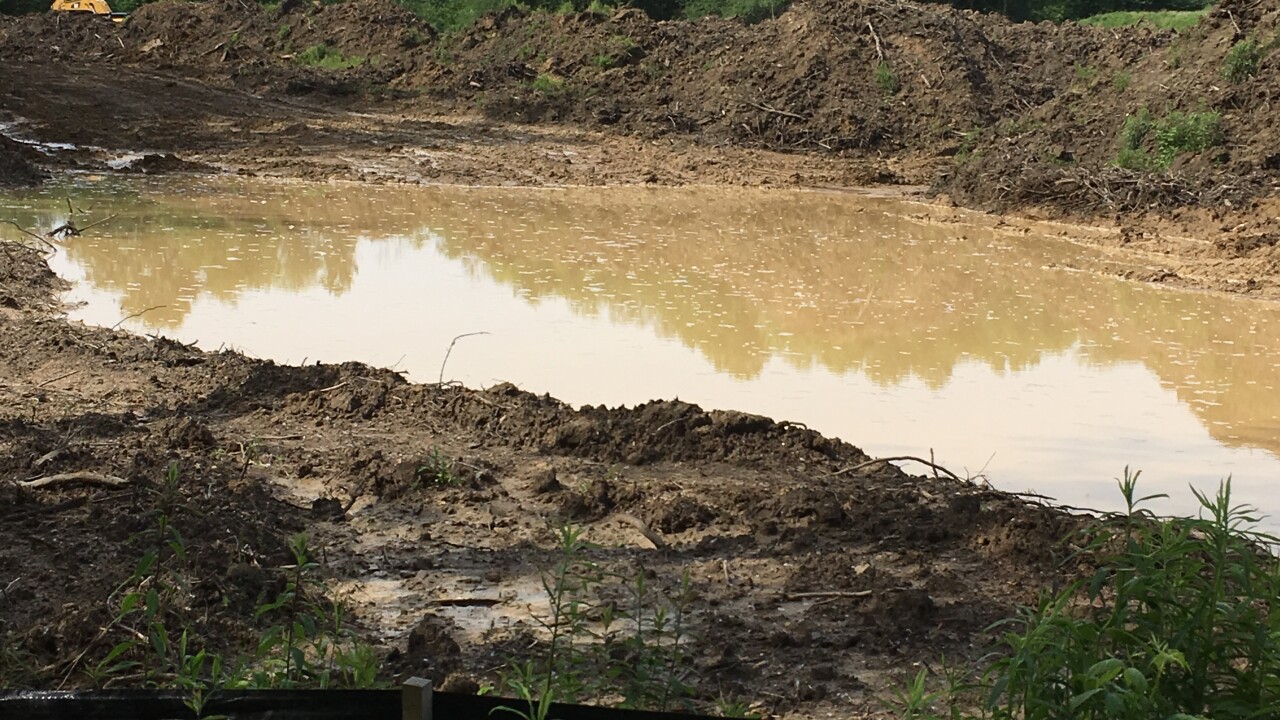 TROY TOWNSHIP, Ohio — The massive expansion of a national cheese packaging and distribution company headquartered in Northeast Ohio continues to draw the ire of those living next door. Neighbors contend the company and its contractors have acted negligently by failing to do what’s needed to protect against sediment-laden stormwater from damaging their property.

Darlene and Timothy Cox, along with Darlene’s mother, Dorothy Malkus, have filed a lawsuit in Geauga County Court of Common Pleas against Great Lakes Cheese Co., which is located in rural Troy Township outside of Hiram, after the family’s property flooded nearly a dozen times in 2019. The contractor on Great Lakes Cheese Company’s expansion, Precision Engineering and Contracting Inc., as well as the project’s designer, Dennis Group LLC, are also named as defendants.

In early 2019, excavation and construction began on Great Lakes Cheese Company’s massive expansion, which is anticipated to provide an additional 290,000 square feet of manufacturing and warehouse space. The expansion is also expected to create an additional 400 jobs on top of the 650 people currently employed in Ohio. JobsOhio has provided the company with more than $10 million in incentives.

As part of the expansion, Great Lakes acquired a tract of land that borders the Cox family’s tree-lined property. The problems started after Memorial Day, Cox said.

“The next day we had some rain storms which continued through the end of May through June and into July. With each rain storm, the silt water from the construction site flowed onto our property and into both of our ponds. By mid-July both ponds were completely brown,” Cox said. “Our livelihood in the summer is swimming and fishing with our grandkids and our kids. We weren’t even able to use them this year.”

Photos and video provided to News 5 shows sediment-filled streams of stormwater exiting the construction site, flowing into the family’s two ponds, which were subsequently turned into a turbid, milky-brown color. The stormwater also killed several fish and tadpoles in both ponds, Cox said.

Moderate to heavy rain events caused varying levels of flooding and sediment run-off at least 11 times in 2019, according to Cox’s written complaints to the Troy Township Zoning Commission. Cox said the number of flooding events is actually much higher than that.

“It is very infuriating. It should have never come to this at all,” Cox said. “You think there is planning done way before what happened… It doesn’t sound like anything was planned the way it should have been.”

Acting on a complaint, the Ohio Environmental Protection Agency conducted an inspection of the site in early June. After a tour of the area, environmental regulators found Great Lakes Cheese Co. and its contractors and designers in violation of state regulations, according to the state inspection report.

According to correspondence dated September 19, 2019, state regulators determined the violations had been resolved. However, by that time, the Coxes claim their property became inundated by floodwaters coming from the construction site a total of 10 times.

In a letter sent to the state, a representative of Dennis Group blamed the issues on the unusually rainy spring and early summer.

“We realize that inclement weather is a reality in northeastern Ohio, but the 10 days that preceded the Ohio EPA visit on June 4th, rainfall exceeded the average historic levels, according to National Oceanic and Atmospheric Administration (NOAA), thus compromised construction activities and delayed the installation of [sediment control devices] and caused excessive discharge of sediment-laden runoff,” the representative wrote.

All three companies have denied the allegations contained in Cox’s lawsuit and have not responded to requests for comment. The lawsuit seeks compensatory damages of at least $25,000.

The issues with stormwater are only one part of the Coxes case, however. In the lawsuit and during interviews with News 5, the Cox family is particularly frustrated by what they considered to be excessive sound levels and bright lights coming from the construction site.

According to the lawsuit, construction crews routinely begin working before 7 a.m. every day and it does not cease until after 6 p.m. On certain days, construction starts as early as 5 a.m. and doesn’t end until after 8 p.m., the lawsuit states. The "extremely loud" construction noises have interfered with the Cox family’s daily lives, they said.

According to Troy Township’s zoning resolutions, no use of real property will be permitted if it becomes offensive due to ‘cinder, dust, noise or gas.’ The resolutions also prohibit the use of property if it interferes with adjacent landowners’ enjoyment of the use of their lands. Cox has submitted nearly a dozen complaints to the township’s zoning commissioner, who is required by township code to properly investigate within 30 days. The part-time zoning commissioner, Joe McDougal, said the complaints are still under investigation.

Once complete, the Great Lakes Cheese Company’s expanded facility will feature a six-foot-tall earthen berm with trees. There will also be a 25-foot gas easement between the berm and Cox’s property. However, Cox remains concerned that the berm will do very little to shroud the light and noise coming from the property, which will feature more than a dozen shipping bays and frequent truck traffic.

“I don’t know if it’s just because we are the little guy and they are the big guy,” Cox said. “It just seems like they are getting away with a lot more than any other person would.”