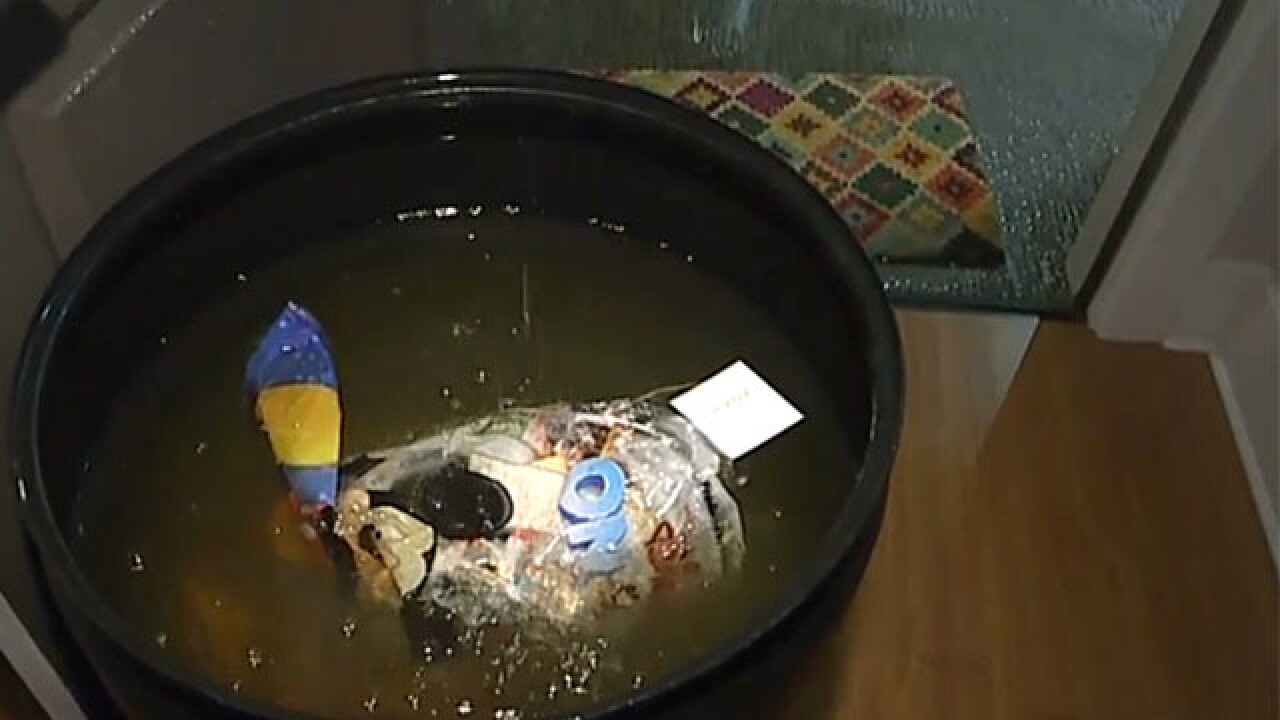 It happened again. Monday night, residents at an apartment building in Beachwood were forced out of their homes because of a water main break tied to the building's sprinkler system.

Multiple apartments were flooded and residents at The Vue, say Monday night's incident marked at least the sixth time this has happened.

Comet Management, a Stark Enterprises' affiliate, confirmed in a statement that 19 apartments at the Vue have been flooded from various water main breaks, with water pouring from lights and vents in the ceiling. This, after loud alarms have been blaring at the complex for weeks.

"You've got people who've lost their homes, you have people who have families and don't have a place to go and it's a shame, it really is," said Nidhi Patel, a resident at the Vue.

RELATED: Former management company for Beachwood luxury apartments says they were in good shape when sold

Patel and her family were forced from their apartment Monday after water began pouring from the ceiling. With the help of some neighbors, Patel moved what she could, into a flooded hallway, in an attempt to save it.

"Nobody's come out from management, nobody's come up even from the front desk to see what they can do to help us. It seems like one of the maintenance guys came to help us and that's about it. We don't know what's going to happen right now," she said.

It's happened AGAIN. Sprinkler System at the Vue apartments has busted and flooded several apartments... residents tell me this is at least the eighth time this has happened, flooding 16 apartments on the 1st floor @WEWS pic.twitter.com/d9GvGnhuLx

The luxury apartment complex in Beachwood, where some residents pay well over $2,000 a month in rent, for weeks, has been plagued with problems. According to residents, representatives from the management company and the building's ownership have not quelled concerns.

"We both have full time jobs, so it's very difficult for us to stop our lives to take care of something like this," said Patel.

Stark Enterprises, the management company and Strategic Properties, the owner, provided these statements to News 5 Monday:

STATEMENT FROM STARK ENTERPRISES REGARDING THE VUE APARTMENT HOMES

Stark Enterprises’ apartment management affiliate, Comet Management, continues to address and correct the problems brought about by frigid weather in The Vue, a luxury apartment community in Beachwood, and we have just been made aware of an additional fire sprinkler system pipe bursting this evening, impacting four additional apartment units.

The Vue has a total of 348 apartment units, 19 of which have been impacted because of the extended sub-zero weather we have all been experiencing. We have been offering affected residents other accommodations and will make the same offer to the people impacted tonight. Some residents have been relocated to other units, while some have sought out their own temporary accommodations.

We feel horrible about this, it’s completely unacceptable to us, and we vow to get to the bottom of the underlying problem and fix it. We apologize for the inconvenience this has caused some of our tenants, and though we know it is difficult, we ask them to be patient as we work through these issues to remediate them, and work to prevent them from happening again. Comet’s policy is to address issues for its tenants as expeditiously and as quickly as possible.

The week of January 1st brought frigid temperatures and related issues to many buildings around the country. The sub-zero weather caused bursting water pipes from the sprinkler system on the first and second floors. Common hallways on the first floor, the fitness center, and our children’s activity center have also been impacted. Comet Management will continue to vigorously advocate on behalf of the residents of The Vue, and Comet is committed to achieve the best remedy possible for the residents of The Vue, as quickly as possible.

Stark Enterprises has a long and honorable record of first class, award winning, management of the apartment, office, hotel, retail, and mixed use developments that it develops, builds, and owns.

STATEMENT FROM STRATEGIC PROPERTIES OF NORTH AMERICA REGARDING THE VUE APARTMENT HOMES
The Vue is owned by Strategic Properties of North America (SPNA), a National Real Estate investment firm with headquarters in Chicago Il and Lakewood NJ. SPNA purchased The Vue from NRP of Cleveland in 2016.

SPNA has identified Cleveland as a potential new market to expand its investment portfolio and chose The Vue in Beachwood to determine the strength of the Cleveland market. SPNA selected Comet Management, Stark Enterprises’ apartment management affiliate, because of its sterling reputation and commitment to excellence and because of Stark’s storied commitment to advancing investment in Cleveland.

Since the time Comet was first hired, as third-party manager, a number of latent construction defects began to appear. Preliminary expert analysis of recent frigid weather damage to The Vue suggests these issues were likely the result of original building defects. The building was originally developed and built by NRP of Cleveland, and these latent defects are surprising, given the NRP’s reputation for quality construction.

A representative from the management company did show up to speak with tenants Monday night.
Monday night saw temperatures around 26 degrees, not below zero as the statement claims.

Residents said Monday they are in contact with officials from the City of Beachwood to see at what point they can step in and try to fix the issues they've been experiencing.