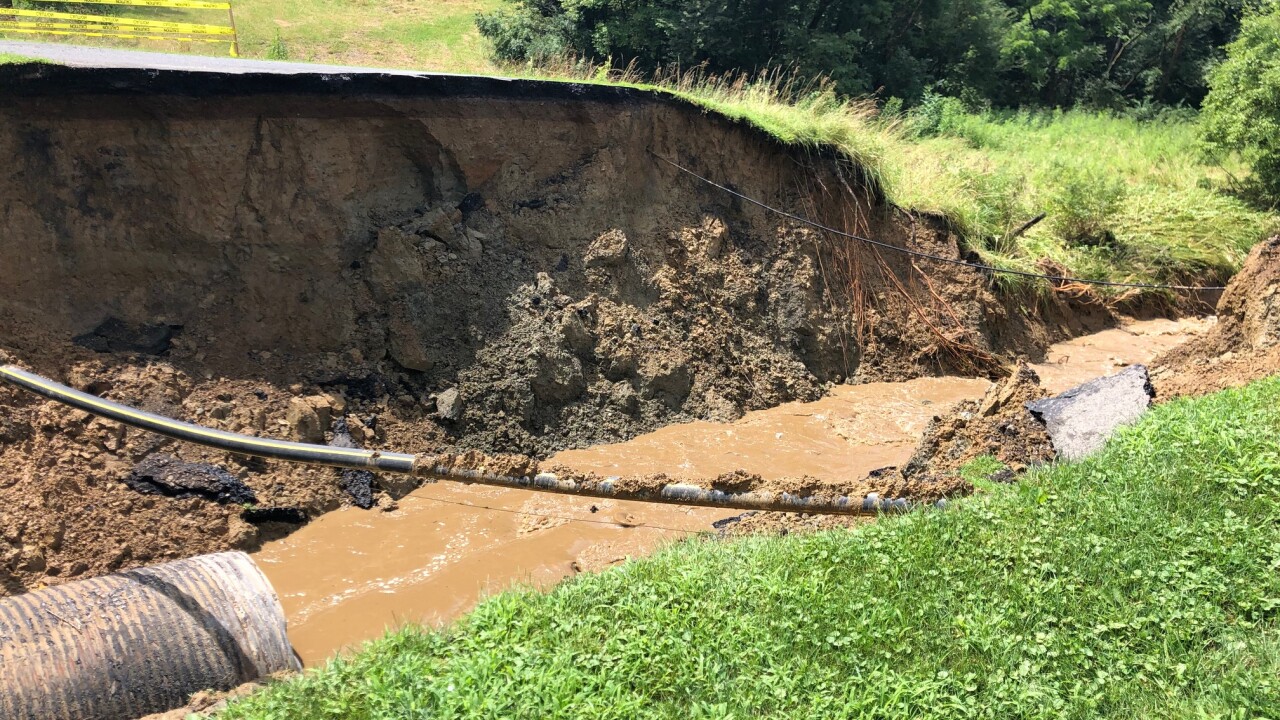 WOOSTER, Ohio — After severe storms walloped parts of Wayne County Sunday night, residents began to take stock of the damage left behind by ferocious flash flooding. Prompted by more than four inches of rain in a matter of a few hours, the flash flooding washed out roads, homes and businesses, especially in areas south of Wooster and in the central part of the county.

Radar indicated at least 4.5 inches of rain inside Wooster’s city limits with other areas potentially receiving as many as six inches of rain over the course of six hours. The torrential rain inundated streams, creeks and tributaries, causing flash flooding in areas that don’t typically flood. On McCoy Road, just south of Wooster in Franklin Township, the rushing waters eroded away at a culvert underneath the roadway. Eventually, the water carved a 15-foot deep canyon in the middle of the road.

Capt. Doug Hunter from the Wayne County Sheriff’s Office said it is extremely fortunate that the washout did not happen after dark.

“Even if the roadway was not flooded and you came down this roadway in the dark with no streetlights, it’s a very dangerous situation. We’re very fortunate this took place in the daytime,” Capt. Hunter said. “We were able to get crews to the area to prevent an unfortunate mishap.”

Residents in the area of McCoy Road, an area that doesn’t typically experience localized flooding, had water seeping into their basements.

“It was like somebody was dumping a bucket of water and was continuing,” said resident Jim Moyseenko. “Amazing how Mother Nature can do things like this and you can’t stop it or prevent it. You just hope for the best. We didn’t expect that we were going to get that much rain over a lengthy period of time and it kept pouring down.”

“We’re used to some generalized flooding in our area but not the flash flooding,” Saley said. “There is more velocity and power in those waters than a rising flood so it created more structural damage like we’re seeing.”

The Wooster chapter of Loyal Order of Moose Lodge, a private club, suffered extensive damage in Sunday’s flooding. The rising waters eroded away the support structure underneath the front facade of the building, causing it to collapse. However, the contents of inside the local watering hole, including the bar, barstools and jukeboxes, remained untouched.

Elsewhere on North Bauer Road, many of the mobile homes were inundated with water. Residents began the painstaking process of assessing the damage and throwing away what wasn’t salvageable.

Despite the extensive flash flooding, Saley said residents heeded the warning of "turn around, don’t drown."

“We didn’t have to do any rescues of cars going into the water ways which has been a problem in the past,” Saley said. “We have seen historically some concerns with cars trying to drive through high water. We didn’t have any of those rescues which is a good thing so people are heeding the warning of not driving through high waters.”