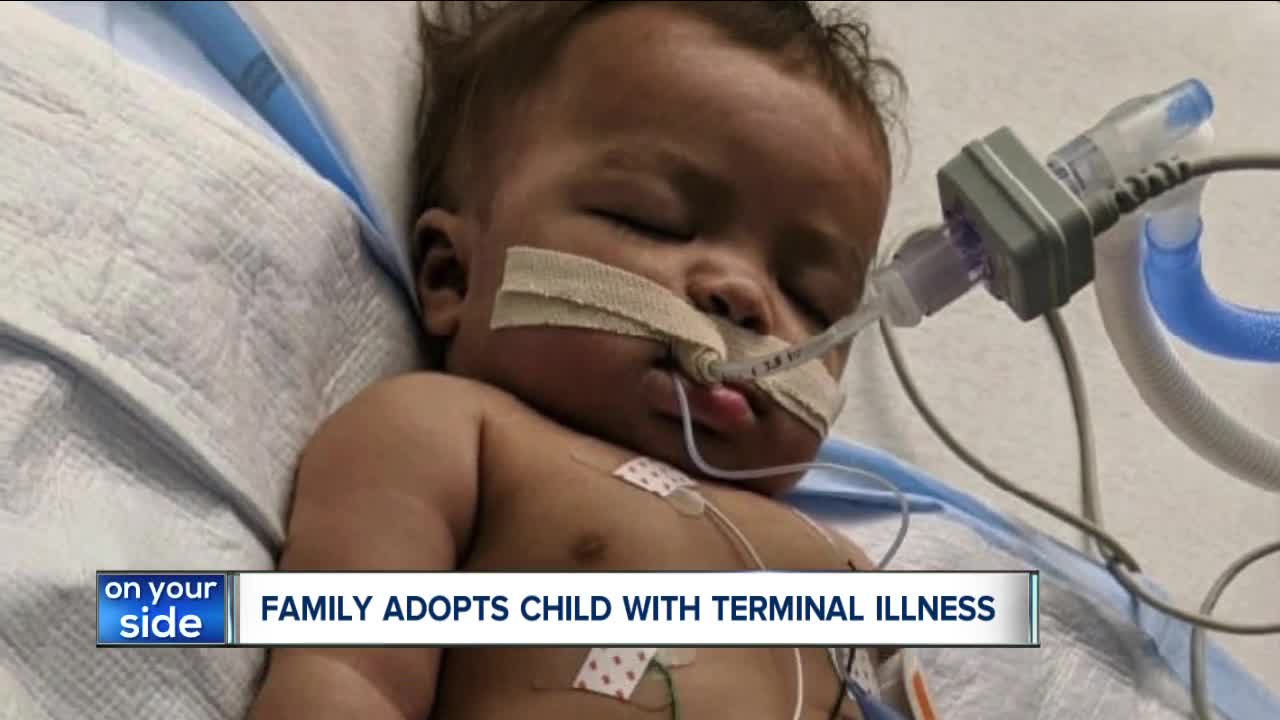 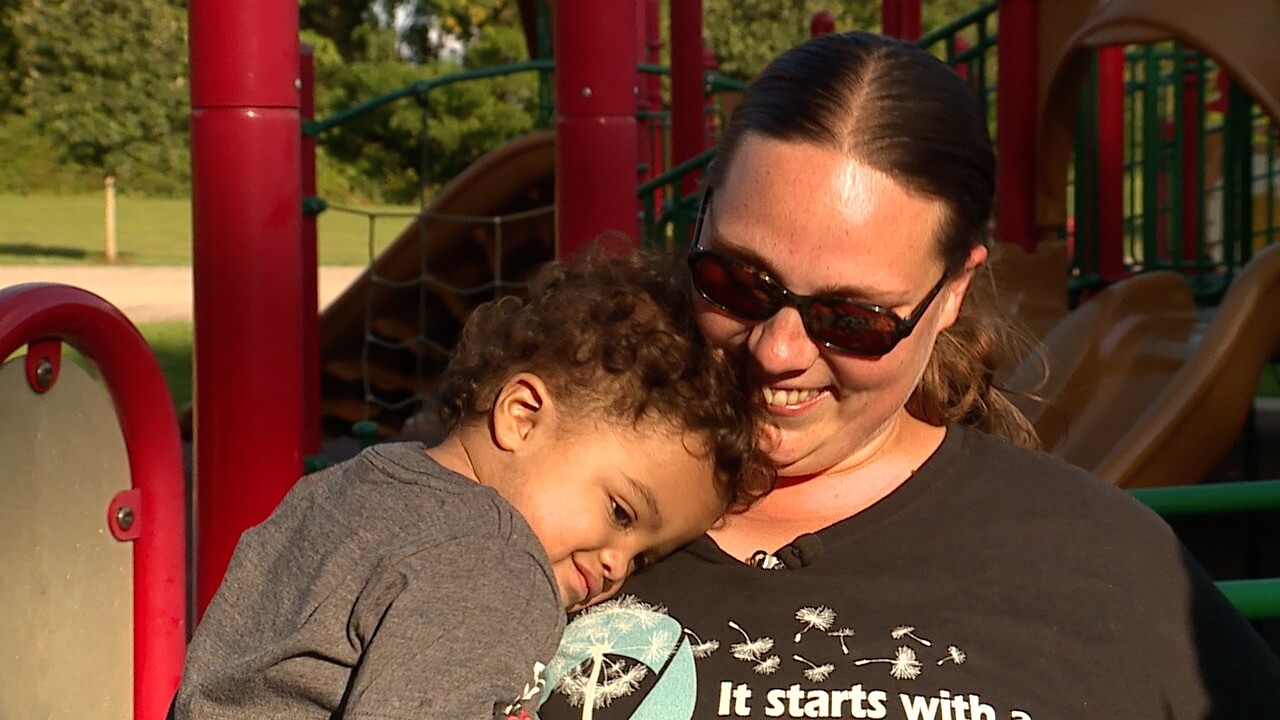 STOW, Ohio — Even as obstacles stood at every turn, a Kent family has redefined what it means to love unconditionally. Despite extended hospital stays, countless tests and a devastating diagnosis, foster parents Amanda and Vanessa Burke recently completed the adoption of their two-year-old son, Jett, and have begun championing an effort to bring awareness and a possible treatment to their son’s extremely rare disorder.

On a sun-splashed day in early September, the Burke family van pulls into Silver Springs Park in Stow. The sprawling park fit with playgrounds, biking trails and sports fields is the family’s favorite spot. As is the case for just about any family, driving to the park is one thing, getting out of the car is quite another.

The Burke’s three rambunctious children, Jaylynn, Maya and Jett, are eager to lay claim to the swings, jungle gyms and slides. Amanda and Vanessa are just trying to keep up with them.

Amanda and Vanessa are quick to say their budding, joyful family isn’t what they envisioned. Then again, perhaps the best stories are unexpected. After marrying in 2011, the Burkes began fostering children four years later. Like many foster parents, the Burkes were secretly hoping for younger children, perhaps infants, to foster. However, they were more than willing and capable of caring for older foster children.

They simply wanted the ability to nurture.

“We both kind of had thoughts of fostering and, some day, adopting,” Vanessa Burke said.

“Some day” came quicker than they realized.

The Burkes welcomed Jaylynn and Maya into their home when they were both just a few days old. Maya came with an unknown history; the little girl’s biological mother dropped her off at a hospital under the state’s Safe Haven law.

Questions aside, the Burkes cared for and nurtured the two as if they were their own flesh and blood. Jaylynn is an energetic ray of sunshine, beaming from place to place without a care in the world. Now four years old, Jaylynn is quick to make friends but is even quicker to ensure her siblings, Maya and Jett, are close by.

Maya, the reserved but energetic girl, blended perfectly into the family. Unlike her sister, Maya’s history was more well known; she and the Burkes remain in contact with her biological family and Maya’s older sister.

Soon thereafter, Jaylynn’s half-brother, Jett, came into the Burke home as a foster baby. The adorable and affable boy with curly and wavy hair quickly won the family over. They were smitten by his jovial smile, but it didn’t take the Burkes long to begin noticing things about the baby boy that didn’t quite seem right.

“When he was born, he had kind of a rough time,” Amanda Burke said. “He was pretty colicky and fussy but otherwise he seemed genuinely healthy.”

Their concerns about his mis-shaped head and oddly-spaced toes began to carve the pieces of a puzzle that took nearly a year to come together.

“I remember his breathing issues. I’d wonder, ‘Why is he breathing so hard? He’s not doing anything. He’s just sitting there and he’s huffing and puffing,'” Vanessa Burke said. “He would go to the hospital and come home and he would have all of these new sicknesses.”

“Every day we would just stand over his bed and look at each other and say, ‘We don’t know if he is going to die,” Amanda Burke said. “As crazy sounds, him being born into foster care might have saved his life.”

After 10 months of endless hospital stays, countless tests and mis-diagnoses, the Burkes finally had their answer. Sure, the diagnosis provided relief in the form of an answer to their longstanding questions. Then came the reality.

In late March and early April of 2018, then 9-month-old Jett Burke was diagnosed with MSD, or Multiple Sulfatase Deficiency . MSD is an extremely rare, hereditary disorder that has less than 100 known cases worldwide. Children with MSD are born without the proper enzymes that remove waste from working cells. Over time, the toxic waste builds up in the cells, eventually causing them to die. Cell by cell, function by function, organ by organ the body eventually shuts down. No child with the disorder has ever lived past the age of 10.

“The geneticist asked if I wanted to know. I said yes. I remember crying in the bathroom,” Amanda Burke said.

Because MSD is so rare, many physicians aren’t necessarily looking for it when initially testing an infant. Complicating matters further, children with MSD at first appear generally healthy. Because the onset of Jett’s symptoms appeared to have started so early, doctors anticipated Jett wouldn’t live past the age of two.

“He’s just this ornery two-year-old and we’re hoping he stays this way for as long as possible,” Amanda Burke said. “We didn’t think we would ever see him walk or talk or be able to moderately eat a french fry or laugh or smile. He couldn’t do any of those things.”

Through the dedicated work of an army of physicians and specialists, in addition to hours and hours of physical therapy, Jett is thriving. With specialized braces around his ankles, the perpetually-moving toddler can travel around a playground with ease, whisking himself from swing sets to slides. He’s always smiling and laughing, too.

The Burkes knew what they had to do: they officially adopted Jett and his half-sister Maya last month. Their love was unconditional.

“We want to keep siblings together. I don’t think we could imagine taking her from him and taking him from her,” Amanda Burke said. “Whether a child has a disability or they have trauma, whatever it might be, they all need to be loved and in the right home.”

With the help of the United MSD Foundation , the Burkes have become champions of advocacy. Through a special Facebook page (Ready Set Save Jett) that documents Jett’s adventures, the Burkes have quickly connected with other parents of children with MSD. Amanda Burke lauded the foundation for quickly welcoming their family. The Burke family even recently visited the Grand Canyon with another family with an MSD child.

“They’ve just welcomed us without hesitation. I don’t know other organizations that are available basically around the clock,” Amanda Burke said. “[Jett] got to see so many different places and do so many things. It was definitely ‘toddler crazy’ but it was really fun that he got to do that. It’s good to see the Grand Canyon. We never thought he would ever be able to do any of this.”

The Burkes have also been trying to raise as much money as possible for the United MSD Foundation. The non-profit is in the middle of a fund raising drive to raise money to order clinical trials of a possible treatment, which includes gene replacement therapy.

The Burkes will be celebrating the adoption of Maya and Jett on Saturday.