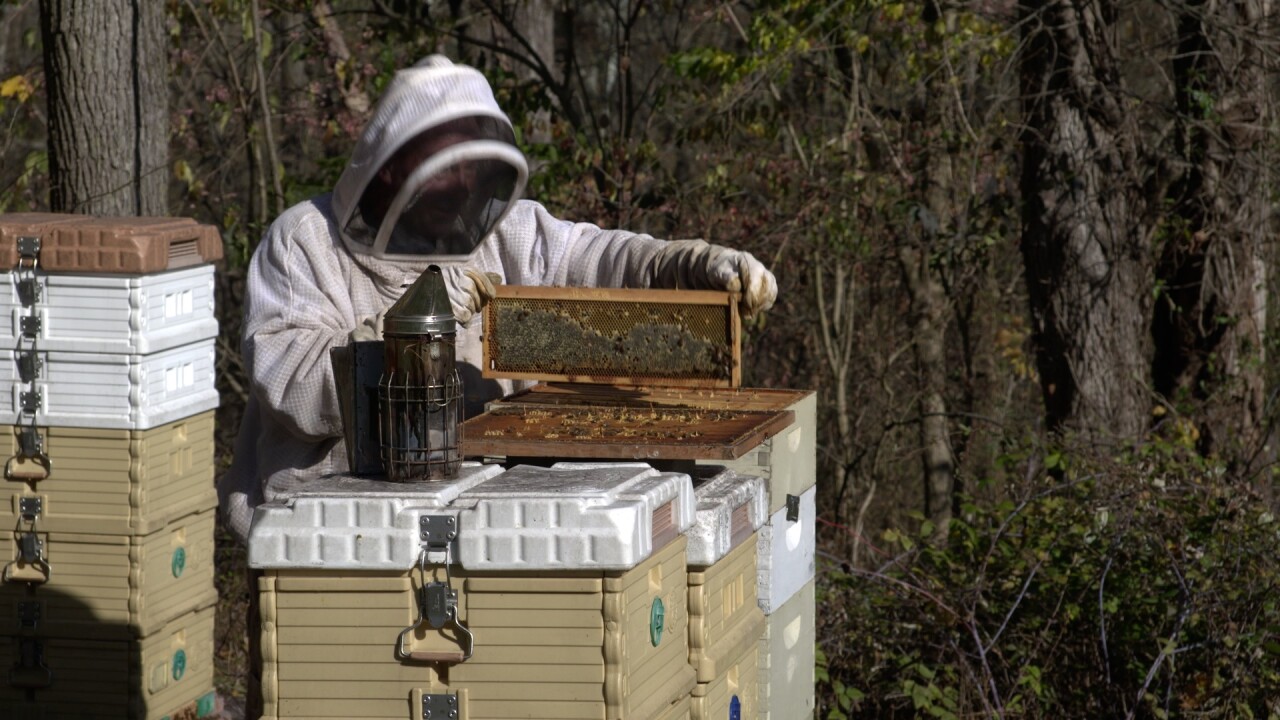 The endless hum of the hive calls to Chuck Pressler. Each day, he visits the thousands of bees living in his backyard. It’s an appointment he hasn’t missed in years.

“It slows you down,” said Pressler.

The Navy veteran served four years during the Cold War. Pressler worked in a submarine unit, and now, he works as an EMT. He’s been called to help others in both his careers, but both have come with a price.

“It is a sacrifice,” said Pressler. “Whether it's coming back from war, or whether it's dealing with things at home: police, paramedics, firemen, EMT, dispatchers. There is a lot of things that weigh on people after dealing with this for so long. There are humans behind these shields in uniform.”

But Pressler found a unique way to take his mind away from the stress: tending several beehives in his backyard and harvesting the honey they produce.

“You find yourself talking to them a little bit, and you forget about everything around you while you're doing it, and you're just paying attention to the bees,” said Pressler.

He knew the calm he found had to be shared.

“From my own experience of how I enjoy it, I discovered that it could be a tool, an actual tool for those that have either experienced PTSD, or just something to take them from their past experiences or their current everyday job.”

Pressler started the non-profit Honeybees for Heroes to give other veterans and first responders a chance to ease the traumas they live with every day.

“You know it's a brotherhood, sisterhood. It’s all a big family in the end, and everybody sticks together, and I think being around each other and talking, even in general, and dealing with honeybees is, is working towards getting past it,” said Pressler.

For so many veterans, talking about mental health and PTSD can be a tough thing to do. That’s why coming out here and focusing on the honeybees can be so healing.

“Generally, we don't talk about it unless they bring it up. I try not to revisit any ghosts or bring up any memories. The object is just to let them find their pace.”

Pressler now works with a handful of veterans in his own neighborhood one-on-one, even setting them up with their own hives.

He says many veterans feel misunderstood and alone, and he wants to be there to help.

“Let's be honest, there is a stigma behind it, and people start to look at you like, you know, you're crazy. It's important for the community to know, on a bigger broad scale, that it's OK to deal with these issues and that the people that do these jobs are human and that it requires a human to make these sacrifices to do it,” said Pressler.

Pressler said the call to serve is worth every sacrifice, and it’s a mission that doesn’t end when you leave the military.

“All of us first responders, veterans all that, that's what we do. We help protect people,” he said.

He hopes more will soon realize: fulfilling that promise can come from the most unexpected places.

If you'd like to help, you can donate to Honeybees for Heroes HERE.