7 NFL teams chose to stay in locker room during national anthem, MVP Jackson among those who knelt 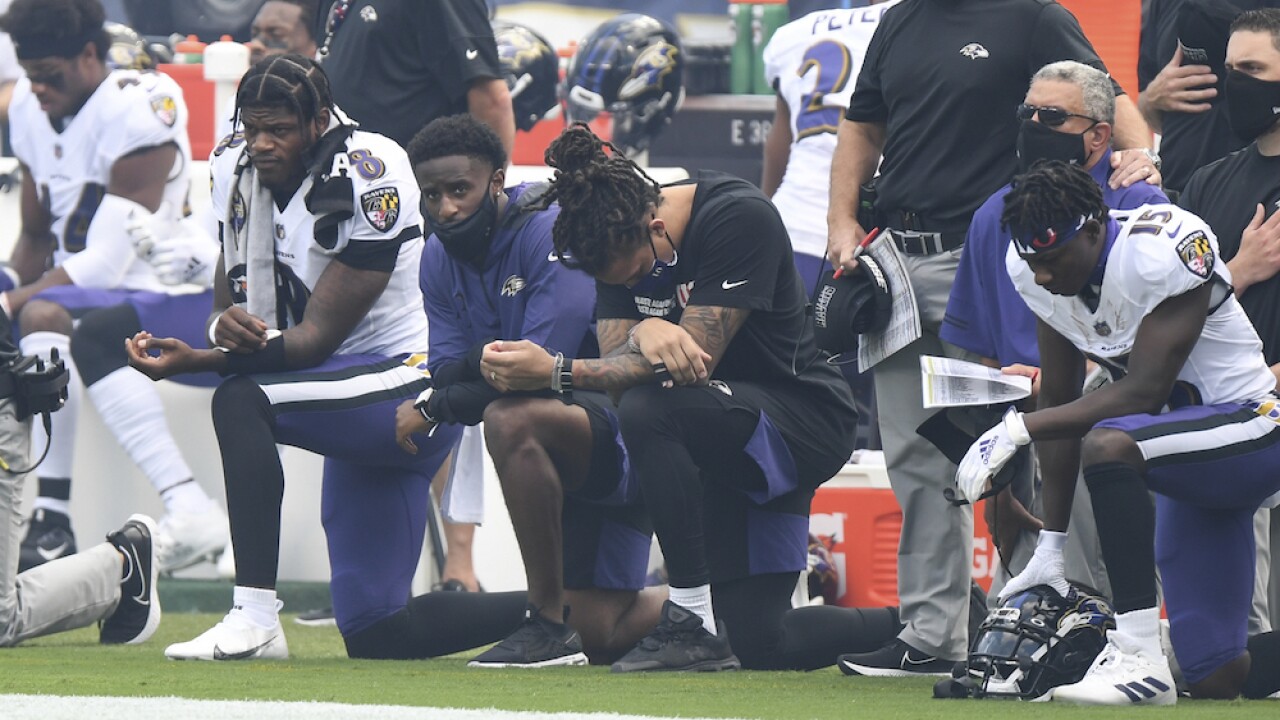 There may have only been a handful of fans — if any — in the stadium to witness it, and the national anthem was not have been performed in person. But after months of civil unrest across the country, several NFL players chose to kneel or demonstrate during the national anthem during the first slate of Sunday games in the 2020 season.

Following in the footsteps of Colin Kaepernick, dozens of NFL players took a knee during the anthem to protest systemic racism and police brutality. Other teams chose not to take the field for the anthem, choosing instead to remain in the locker room. Teams have regularly been required to be on the sidelines for the national anthem since 2009.

Earlier this year, the NFL apologized to Kaepernick and said it should have been more supportive in the former 49ers quarterback's protest. It's also allowed players to display social justice messages in pregame attire and on their helmets, and has added anti-racism messaging to the playing field.

In addition, all home teams played "Lift Every Voice And Sing," a song known as the "Black national anthem," prior to Sunday's games.

Among those protesting on Sunday was reigning MVP Lamar Jackson. The Baltimore quarterback is among the highest-profile players to demonstrate during the anthem since Kaepernick in 2016.

Below is a game-by-game list of how each team chose to handle the national anthem in week 1.

Neither team took the field for the national anthem. The Jets and Bill instead opted to head to the locker room after warming up and then returned to the field after the anthem.

Both the Jets and Bills remained in the locker room for the national anthem. pic.twitter.com/tKmsyv2XJA

A large group of Lions players opted to remain in the locker room during the playing of the anthem. Other Lions players chose to stand, while still other knelt, including quarterback Matthew Stafford, running back Adrian Peterson and defensive back Tracy Walker.

Many Bears players did not take the field. According to the Chicago Tribune, those who did and chose to kneel included offensive linemen Bobby Massie and Rashaad Coward, defensive linemen John Jenkins, Brent Urban, Roy Robertson-Harris, Bilal Nichols and Akiem Hicks and inside linebackers Josh Woods and Joel Iyiegbuniwe took a knee. Outside linebacker James Vaughters, tight end Jimmy Graham and kicker Cairo Santos raised their fists.

The Packers opted to remain in the locker room for the playing of the anthem.

The Vikings pregame ceremonies included a tribute to George Floyd, a Black man killed by police in Minneapolis on Memorial Day weekend. A moment of silence for Floyd replaced the blowing of the "Gjallarhorn," a Vikings pregame tradition.

The Dolphins remained in the locker room during the national anthem. All Patriots players who were on the field during the playing of the anthem stood at attention.

Philadelphia opted to remain in the locker room. All Washington players on the field stood, though some raised their fists as the anthem was sung.

Both teams took the field during the anthem. ESPN reports that eight Panthers players, including QB Teddy Bridgewater, took a knee. Nearly all Las Vegas players locked arms, and no players knelt.

Jacksonville chose to stay in the locker room during the anthem. On the Colts sideline, Head Coach Frank Reich was the only person to kneel.

Estimates indicated that about half of Ravens players — including MVP quarterback Lamar Jackson — knelt during the anthem. On the Cleveland sideline, defensive end Myles Garrett, safety Ronnie Harrison and wide receiver KhaDarel Hodge chose to kneel.

Despite promising to kneel earlier this year, Browns QB Baker Mayfield announced in a statement Saturday that he would be standing for the anthem this season.

Both teams took the field and chose to lock arms at midfield, as opposed to staying on their own sidelines per tradition.

All players on the field stood for the national anthem, though there are reports that Saints S Malcolm Jenkins was not on the field as the song played.

The Cardinals chose to remain in the locker room, while two 49ers players, running back Jerick McKinnon and wide receiver Richie James, sat during the anthem.

"More than a dozen" Rams players chose to take a knee, while Cowboys DT Dontari Poe was the lone Cowboy not to stand during the anthem.