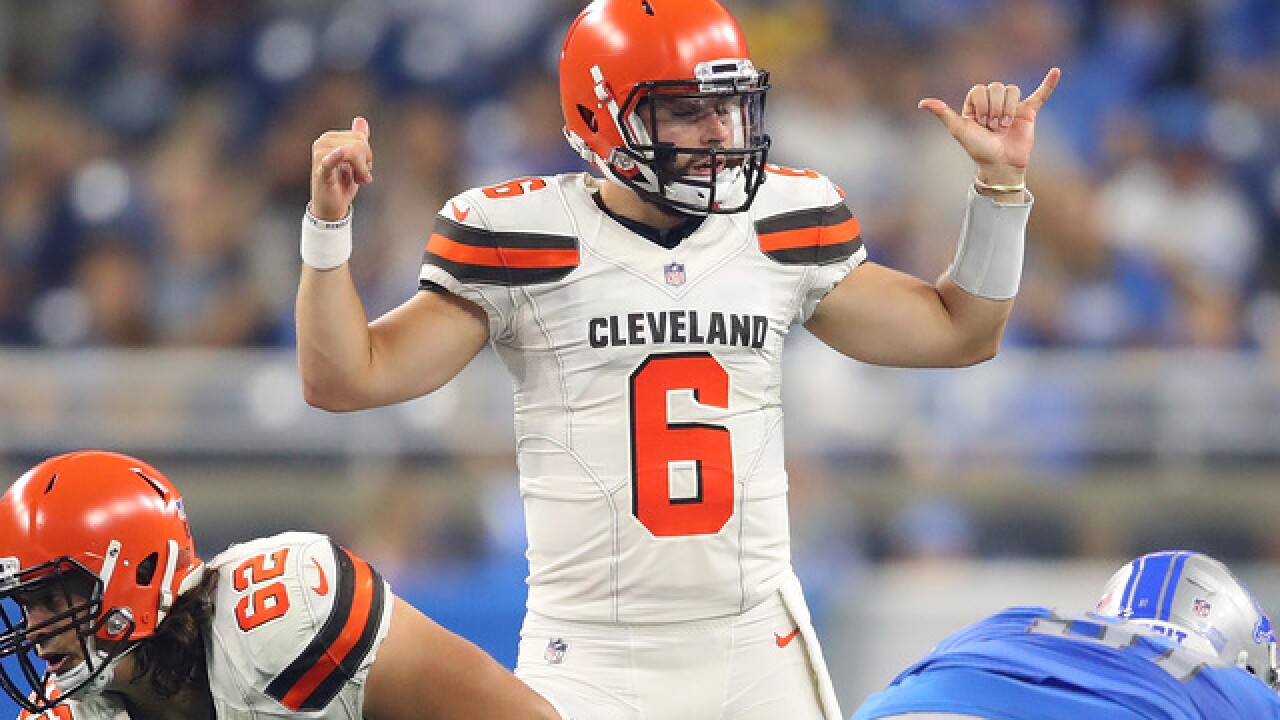 Image copyright 2018 Getty Images. All rights reserved. This material may not be published, broadcast, rewritten, or redistributed.
Gregory Shamus
<p>DETROIT, MI - AUGUST 30: Baker Mayfield #6 of the Cleveland Browns calls signals during the first quarter while playing the Detroit Lions during a preseason game at Ford Field on August 30, 2018 in Detroit, Michigan. (Photo by Gregory Shamus/Getty Images)</p>

But when the media approached Mayfield soon after, he tackled the questions head-on. With a smirk occasionally on his face and calmness throughout a barrage of questioning, Mayfield appeared to be unafraid of criticism, conflict or even a little drama.

Somehow his swagger came across even though he was standing still, reminding everyone that he is not your typical NFL quarterback.

“Although I am an athlete, I am not a cookie-cutter quarterback. I never have been and never will be. I speak my mind. That is just how I am,”   Mayfield said with confidence.

Mayfield has always been different.  His stature, his personality and his unusual path to the NFL doesn’t fit the mold or resemble his peers or predecessors.

Most elite quarterbacks are coddled as children, envied in high school and highly coveted by colleges.

He walked on at Texas Tech before transferring to Oklahoma, where he ultimately received a scholarship.

Proving his doubters wrong, he became the 2017 Heisman Trophy winner.

The Texas native knew he was dangerous before most so-called experts saw any warning signs. That self-belief allowed his talent to shine and persevere, leading the Browns to choose him with the 2018 number-one overall pick.

“Right now, I am not going to get complacent. I am getting a fresh start in Cleveland, and I couldn’t be more excited about it,”  Mayfield said shortly after being drafted by the Browns.

Even though Mayfield achieved in college, many still doubted whether the 6-1 undersized quarterback could thrive in the NFL. New England’s Tom Brady is 6-4, Kansas City’s Pat Mahomes is 6-3 and Carolina’s Cam Newton is 6-5.

“It is not about your size; it is about winning, it is a mentality and leadership qualities,” Mayfield said.

In his rookie campaign so far, Mayfield has played in nine games and has thrown for 2,242 yards and 17 touchdowns.

Coming off a winless season, the Browns are currently 4-6-1 and on a two-game winning streak.

Mayfield has coupled his on-the-field success with his off-the-field persona.

His press conferences are humorous and his opinions are not always polite. He possesses a fire on the field and a bravado in the locker room, that appears to be igniting the players around him.

“He is funny. He is outgoing. No matter if we win lose or draw he would still be himself. Every day he comes to work and that is what we respect the most,” Browns wide receiver Rashard Higgins told News 5.

Mayfield is not a straight-faced Tom Brady or reserved like future hall-of-fame quarterback Peyton Manning. But Mayfield made it clear he is not trying to emulate anyone.

“I am never trying to be anybody else. I am going to be the best version of myself. That is what has got me here,” Mayfield said.

As Mayfield navigates through an eventful rookie season, he is letting it be known that he is not going to adhere to unspoken rules or be silenced by fear of a media firestorm. Instead, he is going to lead the locker room the same way he has risen through the ranks, by being comfortable, even if the cost is controversy, with who he is, what he offers and the way he manages to get his teams to win.