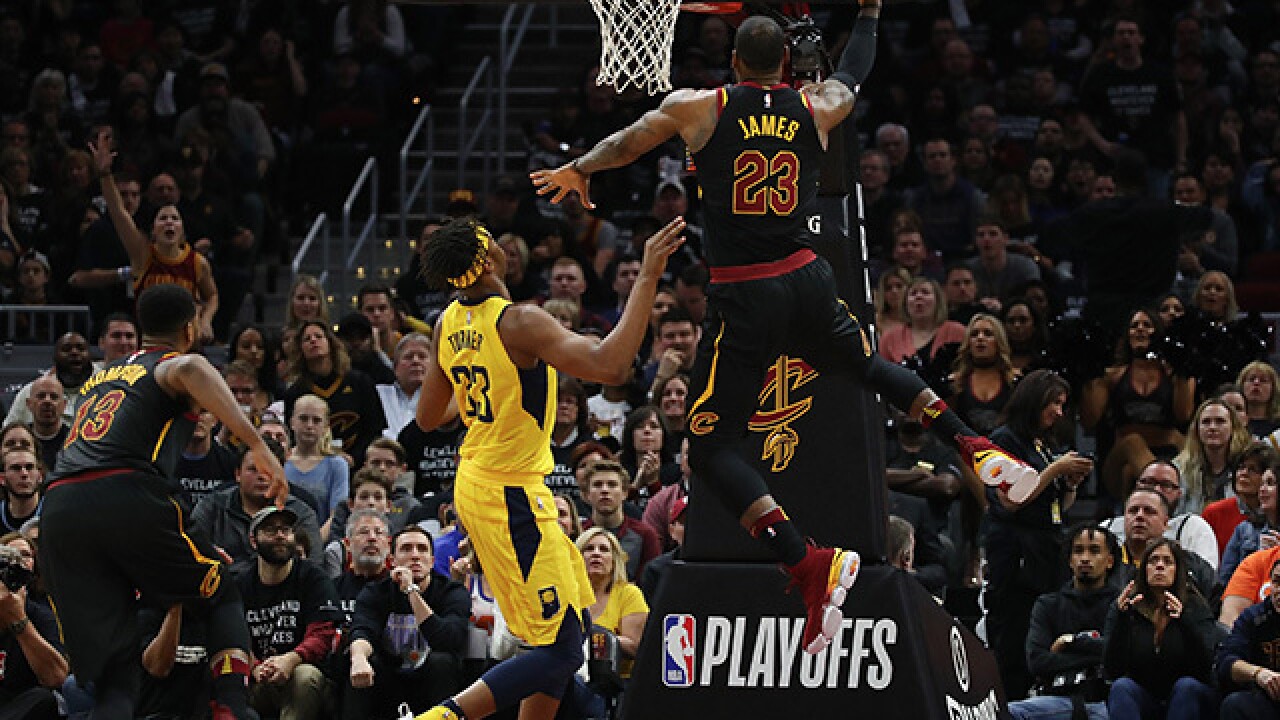 LeBron James scored 45 points and got some needed help in Game 7 to stay unbeaten in the opening round of the NBA playoffs, leading the Cleveland Cavaliers to a 105-101 win over the Indiana Pacers, who pushed the game’s best player to the limit.

James improved to 13-0 in the first round and kept Cleveland’s strange season alive — for the time being. It took everything James and the Cavs had to hold off the Pacers, who were swept by Cleveland a year ago and came in confident after a 34-point win in Game 6.

The Cavs will open the conference semifinals on Tuesday at top-seeded Toronto.

James played 43 minutes, leaving late in the third quarter and heading straight to the locker room to be treated for cramps. The 33-year-old was going to leave it all on the floor in what some Cleveland fans feared could have been his last game with the franchise.

Tristan Thompson made a rare start for the Cavs — Cleveland coach Tyronn Lue used his 34th different starting lineup this season — and added 15 points and 10 rebounds. Kevin Love made four 3-pointers, and George Hill returned after missing three games with back spasms to score 11 in 19 second-half minutes.

Victor Oladipo scored 30 and Darren Collison had 23 for the Pacers, who were still within four points in the final minute before a cutting James scored on a bullet pass from Kyle Korver with 30 seconds left.

Oladipo hit a 3 at the horn and was immediately embraced by James, who had never played a Game 7 in the first round and wasn’t about to let Indiana end his run toward an eighth straight Finals.

It was the first Game 7 in Quicken Loans Arena history, and Cleveland fans were on edge from the start.

A loss would not only have ended the Cavs’ season earlier than expected and their reign as three-time conference champions, but would have pushed James closer to free agency. He’s expected to opt out of his contract in July to test the market, and there’s already a line of teams stretching from Philadelphia to Los Angeles looking to sign the three-time champion.

After the Cavs were rocked in Game 6 at Indianapolis, Lue knew he needed to shake things up.

So he switched his starting lineup for the fourth time in the series, going with James, Korver, Thompson, Love and J.R. Smith. Thompson had played just 24 minutes in the first six games of the series and made his first start since March 28.

It was the first time Lue used the starting lineup all season, and in the season’s biggest game, he went with the players he trusts most — James, Love, Smith and Thompson are the only holdovers from the three Finals teams.

Thompson made an immediate impact, scoring six points and seven rebounds, and behind James’ 26 points, the Cavs built an 11-point halftime lead.

Pacers: Both Myles Turner and Domantas Sabonis fouled out. ... Lance Stephenson picked up his second technical of the series when he hit James in the head on a first-quarter drive. ... Dropped to 3-6 in Game 7s, with all of the losses coming on the road.

Cavaliers: James won his fifth straight Game 7. ... By picking off a pass midway through the second quarter, James became the career playoff leader in steals. He entered the game tied with Scottie Pippen (395) for the most postseason thefts. ... Celebrated the 42nd anniversary of the “Miracle at Richfield” in 1976, when the Cavs defeated the Washington Bullets in Game 7 of the conference semifinals. Cleveland’s fans stormed the court and tore down both baskets.

Pacers: Head into an offseason with optimism after their strong showing.

Cavaliers: Will meet the Raptors for the third straight postseason.