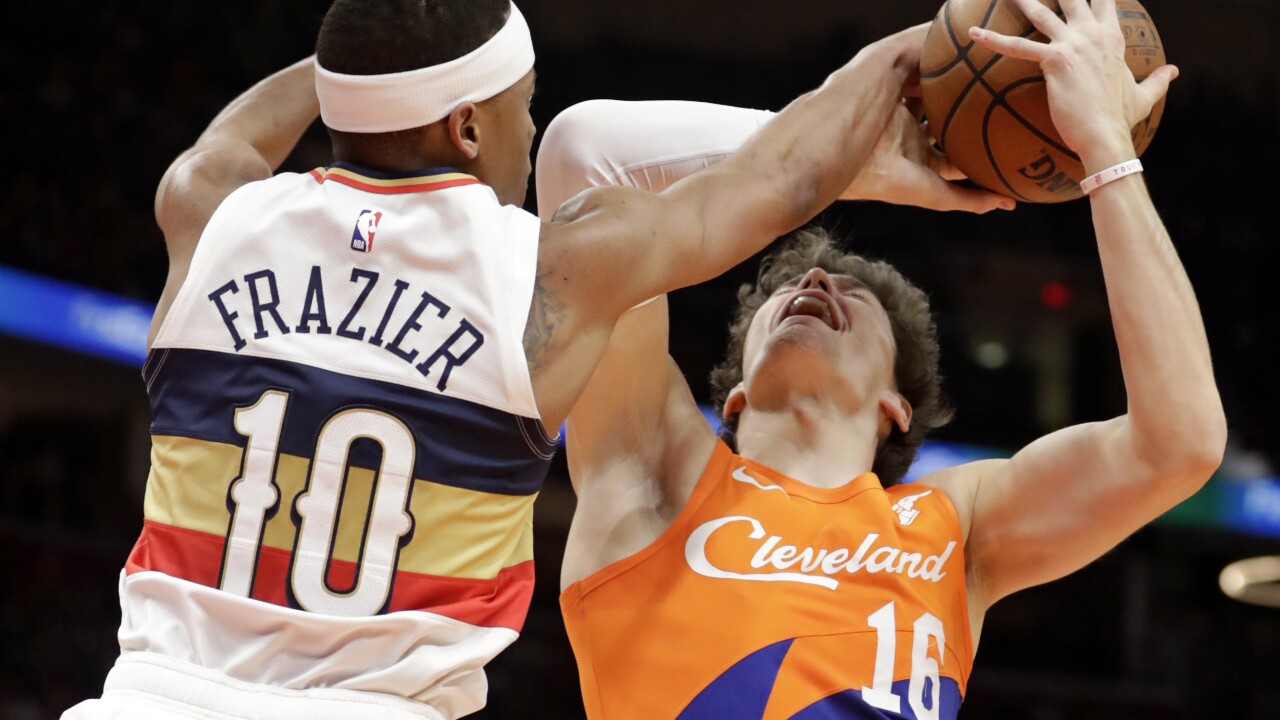 (Copyright 2020 The Associated Press. All rights reserved. This material may not be published, broadcast, rewritten or redistributed.)
Tony Dejak/AP
New Orleans Pelicans' Tim Frazier (10) blocks a shot by Cleveland Cavaliers' Cedi Osman (16), from Turkey, in the first half of an NBA basketball game, Saturday, Jan. 5, 2019, in Cleveland. (AP Photo/Tony Dejak)

Instead, Cleveland’s ninth straight loss was its most lopsided of the season.

Jrue Holiday and Julius Randle both scored 22 points, and the New Orleans Pelicans routed the Cavaliers 133-98 on Saturday.

The defeat came a night after Drew and his players had a long talk following a 26-point loss to Utah. Cleveland (8-32) not only has the worst record in the league, but hasn’t played competitive basketball during most of the losing streak.

“We knew they played last night, so for us, we wanted to get out and run more to get them tired,” said Pelicans star Anthony Davis, who didn’t play in the fourth quarter. “We know they’ve been struggling in third quarters, so we went out hard.”

The Cavaliers have lost six straight at home by a total of 141 points. The last five defeats have been by 20 or more points, an NBA record.

Drew benched four starters when New Orleans began the third quarter with a 15-0 run, which likely will lead to lineup changes when Cleveland hosts Indiana on Tuesday.

“We can’t continue to go at this rate,” Drew said. “I refuse to. It’s important these guys understand that, one, this is not acceptable and, two, I’m not going to let this continue at this pace. I’ve got to do something different.”

Center Tristan Thompson has gone from playing on a team that reached four straight NBA Finals to one that seems to get blown out every night.

“It definitely tests your character,” he said. “If you love the game and you care about being a competitor, you’re going to hate times like this. You’re going to have sleepless nights and it’s gong to mess with you.”

Davis had 20 points and 10 rebounds. Randle had 12 rebounds and six Pelicans scored in double figures.

New Orleans’ third-quarter run pushed the lead to 76-52, and Larry Nance Jr. was the only Cleveland starter who remained on the floor. The margin grew throughout the second half and reached 39 points at 132-93 in the last two minutes.

Davis set a franchise record with 26 rebounds and scored a game-high 34 points in Wednesday’s loss to Brooklyn. Nance and Thompson each picked up two fouls in the first eight minutes trying to defend the All-Star forward. Channing Frye, who had played in only 18 games, came off the bench and also fouled Davis.

New Orleans broke away from a 28-all tie with Davis getting a rest. Holiday had nine points in the quarter and Randle added seven, helping the Pelicans build a 61-52 halftime lead.

Cleveland’s injury problems have been a major factor in its season-long struggles. All-Star forward Kevin Love has started some basketball activities after surgery on his left foot in November, but there’s no timetable for his return.

Cavaliers: Sexton appeared to injure his left arm after being knocked to the floor in a collision with Holiday in the second quarter, but stayed in the game. ... C Ante Zizic (sore right knee) and G David Nwaba (sprained left ankle) are also out with injuries.

Sexton, Thompson, Cedi Osman and Alec Burks were all benched during New Orleans’ big run to start the third. The four returned later in the quarter.

“If you lose by 40 two games in a row, you might as well make a change and switch things,” Thompson said. “It’s worth a shot.”

Randle barely fell short of a triple-double with eight assists. The Pelicans shot 58 percent while holding Cleveland to 36-of-88 shooting.

“This was really good for us, a win like this,” Randle said. “I like what we were doing on the defensive end.”