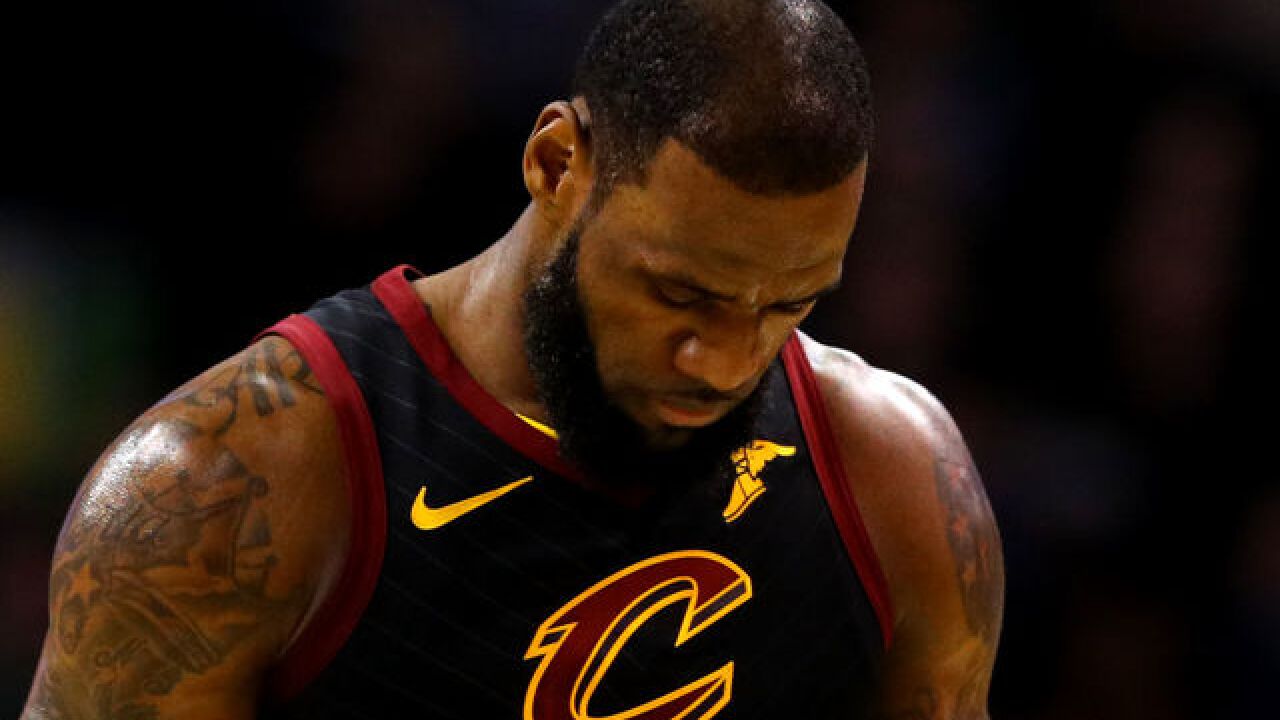 Copyright 2018 Scripps Media, Inc. All rights reserved. This material may not be published, broadcast, rewritten, or redistributed.
Maddie Meyer
BOSTON, MA - JANUARY 3: LeBron James #23 of the Cleveland Cavaliers looks on during the first quarter against the Boston Celtics at TD Garden on January 3, 2018 in Boston, Massachusetts. (Photo by Maddie Meyer/Getty Images)

As LeBron James and some teammates practiced free throws at a nearby basket, coach Tyronn Lue addressed questions about the troubling state of the Cavaliers while sitting in a high-backed, cushioned chair.

While he was cool, Lue's seat has warmed up.

With the Cavs mired in a bewildering midseason slump and less than 24 hours after a historically embarrassing loss to Oklahoma City, Lue said he has no immediate plans to change his starting lineup or rotations. Cleveland fans may be panicking, Lue's not nervous.

At least not publicly.

The Cavs are just 4-10 since Dec. 19, and in the past two weeks they've lost by 28 at Minnesota, 34 at Toronto and 24 to the Thunder, who scored 148 points and tied a record for the most points allowed by Cleveland in a regulation game -- a mark that went unmatched since 1972.

It's a mess, and it's a mystery the way James and the Cavs have collapsed. They've slipped in the past, but this slide feels much more ominous than in the previous three years when Cleveland stumbled but still reached the Finals.

"This is kind of just my experience with this team, to be honest," said forward Kyle Korver, acquired last January in a trade. "The year that I've been here, we've been really good and we've been really bad. It seems to come in waves, so, hopefully there's a good wave coming soon."

With all that's wrong, changes would seem to be in order. Lue, though, believes the Cavs can solve their problems without any major alterations.

Technically, Lue's right. The Cavs' roster hasn't been touched -- not yet.

However, the club has been in almost continuous flux over the past month as key players Isaiah Thomas and Tristan Thompson returned from injuries. Also, reserves Jose Calderon, Channing Frye and Cedi Osman have seen their playing time diminish and Korver, the sharpshooter who had developed into the team's best crunch-time player other than James, has had his role reduced.

Lue has been searching for the right combinations, but the Cavs aren't connecting.

"We're just figuring out our team," Korver said. "Ty's got a tough job. He's trying to find lineups that are working and he's trying to find minutes for everybody. I think he's doing a great job in that regard, as far as getting everybody in the game. Maybe not Channing, we'd like to get Channing out there a little more but it's a numbers thing right now.

"It's tough. There's a numbers thing right now. Definitely I've been a part of that, too. It's a long season. We're riding a bad wave right now, but hopefully we'll find some things that will start working again. Guys are getting healthier but we need to get back in sync. There's no answers right now."

A demanding schedule and injuries have prevented the Cavs from practicing much, but they held their third workout this week. It was needed.

Lue, though, decided not to show his players film of the debacle against Oklahoma City.

Lue can't be absolved from blame, but players aren't faulting him for the team's many issues, some of which could be addressed before the Feb. 8 trade deadline.

Following Saturday's head-scratching loss, James said he "would hope not" when asked if he thought Lue would be fired. Dwyane Wade dismissed any outside noise condemning the only Cleveland coach to win a championship since 1964.

Those endorsements should help Lue, but he knows better than anyone how quickly change can come.

Two years ago, Cavs owner Dan Gilbert fired David Blatt despite the team's 30-11 record and replaced him with Lue, who at the time was the NBA's highest-paid assistant. Cleveland doesn't have a comparable situation now, and while there are no signs pointing to Lue being in imminent danger, anything is possible until the Cavs start stringing together some wins.

Lue can only do so much, and following similar comments by Thomas and Wade on Saturday, Korver said it's imperative for Cleveland's players to hold each other more accountable.

"You've just got to look at yourself in the mirror and say `What can I do better?"' Korver said. "You can't point the finger. You can't get mad at a guy for not doing what you thought he should've done. You just can't point fingers.  It's really simple but it really is true. ... We're all grown-ups. When you're a mature grown up you just look yourself in the mirror."