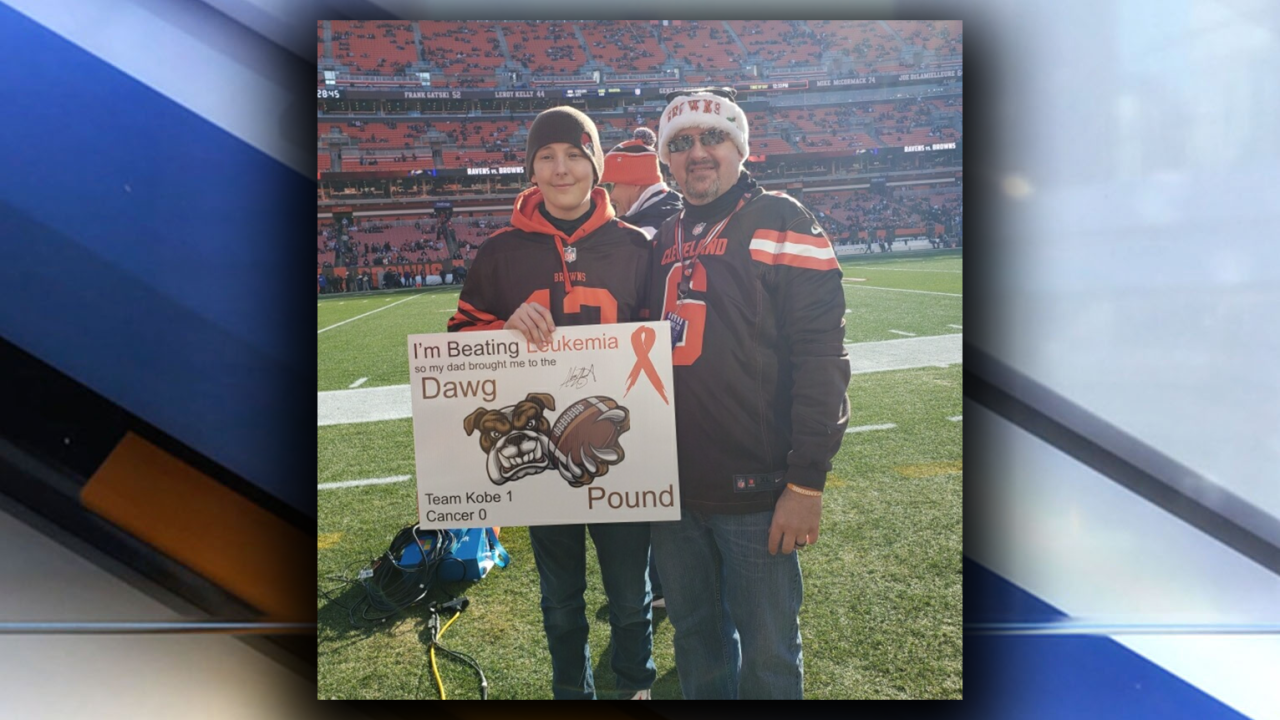 CLEVELAND — While the Cleveland Browns attempted to fight the odds in hopes to maintain a chance at the playoffs, a 17-year-old fan fought the odds stacked against him to watch them do it in person.

Kobe Griffith lives in Merritt Island, Florida. His dad, Terry Griffith, moved there for work in 2011 from Marion, Ohio. The two took with them a passion for the Browns.

In May, Terry surprised Kobe with the holy grail of gifts for any Browns fan—front row tickets in the Dawg Pound to Sunday’s game against the Ravens.

The two were just starting to get excited about heading up to Cleveland for the game when life threw a wrench in their plans.

On June 26, Kobe was diagnosed with leukemia. The doctors delivered the news to Kobe, and while his dad was shaken up hearing the news, Kobe had something else on his mind.

Terry told Kobe to take it day-by-day as Kobe began his battle with leukemia.

Terry said Kobe took about 10 minutes to process his diagnosis before he kicked into fight-mode.

“It was 10 minutes before he said ‘let’s go, let’s get to work.’ I’m a wreck and he’s asking the doctors questions and figuring out what he needs to do,” Terry said. "He's a fighter."

As Kobe started his treatments, he faced highs and lows but made sure to watch every Browns game, whether it was from home or from the hospital where he was being treated in Florida.

In remission and able to do more things, Terry asked Kobe’s doctors if the game was something they’d still be able to do. After evaluating Kobe, the doctors gave him the all-clear, deeming him healthy enough to make it to the game.

Kobe and his dad made the nearly 16-hour drive back to Ohio for their first Browns game in Cleveland since Kobe was nine. The two opted out of flying to protect Kobe’s immune system but were determined to make it to FirstEnergy Stadium.

Once at the game, Kobe and his dad made their way to their seats where Kobe was treated to an incredible surprise.

Alonzo Highsmith, Vice President of Player Personnel for the Browns, found Kobe in the front row of the Dawg Pound and presented him with a pass, taking him on the field before kickoff to meet Odell Beckham Jr., whose jersey Kobe decided to wear to the game.

Kobe was shown in the jumbotron several times throughout the game and many watching the game on TV likely saw the two getting rowdy in the Dawg Pound. Kobe even got to meet Browns' adorable mascot SJ.

While the Browns didn’t get the win Kobe and his dad were hoping for, they still left the game in high spirits.

“It would have been nice to see a win, but just being here with Kobe after this journey, that’s a victory in itself,” Terry said.

As Kobe and Terry head home to Florida, Kobe will take back the memories of Sunday’s experience with him as he continues his battle with leukemia.

“I still have three more years of treatment, a battle I’ll take one day at a time,” Kobe said.

Kobe said aside from his battle, he plans to finish high school and pursue a career in special effects as a horror makeup artist—and of course, he’ll continue to cheer on the Browns along the way.