Baker Mayfield fired back at Stephen A. Smith and Damien Woody after they called out the quarterback for taking shots at former Cleveland Browns head coach Hue Jackson.

Jackson was fired from the Browns last month and joined the Bengals two weeks later.

After Sunday's game against the Bengals, Jackson attempted to shake Mayfield's hand and give him a hug, but Mayfield seemed disinterested.

"I didn't feel like talking. I mean he left Cleveland and goes down to Cincinnati. It was just somebody in our locker room asking us to play for him and then goes to a different team that we play twice a year. Everybody can have their spin on it but that's how I feel," Mayfield said. "There's no hate but it's a rivalry and that's just how I'm gonna treat it. That's how our team should treat it too."

On Monday's First Take, Smith and Woody said Mayfield "mistreated Hue Jackson" and compared Jackson going to the Bengals to being the same as Mayfield leaving Texas Tech for Oklahoma University. 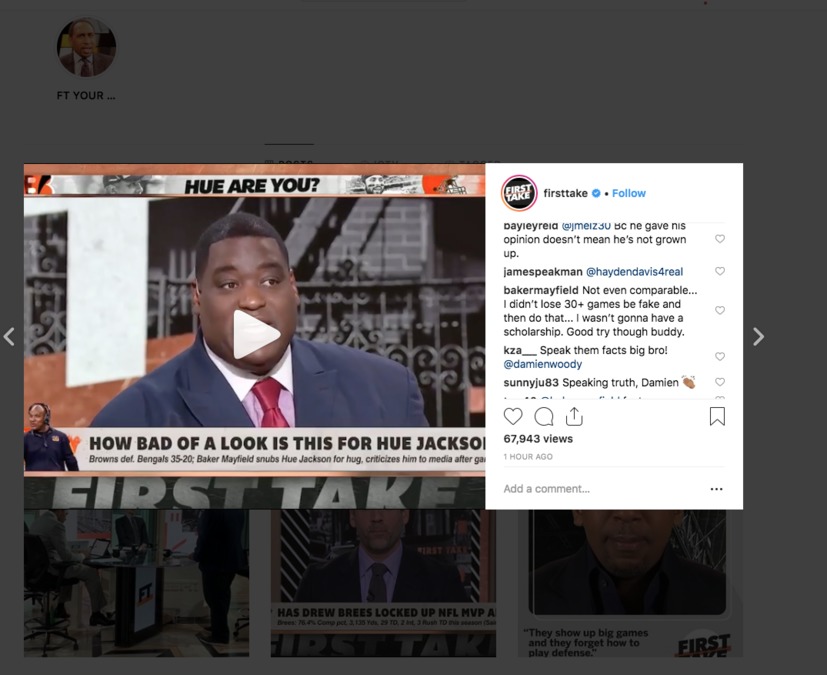 Mayfield saw the post and commented saying "Not even comparable...I didn't lose 30+ games be fake and then do that...I wasn't gonna have a scholarship. Good try though buddy."

The Browns will face the Bengals in Cleveland on Dec. 23.