Battle of the kicker: Why the fight for the roster spot is so important during Browns training camp 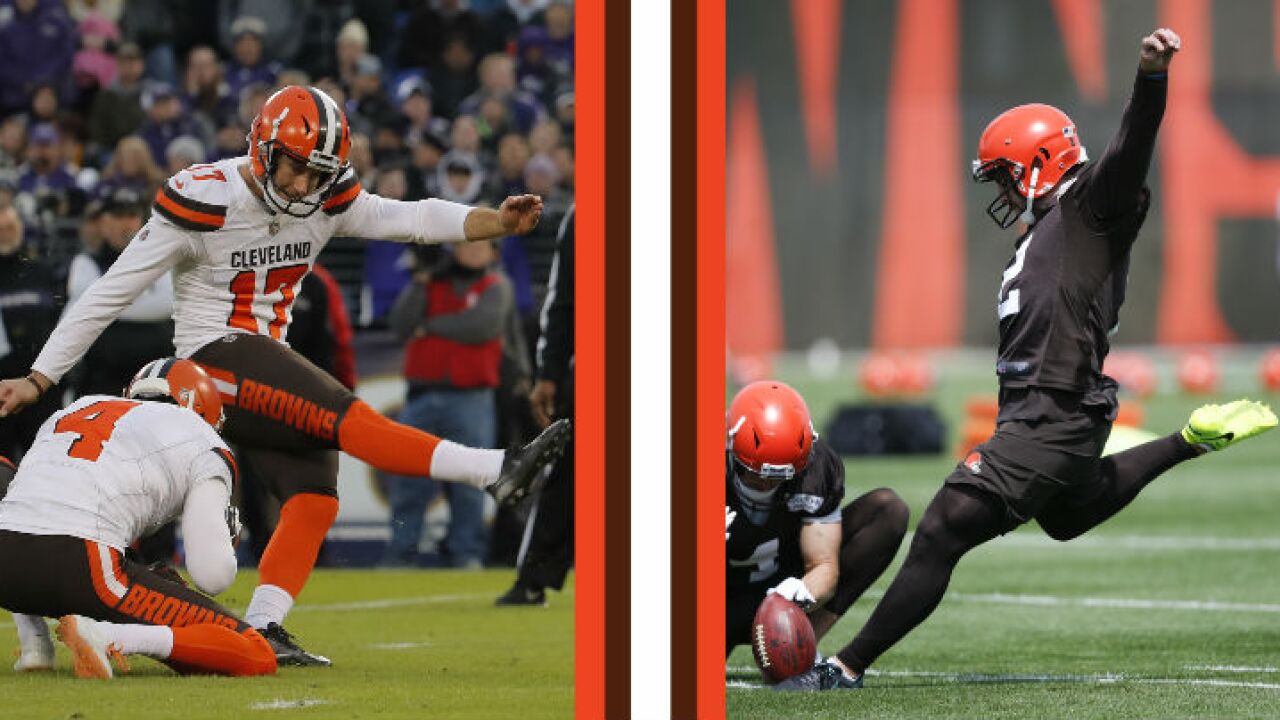 CLEVELAND — Phil Dawson recently signed a one-day contract with the Browns in order for him to retire with the team, which got many fans hoping the beloved kicker would return to the field. While that isn't bound to happen, and with two other kickers looking to find their spot on the roster, there's still plenty to hope for when it comes to the special teams position.

The kicker is a position not many fans talk about. Being a kicker isn’t as flashy as being a quarterback, wide receiver or running back. It's not an aggressive position like being on the offensive or defensive line. When it comes down to it though, it's equally important.

Last year, six of the 16 games the Browns played were decided by a field goal—made or missed.

The Browns home opener against the Steelers, the one that ended in a tie, could have been the Browns first win in over a year coming off their 0-16 season. Instead, former Browns kicker Zane Gonzalez's 43-yard field goal attempt was blocked in overtime, resulting in the tie.

The following week in their game against the Saints, the Browns lost by three points after Will Lutz made a 44-yard field goal with 21 seconds left. Gonzalez had a chance to tie but missed his second field goal attempt of the night, in addition to his two missed extra points.

Two weeks later, the Browns took on the Raiders in a highly controversial game. Following a game-tying 2-point conversion by the Raiders with 30 seconds left in regulation, Matt McCrane's 29-yard field goal in overtime gave Oakland a come-from-behind 45-42 win over the Browns. Following the game the NFL admitted that refs blew calls in the game.

After making a kicking change, letting Gonzalez go after the Week 2 loss, the Browns won their second game of the season thanks to a 37-yard field goal made in overtime by Gonzalez’s replacement Greg Joseph during their October game against the Ravens.

Two more games were decided by the kicker last season, both of which resulted in losses for the Browns. The first was a successful 59-yard field goal by the Buccaneers in overtime. The last was a missed field goal attempt in the first quarter of the Browns’ final game against the Ravens, which had it been made, would have given them a 1-point lead.

With a new season on the way that is full of high expectations, deciding who fills the kicker position might just be one of the most important decisions the Browns have on their hands.

With Joseph still on the roster and rookie Austin Seibert, who the Browns selected in the fifth round of the 2019 NFL Draft, a battle for the roster spot is underway at training camp.

During team periods at training camp, Joseph is 13 for 13 on his attempts while Seibert is 9 for 13.

Joseph and Seibert both struggled in their simulated critical game-winning attempts—both missing their marks.

The importance of the position is clear and a struggle from both options could be worrisome, but special teams coordinator Mike Priefer isn’t concerned yet.

“Am I concerned right now? No. I thought they both hit the ball better yesterday,” Priefer said. “Although they are young, I think they have done a pretty good job after misses coming back and making the next one for the most part since the spring.”

Both kickers are working to impress their coaches in order to make the final 53-man roster, but according to head coach Freddie Kitchens, the fight for that spot is still in full swing and he wants to see more from them.

Throughout the remainder of training camp, Joseph and Seibert have the daunting task of living up to the of the little-discussed position that is the kicker.

Let's hope one of them can do it—and do it well.