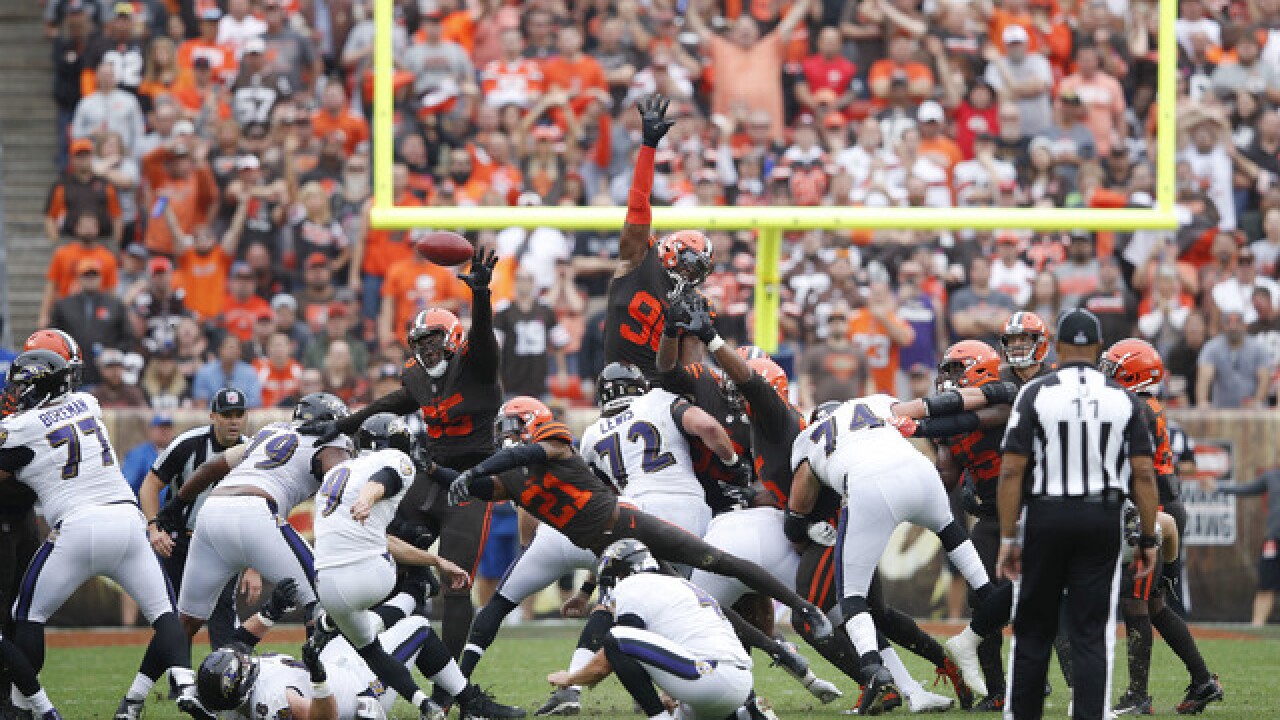 Copyright 2018 Scripps Media, Inc. All rights reserved. This material may not be published, broadcast, rewritten, or redistributed.
Joe Robbins
<p>CLEVELAND, OH - OCTOBER 07: Denzel Ward #21 of the Cleveland Browns blocks a field goal in the second quarter against the Baltimore Ravens at FirstEnergy Stadium on October 7, 2018 in Cleveland, Ohio. (Photo by Joe Robbins/Getty Images)</p>

The Browns are attempting to transform their organization into a winning franchise.

Free agency is an important piece of the puzzle, as it provides team opportunities to acquire proven talent. However, the past few years the Browns have had extra hurdles in the free agency race — many players preferring to go to teams with established cultures.  But with an influx of new young talent, a general manager that appears to be on the right track and a vacant head coach position, the Browns could have a more direct path to the free agency finish line.

“I think the tide is changing; the current is changing in favor of Cleveland. The Browns organization is becoming a more desirable place for free agents to land,” NFL agent Frank Salvano told News 5’s, Lauren Brill.

Salzano and his partner, Rocky Arceneaux, are co-managing partners of Alliance Management Group.  They represent several players including current Dallas Cowboy and former Ohio State star Ezekiel Elliot. If one of his players received an offer from the Browns, he’d advise them to consider it.

“My advice [to a client] would be to seriously consider the organization and not use its past ills and deficiencies or challenges, and look at it more with a clean slate,” Salzano said.

“If Cleveland offers a plan, I think John Dorsey and the new coach will be powerful salesmen in terms of sketching out a future for prospective free agents that is a tempting one,” Steinberg said.

There are several reasons these well-respected agents find Cleveland, a team that just one season ago didn’t win a single game, appealing. General Manager John Dorsey is now leading the show. Dorsey has a proven track record in the league, drafting players like running back Kareem Hunt and quarterback Patrick Mahomes, both for Kansas City. In his first year in Cleveland, his draft picks are major contributors and seemingly future stars with three of the Browns rookies, Baker Mayfield, Denzel Ward, and Nick Chubb, receiving the NFL Rookie of the Week honors multiple times this season.

“John Dorsey is showing the same skill with the Cleveland Browns that he did with the Kansas City Chiefs,” Steinberg said. “You couldn’t do any better than drafting Baker Mayfield at the most critical position which is quarterback. And he now looks like he will be a franchise quarterback.”

Mayfield alone is a draw to players deciding on a new home.  In nine games, Mayfield has thrown for 2,242 yards, 17 touchdowns and just seven interceptions. From week-to-week, he continues to show growth and reveal talent. He couples his ability with a swagger, humor, and confidence that makes him well-liked by both fans and players.

“He is a winner. He carries himself as a winner and more importantly, his on-the-field performance on almost every level that he’s played — he has succeeded and I think that is important for young players and free agents that are even veterans,” Salzano said.  “He is kind of brash and confident if you will. To me, that is symbolic of the direction the organization is headed in."

However, even with Mayfield and Dorsey, the Browns are a marathon away from being a team like the New England Patriots, where the playoffs are a given and anything short of a Super Bowl is a failure.  According to Salzano and Steinberg, that’s okay. The Browns appear to be on an upswing, which is an opportunity for players to be a part of a new wave of success in a community that’s unconditionally committed to their sports teams.

“You have to believe this season. They are 4-6-1 on the rise and winning seasons are going to be met with even more vigor. And I think it’s very appealing for any player to want to be part of something new,” Salzano said.  “I think for most athletes and folks that have a high level of craft, they rather make their own lane than travel down a beaten path and be part of something that is robotic or systematic as opposed to something new and fresh.”

“One of the opportunities with Cleveland is that this young team is going to create its own identity,” Steinberg said. “Players want to be somewhere where they have waited for some time and all the largess and excitement will be bestowed upon them.”

As agents, players and the Browns themselves look ahead to the future, the team seems to be gaining traction on their competitors, but who they hire as the next head coach is still a crucial piece of the equation.

“It will be a huge hire,” Steinberg said. “There are coaches and front offices that win in football even though the league is designed for parity.”

The Browns will have the opportunity to acquire new players through both the draft, free agency and any trades they make. Some areas of need could potentially be at the wide receiver position as well as the offensive line and cap space won’t be a problem. While we don’t know who the Browns want, it appears whoever it may be, they now have a solid chance to get them.

“They are starting to create a winning culture there and I think that is what free agents look for today more than anything else,” Salzano said. “When you can build your team around someone like a Baker Mayfield with a lot of other supporting talent and a good front office, and we will see what the coaching decision becomes, the sky is the limit.”