Browns GM Dorsey is ready for a successful season 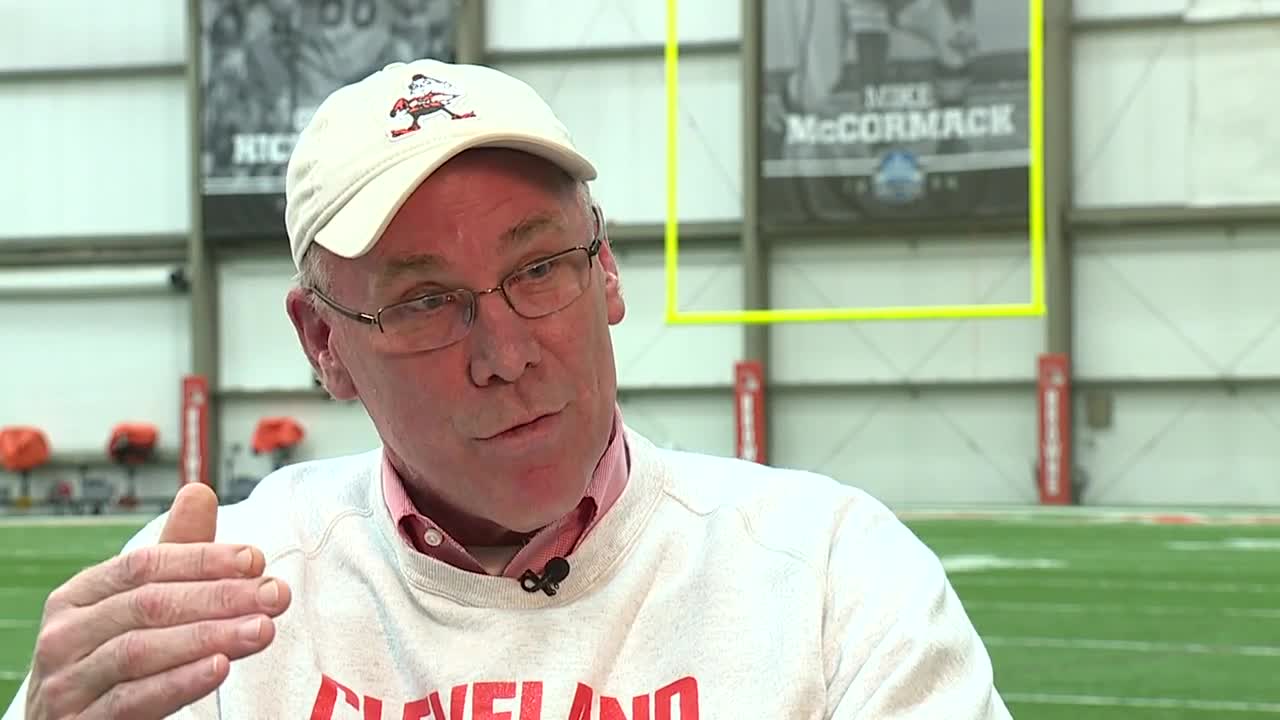 Lauren Brill sat down with John Dorsey to talk about the NFL Draft, the upcoming season and more.

BEREA, Ohio — Only two days removed from the 2019 NFL draft, Browns' general manager John Dorsey showed no signs of stress, exhaustion or even relief when he sat down to talk to News 5 about the state of the team. Dressed in his typical Browns sweatshirt, shorts and sneakers, Dorsey spoke in a chipper tone as he smiled while greeting me hello. His calmness in the wake of a GM’s busiest time of year may stem from the fact that this is a GM ready for a successful 2019 season.

“I would say 7-8-1 wasn’t a very successful season. We are third place in the AFC North. So I think what you have to do is you have unfinished business,” Dorsey said. “The mindset of this team is let’s go attack and be competitive in the AFC North.”

But to be competitive in the league, you need the best players on your roster to rise to the occasion.

There is uncertainty at the left tackle position; Joe Thomas left a massive hole after he retired following the 2017 season. This year, Dorsey signed Greg Robinson to a one-year deal, and Desmond Harrison signed as an undrafted rookie last season. Dorsey has yet to call either a long-term solution at the position.

“They are both really quality football players,” Dorsey said. ‘That’s one of those situations where let’s see how things pan out here.”

In recent years, especially in 2018, kicking errors have plagued the organization. The teamed signed Greg Joseph in the middle of the season last year and he made 17-20 field goals for the Browns. Nonetheless, Dorsey and company chose to draft kicker Austin Seibert in the fifth round. Many experts don’t see value in drafting a kicker, as there are often capable kickers available as undrafted free agents. But given how unstable the Browns have been in that position in recent seasons, Dorsey thought it would behoove the team.

Cornerback Greedy Williams is the highest draft pick for the Browns this year after they chose him in the second round with the 46th overall pick. In his post-draft press conference, he expressed confidence in himself as well as the team, mentioning the Super Bowl on multiple occasions. But even for a player that Dorsey described as very talented, he made it clear that there are no guarantees for him.

“It is good to set your expectations high, but you have to come to work and earn it. Right now he has been training for the draft. He forgets that there are other guys in the Cleveland Browns organization that have been training to play the game of football in the fall,” Dorsey said. “We are excited to have him. I think he is immensely talented, but he still has a lot to learn.”

And for those not necessarily battling for their job, Dorsey expects players to raise the bar consistently. Browns quarterback Baker Mayfield will enter the 2019 season a starter and will have more weapons this year than last year. While he broke a rookie record for touchdown passes with 27, Dorsey expects the second-year phenom to elevate his game in year two.

“I have always, going in from your first year to your second year, you make exponential strides. If you had to put it in the measurement category I would say 20 percent,” Dorsey said. “Now you can really refine your skills and work at your craft.”

While the draft may be over, Dorsey’s efforts to create a winning roster does not stop.

“We always look,” Dorsey said. “It is time to turn our focus back on the pro side of things to begin to see what players what niches can fit our need base moving forward.”

While Dorsey’s ultimate goal is to assemble a team that competes within the AFC North, his approach to achieve that goal is to create competition within his own team.

“I only know of one way of how to do things,” Dorsey said. “We are building this thing together and we are going to do it in a very systematic way.”