Browns pleased with “engaged” Beckham so far in camp 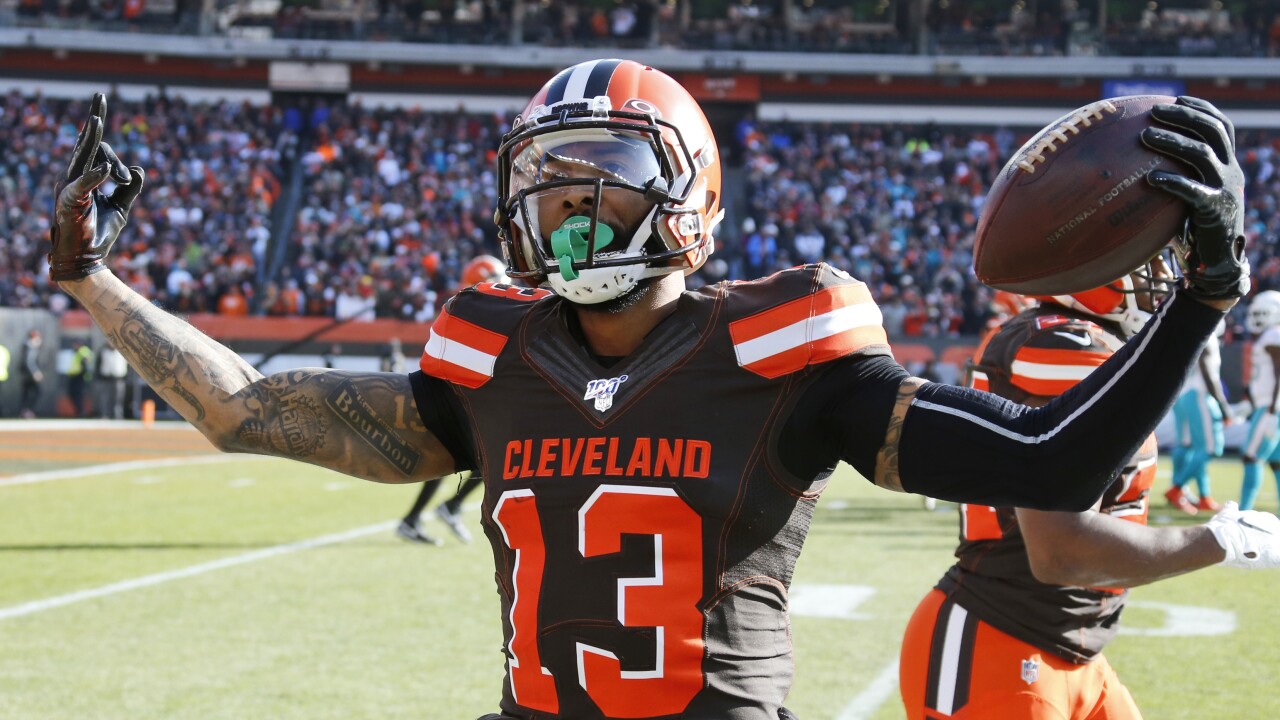 CLEVELAND — While there’s no guarantee Odell Beckham Jr. will stay quiet, the Cleveland Browns are confident their outspoken star receiver won’t be bolting from training camp.

Beckham had recently questioned the NFL’s decision to push forward and play the 2020 season despite the COVID-19 virus continuing to spread across the country.

But first-year Cleveland general manager Andrew Berry said Tuesday that Beckham, who came to the Browns in a blockbuster trade from the New York Giants last year, has been fully committed since reporting to the team’s facility last week.

“He’s returned and really been focused on working hard,” Berry said on a Zoom call with reporters. “He’s been very engaged in everything that we’ve done in the classroom and he’s really focused on having a great year.”

In an interview with the Wall Street Journal last month, Beckham expressed concerns about playing this season with the pandemic not subsiding. Beckham condemned owners for being greedy and said they don’t see the players “as human.”

“I just feel like the season shouldn’t happen,” Beckham said, “and I’m prepared for it to not happen and I wouldn’t mind not having it.”

Beckham’s interview took place before the league and NFL Players Association agreed on safety protocols so teams could open their facilities. Beckham reported on time, tested negative three times in four days for the coronavirus, and has participated in all the Browns’ team activities.

Berry understands that anything the three-time Pro Bowler says gets magnified. He said Beckham needs to know that, too.

“Having a player of Odell’s stature on the roster obviously generates a lot of attention,” said Berry, who returned to the Browns’ front office after one season in Philadelphia. “And Odell’s very mindful that he has to be conscientious with his words. With that being said, we’ve had plenty of dialogue and conversation with Odell, not only just through the summer but certainly as he’s returned to Cleveland.

Beckham was slowed by a core muscle injury all last season that limited his explosiveness. He only took a few snaps at full speed in practices leading up to games. He underwent surgery in January to repair the injury he sustained in training camp — after he had skipped the team’s voluntary workouts.

Beckham finished with 74 receptions for 1,035 receiving yards and four touchdowns, his fewest in the six seasons in which he has played at least 11 games.

Berry’s media availability came shortly after the team announced that defensive tackle Andrew Billings is opting out of the season due to the coronavirus. Berry didn’t provide any specifics on Billings’ decision, but stressed the team stands by any player choosing not to play.

Billings, who signed as a free agent in March to bring some bulk to Cleveland’s interior, is the third Browns player to opt out.

“For all those guys, it is deeply personal and an individual choice,” Berry said. “We understand that it is a difficult decision, and again, it is very, very personal. We support the three guys who have opted out so far, and I look forward to them being back with the team next year.”

NOTES: Berry acknowledged being “a little bit” surprised by TE David Njoku’s trade demand. The 2017 first-round draft pick has since rescinded the request and Berry said he believes Njoku “can have a fantastic year.” ... Berry has been impressed by QB Baker Mayfield, who reported to camp ”in terrific shape.” Berry said Mayfield cut body fat and has “done a really nice job of what I would call almost creating community and really bringing guys together, as difficult as that can be as everybody has really been trying to function virtually.” ... Berry had no hesitation signing DE Myles Garrett to a five-year, $125 million contract extension. Garrett was suspended for six games by the NFL last season for striking Steelers QB Mason Rudolph with a swung helmet, but Berry doesn’t think the incident is an accurate reflection on Garrett’s character.