Copyright 2018 Scripps Media, Inc. All rights reserved. This material may not be published, broadcast, rewritten, or redistributed.
Jason Miller
<p>CLEVELAND, OH - DECEMBER 17: Josh Gordon #12 of the Cleveland Browns warms up before the game against the Baltimore Ravens at FirstEnergy Stadium on December 17, 2017 in Cleveland, Ohio. (Photo by Jason Miller/Getty Images)</p>
By: Associated Press, Tom Withers
Posted at 7:37 PM, Sep 15, 2018

Josh Gordon’s troubled tenure with the Cleveland Browns has ended.

The team isn’t going to help him any longer. He let them down for the final time.

The Browns announced Saturday night that it intends to release the former Pro Bowl wide receiver, whose immense talent has been overshadowed by substance abuse that has derailed a promising career.

The stunning news came just hours after the Browns said Gordon would miss Sunday’s game in New Orleans with a mysterious hamstring injury. Gordon has been suspended by the NFL for most of the past four seasons because of multiple drug violations, and the Browns have been supportive of the 27-year-old for years as he tried to get his life together.

“This afternoon we informed Josh Gordon and his representatives that we are going to release him on Monday,” general manager John Dorsey said in a statement. “For the past six years, the Browns have fully supported and invested in Josh, both personally and professionally and wanted the best for him, but unfortunately we’ve reached a point where we feel it’s best to part ways and move forward. We wish Josh well.”

The team provided no specifics about what prompted their decision to part ways with Gordon. He reported to the team’s headquarters earlier in the day, and spokesman said Gordon was evaluated by doctors and the decision was made to keep him home because of the hamstring.

“This place will always feel like home to me,” Gordon said. “″I’m extremely honored and blessed to grow up and start a life amongst such a passionate and motivated group of individuals. It’s been a hell of a journey with you guys. I wish all of you nothing but the best.”

Gordon went on to thank the Browns “for having me. I’ll never forget me time here. Same book, next chapter.” 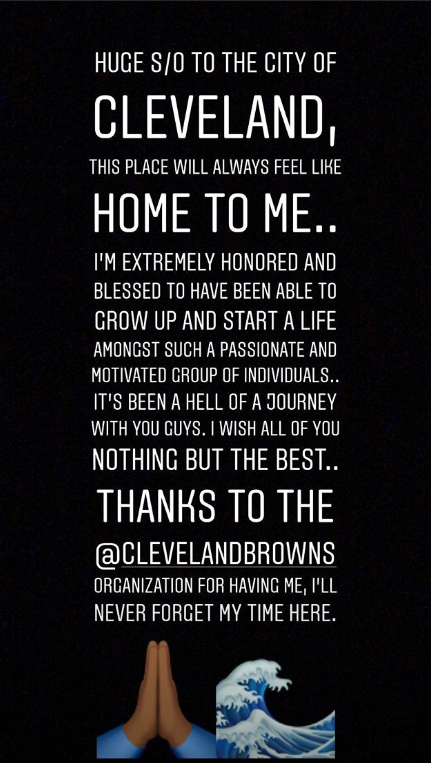 He ended the post with, “P.S. Anybody need a deep threat WR??”

It’s unclear what his imminent release means for Gordon’s playing future. Gordon was in the league’s substance-abuse program and if he failed another drug test, he could be facing more discipline.

It’s possible the Browns will try to trade Gordon before Monday so they can recoup something for a player whose has wasted his massive potential. If Cleveland releases Gordon, he’ll be a free agent and can sign anywhere.

Losing Gordon is a major blow to Cleveland’s offense. The Browns have receivers Jarvis Landry, rookie Antonio Callaway and Rashard Higgins, but none of them poses the same deep-field threat as the 6-foot-3, 225-pound Gordon who has breakaway speed.

The Browns have had negotiations with former Dallas star Dez Bryant, but the sides have not been able to work out a deal.

Gordon missed three weeks of training camp this summer to undergo counseling and treatment, and he recently said he was in a good place mentally and physically.

Gordon played in last week’s season opener against Pittsburgh, his first appearance in a Week 1 game since 2012, when he was a rookie.

On Wednesday, Gordon, who played 69 snaps last week, said he was glad to have the opener behind him and was looking forward to playing the Saints.

“Physically I felt great,” he said. “It was good to get that experience and that feeling underneath me, especially an overtime game, the weather and everything, the amount of snaps and reps, it’s good for my body to feel that. I feel great now. I felt great during the game, it was just good to see that my motor was at a decent point at that late in the game.”

Gordon was expected to have an expanded role this week against the Saints after being targeted just three times in a 21-21 tie against the Steelers. He caught a game-tying, 17-yard touchdown pass in the fourth quarter, but was mostly used as a decoy.

Gordon started the opener despite coach Hue Jackson saying he wouldn’t be on the field for the first snap as punishment for missing camp. Jackson blamed Gordon’s appearance on the first play a “mistake” and “miscommunication,” and Gordon said he was shocked to be on the field.

Jackson refused to elaborate on the situation this week, saying he and the coaching staff wanted to “move on.”

Gordon emerged as one of pro football’s most dynamic players in 2013, when he led the league with 1,646 yards receiving and scored nine touchdowns. However, he’s been in a downward spiral since and Gordon by Commissioner Roger Goodell for the entire 2015 and 2016 seasons.

He sat out the first 11 games last year before returning for Cleveland’s final five games, and caught 18 passes for 335 yards and one touchdown.

His teammates had been encouraged by Gordon’s commitment to staying clean and turning his life around. Other than his unexpected absence from training camp, Gordon had been a solid teammate and there was hope he had finally turned the corner after so many setbacks.

The Browns selected Gordon in the 2012 supplemental draft despite his background of drug use in college.