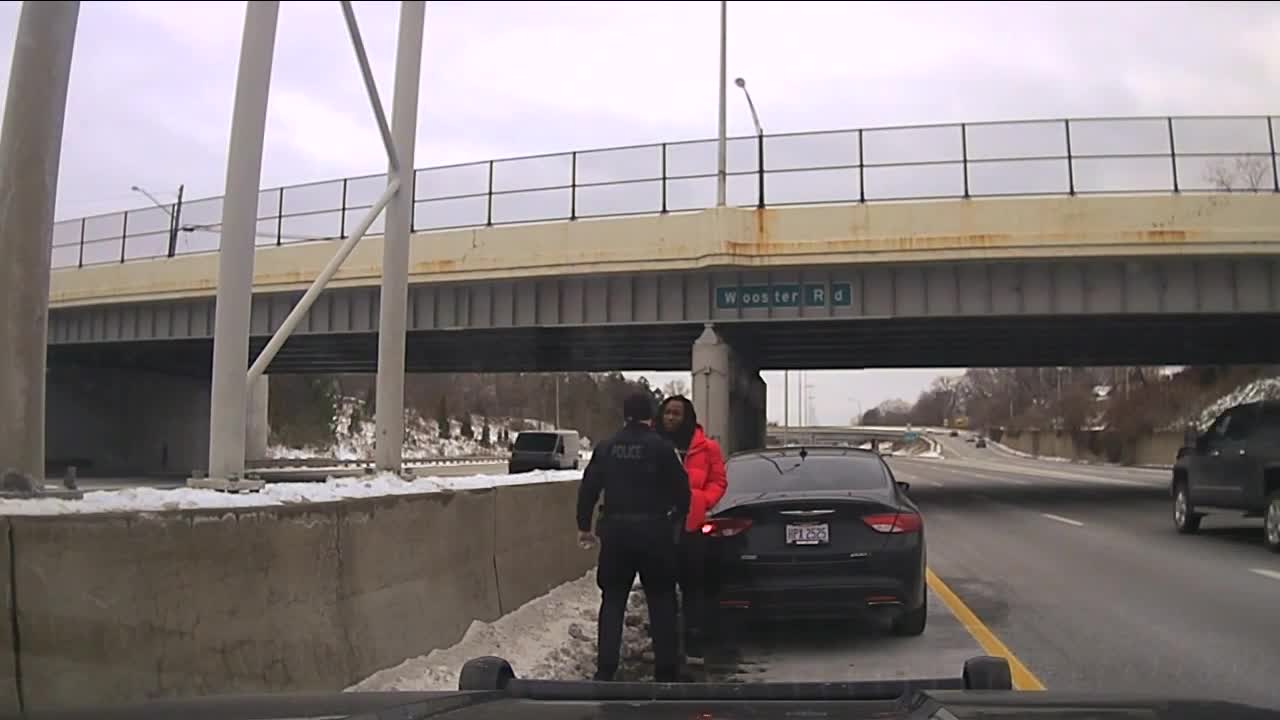 Browns running back Kareem Hunt was cited for driving 77 mph in a 60 mph zone, but dashcam released by the Rocky River Police Department unveiled more information from the traffic stop. 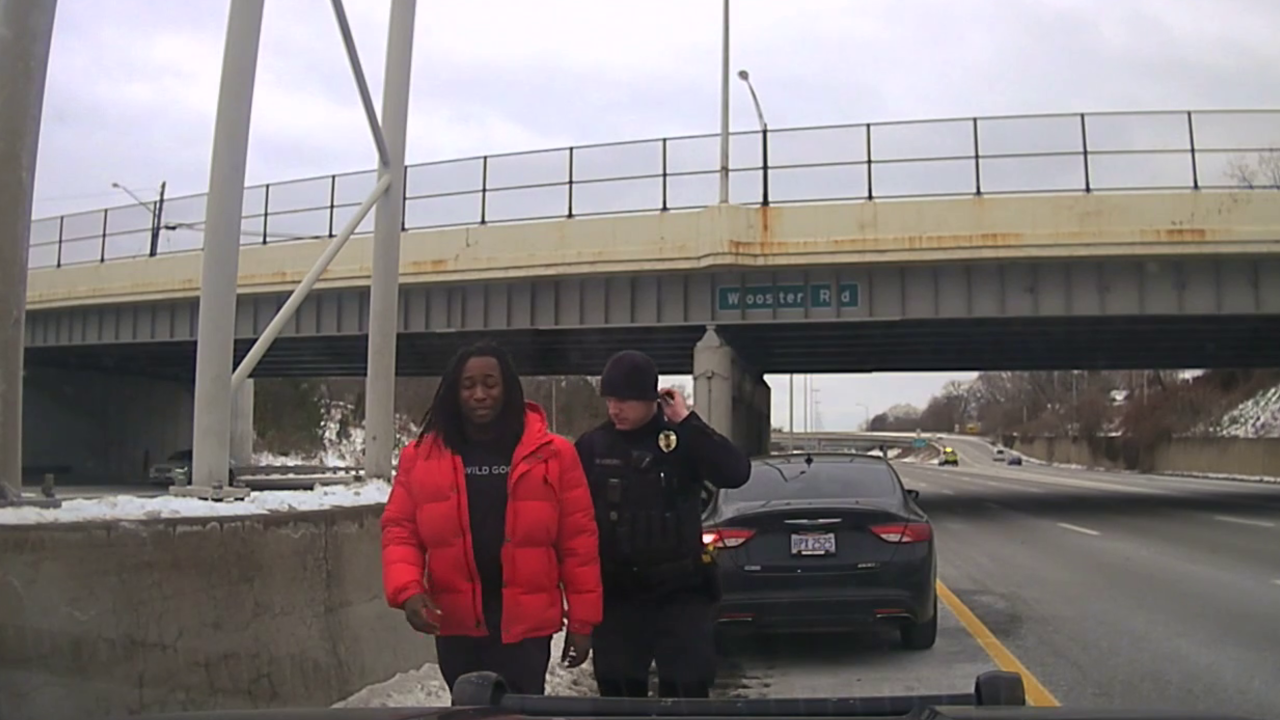 ROCKY RIVER, Ohio — Browns running back Kareem Hunt was pulled over for speeding last week in Rocky River. The officer smelled weed and a search was conducted during the stop where a small amount of weed was found in the vehicle. Hunt was cited for driving 77 mph in a 60 mph zone, but dash cam released by the Rocky River Police Department unveiled more information from the traffic stop: Hunt also had an open bottle of vodka, and the officer who pulled him over, who said he was a huge Browns fan, spoke candidly with Hunt.

During the stop, the officer said he smelled weed in Hunt's vehicle and felt that there was reason to believe the car needed to be searched.

The officer who pulled Hunt over told the running back that he was a huge Browns fan during the stop.

“I’m like one of the hugest Browns fans ever,” the officer said. “Born and raised in Cleveland Ohio and it’s frustrating to watch the Browns lose every single year.”

The officer then began lecturing Hunt on his life choices and how he’s wasting the second chance the Browns have given him after his past incidents.

“You got an awesome break to come back to the league and here you are pissing on it right now,” the officer said. "You’ve clearly been doing this [smoking weed] for a while, you’ve got bags and bags and bags of it. It’s not a lot because you smoked a lot of it.”

After letting Hunt know that he had found weed in the car, he informed him that he wouldn't be citing him for it, just the speeding violation.

“I hate to say this but you of anybody should know that if you’re trying to straighten the arrow, stay on the right path, this is not the way to go, young man,” the officer said. “You had a good second part of the year, you don’t want to screw that up over some weed and some stupid stuff. So here’s what I’m going to do, I’m going to write you a traffic ticket and I’ll just seize this stuff, fair enough?”

Hunt denied that the weed belonged to him but took the blame for possessing it at the time he was pulled over, apologizing to the officer.

The officer then asked Hunt to explain to him why he would risk messing up his second chance with the Browns.

“I just thought it would be a smooth, easy, quick drive and I wouldn’t have problems. I definitely won’t do it again because you’re right, you’re exactly right, that’s so stupid,” Hunt said.

The officer told Hunt that the reason he wasn’t citing him for the weed was due to a change in marijuana laws in Ohio, telling him he’d seize it and store it as evidence with the potential to test it to see if it was hemp or marijuana at a later date.

“Then it’s all over,” Hunt said after the officer told him they could charge him later if it tested positive for marijuana. Hunt told the officer that if the league were to give him a drug test, he would fail.

"It's the off-season. Sorry I was having a good time," Hunt said.

The league has been under scrutiny by many for being behind on the times. With weed fully legal in 11 states and only fully illegal in eight states, advocates have been pushing the NFL to change their marijuana policy.

Ohio is among 10 states to allow medical marijuana use, but it has not been fully decriminalized by the state yet.

Hunt reflected on his past, saying he should be playing in the Super Bowl with the Kansas City Chiefs, his former team, and that realization is something he’s been dealing with lately.

“It hurts my soul. I’ve been fighting a lot of s*** lately, it still hurts me to this day,” Hunt said. “I love Cleveland, love the Browns, but you don’t understand.”

During the stop, the officer also noted that he found an open bottle of vodka in Hunt’s backpack, but did not cite him for the open container. Hunt was not given a field sobriety test during the traffic stop. Hunt was issued a waivable ticket and sent on his way.

“I couldn’t even take you to jail if I wanted to,” the officer was heard saying during the stop.

Changes in Ohio laws have created challenges in prosecuting marijuana possession offenses. As a result, many municipalities are not citing for minor misdemeanor possession of marijuana. The suspected marijuana was seized as contraband and entered as seized property, which was appropriate and consistent with recent practice.

Field testing is done when there are indicators of impairment present, e.g., red or bloodshot eyes, slurred speech, confusion, odor of an alcoholic beverage on one’s breath. The officer on the stop did not report any indications of impairment at the time of the violation.

There is an impaired driving policy that indicates Rocky River Police officers will fairly but aggressively enforce impaired driving laws and specifies NHTSA Standardized Field Sobriety Tests are the tests we utilize, but does not specifically dictate when field sobriety testing is appropriate.

There is no policy to address citing for minor misdemeanor marijuana possession after the changes in Ohio law referenced earlier. However, our practice is to seize small amounts of suspected marijuana and enter it into evidence without citing until lab testing is available that allows us to appropriately test suspected marijuana and prosecute consistent with current Ohio law.

The Browns said earlier in the week that they were aware of the situation and were working to gather more information.