News 5 reporter Lauren Brill asks: Is it too soon to believe in Baker? 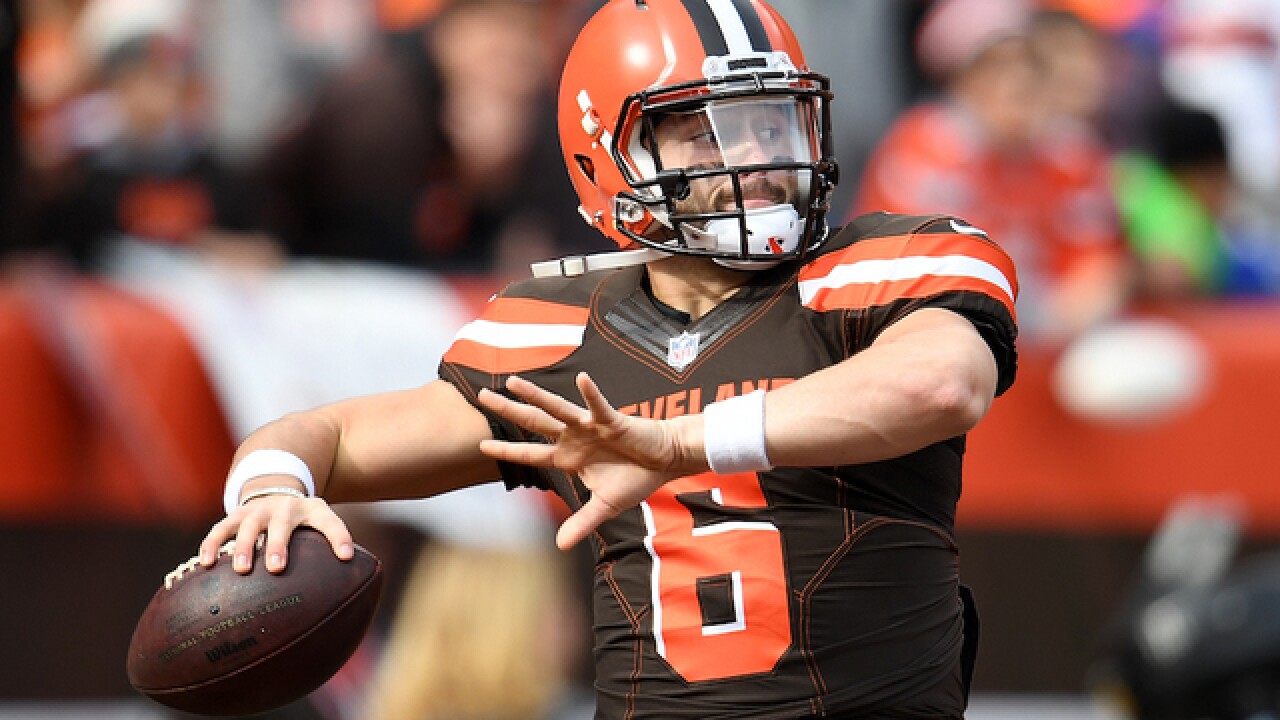 Copyright 2018 Scripps Media, Inc. All rights reserved. This material may not be published, broadcast, rewritten, or redistributed.
Jason Miller
<p>CLEVELAND, OH - NOVEMBER 04: Baker Mayfield #6 of the Cleveland Browns warms up prior to the game against the Kansas City Chiefs at FirstEnergy Stadium on November 4, 2018 in Cleveland, Ohio. (Photo by Jason Miller/Getty Images)</p>

The following is an editorial from News 5 sports reporter Lauren Brill.

On April 25, 2018, the day before the 2018 NFL Draft, neither the media nor the public had a clear sense of who the Browns would choose with the No. 1 overall pick. With several quarterback candidates in the mix, the Browns made a massive investment in Baker Mayfield, drafting him with the top pick. Now fans and Browns personnel alike have shown little hesitation in labeling him the future of this franchise, but is it too soon?

On the field, Mayfield is, in many ways, outperforming his fellow rookie quarterbacks . He received the Rookie of the Week honor twice. True, Mayfield has the lowest winning percentage among his peer quarterbacks Josh Rosen, Josh Allen and Sam Darnold, but he leads the rookie group in completion percentage (60 percent), touchdown-to-interception ratio (1.43), passing yards per game and game-winning drives (2).

Overall, Mayfield has thrown for 1,768 yards and 10 touchdowns in seven games. Despite his relatively diminutive stature, he’s shown athletically he can compete, he can make timely decisions, and he can step in when his number is called (i.e., the Browns game against the Jets). But he has yet to prove that he is on the level of a Tom Brady, Aaron Rodgers or even second-year star Patrick Mahomes, who in comparison has thrown for 2,901 yards and 29 touchdowns in nine games in his first season as a full-time starter.

Part of Mayfield’s appeal is his grit and mental toughness. He took an unlikely path from college walk-on to Heisman Trophy winner. It’s his ability to beat the odds and endure a tough road to success that made many think he is well equipped to withstand the endless adversity that comes with being a member of the Browns.

From a mental toughness standpoint, he appears to be confirming his supporters’ intuition. After former Browns head coach Hue Jackson received his pink slip, Mayfield called it his “Welcome to the business moment.” But he didn’t blink when he said it and seemingly went about his duties as a consummate professional.

However, the 23-year-old isn’t without emotion — far from it. In Week 7 against the Tampa Buccaneers, Mayfield got in the face of the Bucs' Jordan Whitehead after a hit to the head. Mayfield’s reaction was well-received by his teammates, who appreciated his fire. His consistent demeanor in the locker room coupled with his passion and energy on the field appear to be translating into respect from his teammates and even fans.

Even so, I am not sure yet either way on Mayfield. With only two wins on the season and a small sample size of his NFL abilities, I think many have added faith in the quarterback because of his draft status. By now Browns owner Jimmy Haslam, along with Browns fans, should know a high pick doesn’t mean a bright future. For evidence, the Browns don’t have to look far into their history. The long list of first-round disappointments includes: Johnny Manziel (QB 2014), Corey Coleman (WR 2016) and Justin Gilbert  (CB 2014). In fact, none of the first-round picks prior to the 2017 draft are currently on the Browns roster.

Mayfield has shown a glimmer of success, which many inside and outside of the organization have turned into the silver lining of hope. But only time will reveal if Mayfield can prove he has enough of a spark to add light to a franchise that's consistently been on the dark side of the NFL.