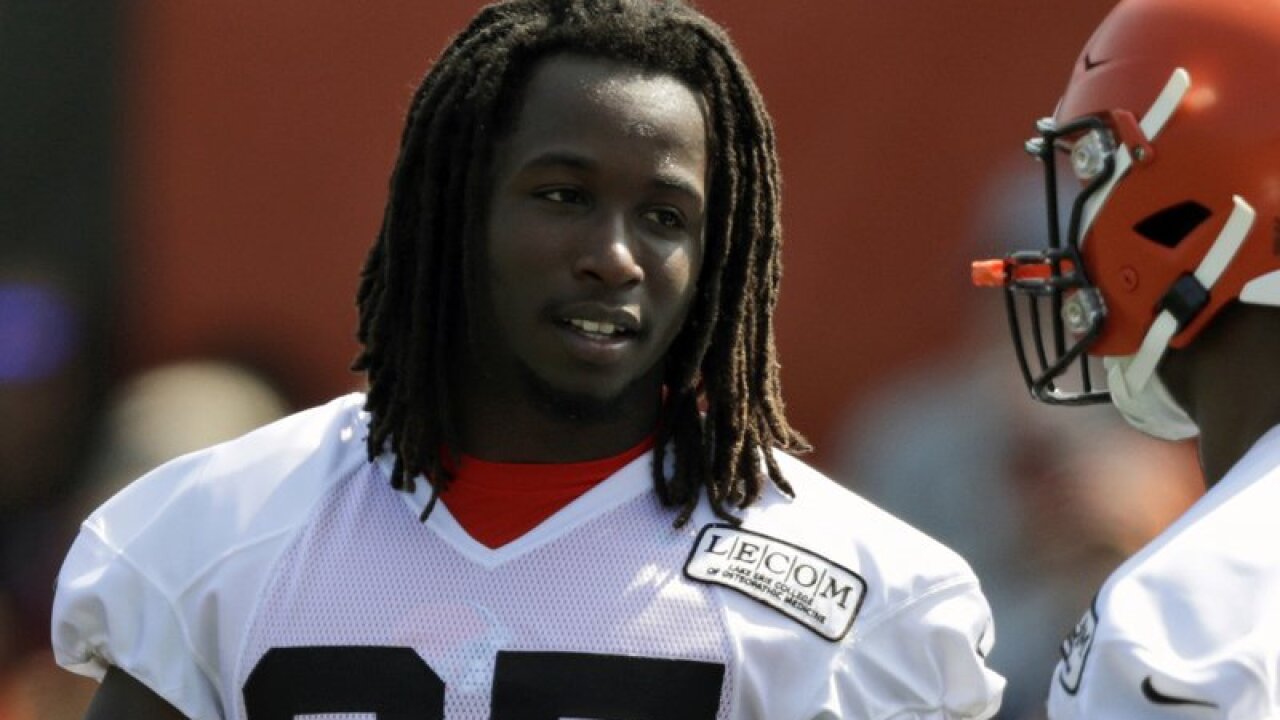 (Copyright 2020 The Associated Press. All rights reserved. This material may not be published, broadcast, rewritten or redistributed.)
Tony Dejak
FILE - In this July 25, 2019, file photo, Cleveland Browns running back Kareem Hunt, left, talks with running back Nick Chubb during practice at the NFL football team&#39;s training camp facility, in Berea, Ohio. Hunt’s self-inflicted punishment is over. The Browns running back, who quickly went from being one of the NFL’s rising stars to a violent offender, has returned from his eight-game NFL suspension and will play this week against the Buffalo Bills.

CLEVELAND — It's been 342 days since Kareem Hunt has played in the NFL, but that countdown will end on Sunday.

Hunt said he is ready and excited to get back on the field.

"A lot of mixed emotions, high and low. It is going to be a very fun, emotional game. I am definitely going to be excited to get out there and do whatever I can to play the role and help this team win," Hunt said.

Hunt was suspended for eight games by the NFL for violating the NFL Personal Conduct Policy in connection with physical altercations in Cleveland in February 2018 and at an Ohio resort in June 2018.

He played his last game for the Kansas City Chiefs on Nov. 18, 2018 against the Los Angeles Rams, before the team benched him and eventually released him after the allegations came to light.

Hunt said he was unsure he would ever get to play in the NFL again but was always hopeful that he would get a second chance.

“The first couple weeks, I was not sure, but after a while, I just prayed to God and put it in his hands and did everything I could. Stayed positive, made sure I stayed in the weight room and in the gym and just kept my goals ahead and looked forward," Hunt said.

Hunt is originally from Willoughby, so he getting his chance to return to the league with the support of his hometown means the world.

“I have a lot of family and support out here. There are a lot of great people in this building who do their best to help out. Anything I need, I can talk to them and trust those guys," Hunt said.

Hunt is not the only one excited about being able to get back on the gridiron.

“I just know he is ready. Watching him all week, it just looks good to be able to see him back on the field," wide receiver Odell Beckham Jr. said. "I tell you all of the time how much we sacrifice and put into this game, and I think you have a greater appreciation for it once it gets taken away from you. With him being out, I just know he is going to come back… First play when he gets the ball, I do not know if there are going to be many juke moves. Somebody better watch out for the stiff arm or the shoulder or something. He is excited. We are all excited to have him back."

“I think the excitement for him to get back out on the field is warranted," head coach Freddie Kitchens said. "He has gone through a lot since he has been out since his last game. As a person, he has grown. As a player, he has grown, especially in our system. I expect good things from him. Always when you play a game, you are always borderline trying to keep your emotions intact and make sure it is passion instead of emotion. That is what we are going to try to do."

With a team that already has offensive threats in Beckham, Jarvis Landry and Nick Chubb, Sunday's game against the Bills should be one to remember.