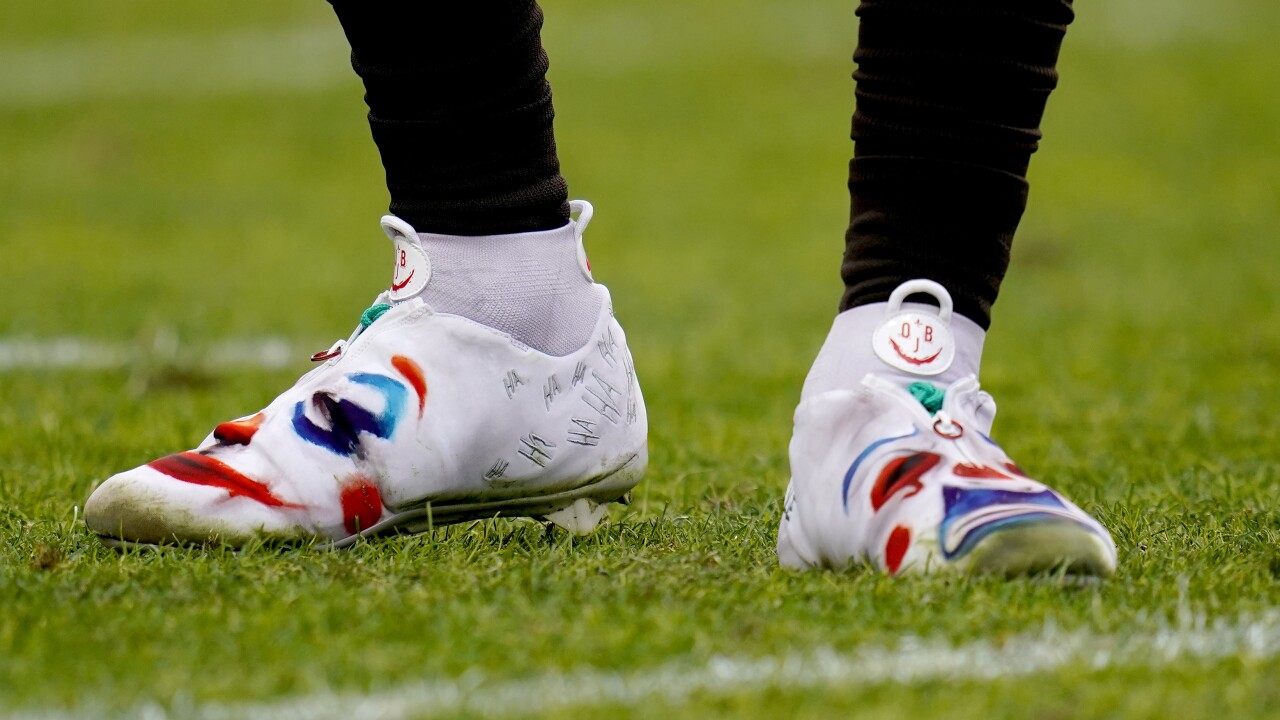 Jack Dempsey/AP
Cleveland Browns wide receiver Odell Beckham wears a pair of custom cleats during the first half of NFL football game against the Denver Broncos, Sunday, Nov. 3, 2019, in Denver. The NFL made both Beckham and Jarvis Landry change their cleats at halftime. (AP Photo/Jack Dempsey)

DENVER — In a whirlwind of drama surrounding the Browns during Sunday’s game against the Broncos, officials added to it when they pulled wide receivers Jarvis Landry and Odell Beckham Jr. to the side and ordered them both to change their cleats at halftime.

Now, it’s clearly not the most important issue the Browns are facing as they enter Week 10 with a 2-6 record and a whole lot to improve on, but it is something worth discussing.

Landry and Beckham both entered the game wearing custom cleats. Beckham’s cleats were inspired by the movie “Joker” while Landry wore gold cleats. (Yes, we totally get the irony of the clown shoes after that embarrassing loss.)

The two players were told that the cleats were outside of the Browns’ team colors and therefore in violation of the uniform code. Both were told they would need to change their cleats at halftime or they wouldn’t be allowed back in the game.

While no one is questioning the fact that the league has uniform standards they aim to uphold, it is strange that week in and week out Beckham is the poster child for uniform enforcement.

Vikings wide receiver Stefon Diggs wore custom Popeyes cleats during his game against the Chiefs Sunday afternoon, just a few hours before Beckham and Landry took the field in Denver, and was allowed to keep them on the entire game.

Minnesota’s color scheme includes purple, gold, and white—not orange. So why were his cleats acceptable?

The disparity in enforcing uniform standards have been seen all season with Beckham as the prime example.

Some of Beckham’s uniform violation enforcements are justifiable.

The visor that apparently violated uniform standards in the Week 2 matchup with the Jets could be explained. Yes, other players in the league are wearing dark visors, but they may have medical clearance while Beckham may not.

The ridiculously expensive watch he was fined for wearing, well that was a tad unnecessary.

In Cleveland’s game against Seattle, though, Beckham received a $14,037 fine for pants that were above his knees.

There are plenty of players who wear their pants above their knees and don’t receive fines and no one mentions it.

Josh Gordon Week 3. Pants above the knee all game long. Was not fined for his uniform.

It’s not strange that the NFL has uniform standards they aim to enforce, but you have to wonder why the enforcement isn’t equal across the league, player to player.

Fines will be announced later in the week, so Beckham and Landry will find out soon if they were just given a warning or if they will have to dig into their wallets over the incident.