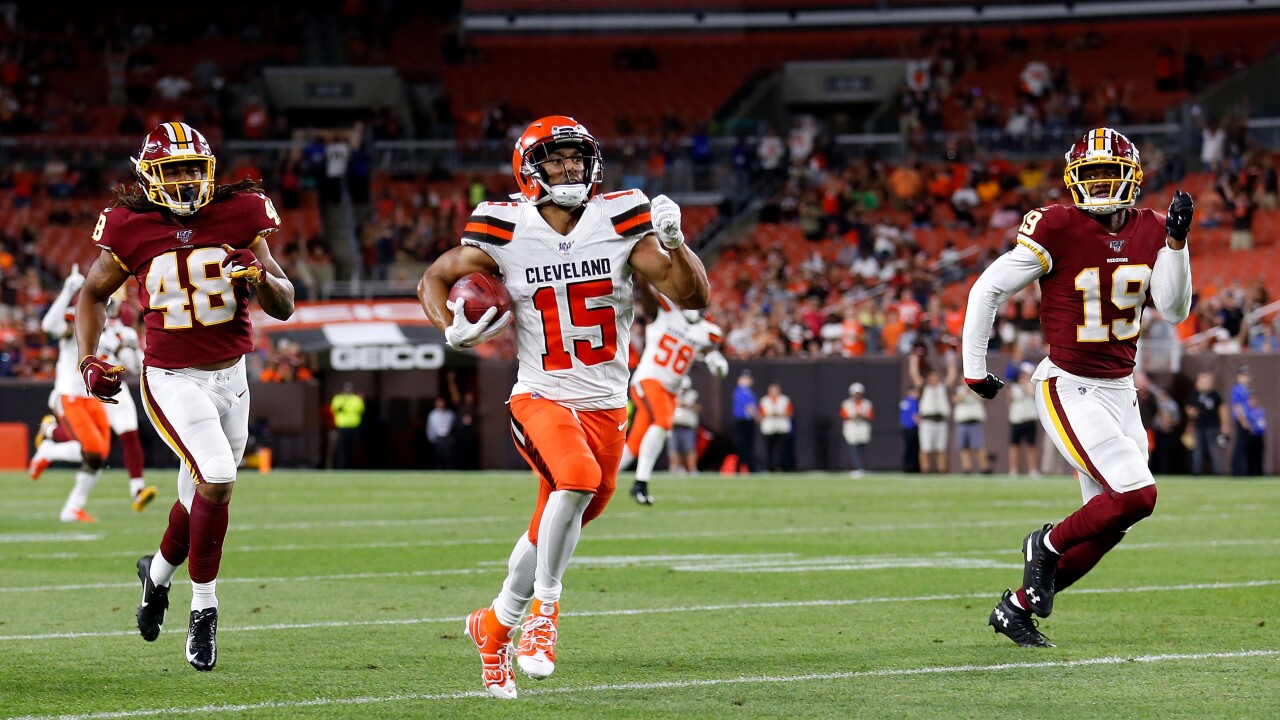 CLEVELAND — After Thursday’s pre-season game against the Redskins, the locker room erupted in cheers after coach Freddie Kitchens said one word: “Sheehy.”

HC Freddie Kitchens in the locker room following our win over the Redskins: pic.twitter.com/s0zfcXaBxE

The improbable, bench-clearing 86-yard punt return touchdown by wide receiver Damon Sheehy-Guiseppi late in the fourth quarter is probably the least-improbable chapter in the rookie’s incredible and inspirational NFL story.

Four months ago, Sheehy-Guiseppi arrived in Berea for his Browns tryout with two bags containing all his possessions, a few hundred dollars, the dream of donning a Browns uniform, and the drive to do so.

A week before that, Sheehy-Guiseppi was sleeping outside in the grass and on the beach in Miami, Florida, ClevelandBrowns.com staff writer Nick Shook recounts. He found out from a friend that Browns vice president of player personnel, Alonzo Highsmith, would be at a training event in North Miami. He researched Highsmith to know what he looked like and learned enough to convince the man in charge of admission at the event that he knew Highsmith. He did not know Highsmith.

Sheehy-Guiseppi got his name on the participant list and got the chance to run the 40-yard dash — 4.38 seconds later, he had Highsmith’s attention.

"He had an excellent workout,” Highsmith said. “Caught punts well, ran fast. I called (Browns assistant general manager) Eliot (Wolf) and I said 'hey, this kid Damon Sheehy, man he ran fast.' He goes 'really?' I said 'yeah, he caught the ball well, I'm thinking we should bring him up.' And then I was like, well, maybe we'll wait, but then I thought about it and Eliot goes 'well, let's just bring him in now.'"

Stuck in Miami without the cash to go back to his hometown of Lake Havasu City in Arizona, Sheehy-Guiseppi alternated between sleeping under the stars and at a nearby fitness center, charging his phone at a laundromat. His family and friends in Arizona remotely ordered him meals online.

One week later, he made it to Berea, and soon after, he had impressed the scouts enough to secure a contract.

"So far, he's done a phenomenal job,” Highsmith said back in April. “Smart, knows every position. It's interesting, it's going to be a fun story. The next four months, he's got a place to stay."

READ MORE: The improbable story of how little known WR Damon Sheehy-Guiseppi landed a tryout and, ultimately, a contract with the Browns (ClevelandBrowns.com)

Sheehy-Guiseppi’s path to the Browns was an unlikely one, and his place on the roster is certainly not a sure thing.

“I've been in this 22 years now, and that doesn't happen very often,” Highsmith said. “And the chances of him making the team are even slimmer. But if he does, it'll be one of the greatest stories of all time."

Four months later, Sheehy-Guiseppi sprinted down field, weaved past three defenders and into the end zone for his first NFL touchdown. His teammates mobbed him, and you could practically hear the orchestral soundtrack swelling.

Cleveland feels the love too, Damon.