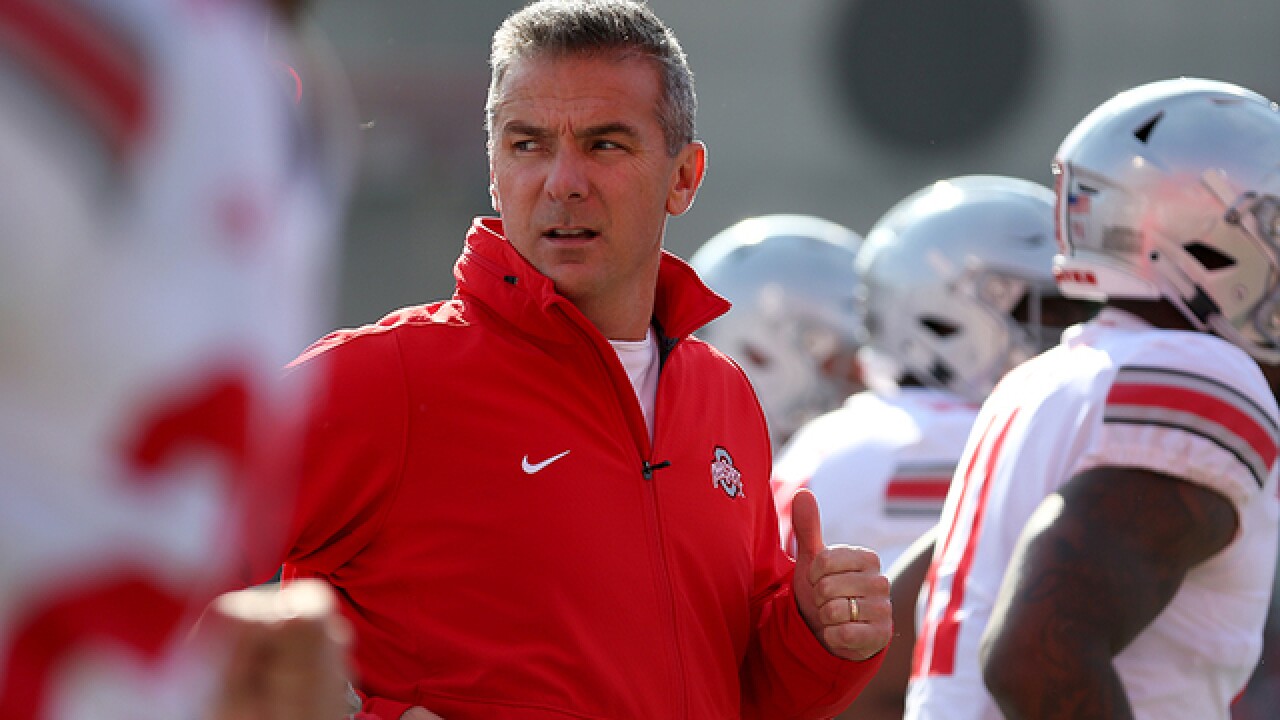 Image copyright 2018 Getty Images. All rights reserved. This material may not be published, broadcast, rewritten, or redistributed.
Will Newton/Getty Images
<p>Ohio State v Maryland<br /> COLLEGE PARK, MD - NOVEMBER 17: Head coach Urban Meyer of the Ohio State Buckeyes runs on to the field with his team before playing against the Maryland Terrapins at Capital One Field on November 17, 2018 in College Park, Maryland. (Photo by Will Newton/Getty Images)</p>

Relentlessly zipping up and down the field, ninth-ranked Ohio State and upstart Maryland were racking up yards and points at a dizzying pace.

Finally, the Terrapins were presented with the chance to end it — one way or another.

A gutsy decision by Maryland interim coach Matt Canada did not achieve the desired results, and the Buckeyes avoided one of the most stunning upsets in this college football season by squeezing out a 52-51 victory in overtime on Saturday.

After a 5-yard touchdown run by Dwayne Haskins gave the Buckeyes a seven-point lead to start overtime, Tayon Fleet-Davis scored for the Terrapins. Canada opted to keep his offense on the field to attempt a 2-point conversion, and Tyrrell Pigrome’s pass to Jeshaun Jones was off target.

“It was a gut call,” Canada said. “I felt like they were scoring, we were scoring. We had the ball, we had to make one play to win. Obviously, it didn’t work. I wasn’t trying to be aggressive. I was just trying to win.”

After watching his defense allow 535 yards and seven touchdowns, Ohio State coach Urban Meyer understood why Canada opted to win it right there.

“I would have probably done the same thing if I was their coach, the way they were gaining yards on us,” Meyer said. “I’m relieved we won.”

The victory kept the Buckeyes in the hunt for the Big Ten title and a spot in the College Football Playoff. Ohio State concludes the regular season next week in a game against Michigan that will decide the Big Ten East winner.

After describing the performance of his defense as “alarming,” Meyer said, “But we won. Let’s go back to work and get ready for next week.”

The Buckeyes never led until overtime against the gritty Terrapins (5-6, 3-5), who have made the most of a season dedicated to teammate Jordan McNair, who died of heatstroke in June. The players teamed together under the guidance of Canada, who maintained his role of offensive coordinator after taking over for head coach DJ Durkin, who was placed on administrative leave in August, reinstated on Oct. 30 and fired on Oct. 31.

On this day, the Terps traded blows with one of the best teams in the nation and stuck in it to the end.

“I wish we had been a little bit better on the last play,” Canada said. “It’s a tough day. We put a lot into this.”

Pigrome was making his first start of the season after Kasim Hill sustained a season-ending knee injury last week. He went 6 for 13 for 181 yards.

Haskins ran for three touchdowns and was 28 for 38 for 405 yards and three TDs. Ohio State finished with a whopping 688 yards, including 203 on the ground by J.K. Dobbins.

All that offense meant nothing until Pigrome’s pass went about six inches wide of his intended target.

“For us to stop them on a 2-point conversion, a whole bunch of emotions just came out of me,” Haskins said. “All that grit, all that adversity we faced in this game, to come back on top just meant everything for myself and my teammates.”

Maryland freshman Anthony McFarland had touchdown runs of 81 and 75 yards in the first quarter and finished with 298 yards rushing — seven short of the school’s single-game record.

The Terps took a 45-38 lead when Chigoziem Okonkwo recovered a fumble by McFarland in the end zone with 1:41 left. Haskins then orchestrated a 50-yard, beat-the-clock drive that ended with a 3-yard touchdown pass to Binjimen Victory with 40 seconds remaining.

Ohio State: It goes without saying that the Buckeyes must play much, much better next week to beat Michigan. The offense had no trouble moving the ball, but three turnovers proved costly. The defense, needless to say, was awful.

Maryland: Despite putting forth a great effort against a Top-10 team on Senior Day, the Terrapins still can’t seem to get the offense and defense working in sync. Last week, four turnovers were too much to overcome in a loss to Indiana. In this game, the defense couldn’t back a strong outing by a big-play offense.

The Terrapins had scored on all 25 trips to the red zone this season, and Maryland freshman Joseph Petrino was the only kicker in the nation without a miss on a field-goal try (10 for 10) before both streaks ended in the second quarter. After reaching the Ohio State 18, the Terrapins lost ground before Petrino misfired on a 49-yard attempt.

Ohio State: The stakes couldn’t be much bigger when the Buckeyes look to beat Michigan for a seventh straight time next week.

Maryland: With one last chance to become bowl eligible, the Terrapins travel to Penn State next Saturday.