TRUMBULL COUNTY, Ohio — The National Weather Service confirmed that an EF-1 tornado touched down in Northeast Ohio on Sunday, traveling for about 13 miles in Portage and Trumbull counties and causing damage to several buildings and trees. Later, the NWS confirmed a third tornado traveled for about six miles in Trumbull County. Another EF-1 tornado touched down in Cuyahoga County Sunday.

The NWS storm survey confirmed the tornado and damage began Sunday afternoon in Southington and tracked for about 13 miles to the southeast before lifting in Warren.

Several outbuildings were destroyed and extensive tree damage occurred, according to the NWS.

NWS later confirmed that an EF-1 tornado with maximum winds of 95 mph and a width of 250 yards touched down east of Vienna and north of State Route 82 in Trumbull County at about 4:44 p.m. Sunday. It tracked east across Brookfield, then lefted in West Hill, traveling just under six miles. 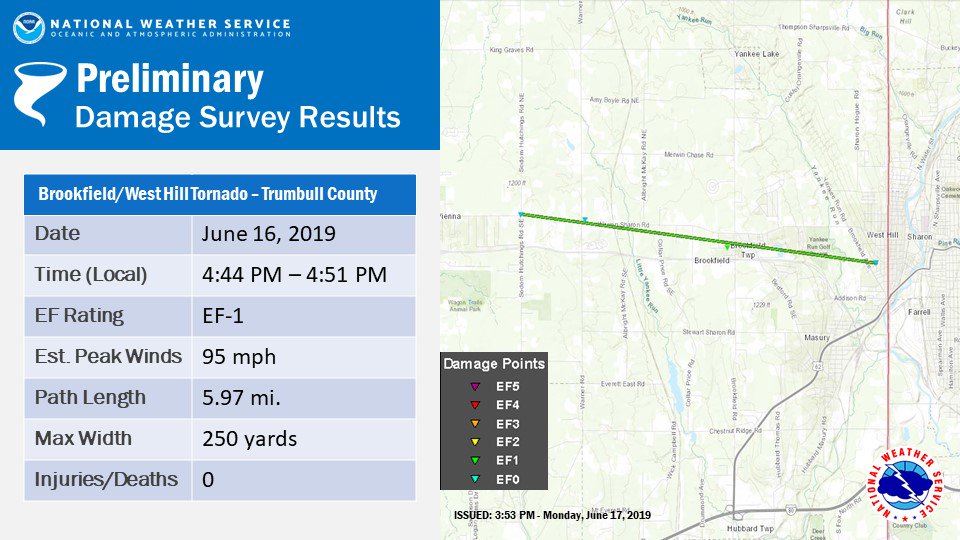 Another confirmed EF-1 tornado touched down in Cuyahoga County on Sunday afternoon. That tornado’s path was about two miles long, and it caused several trees to fall down.

EF-1 tornadoes are classified by the National Weather Service as having wind speeds of 85-110 mph.