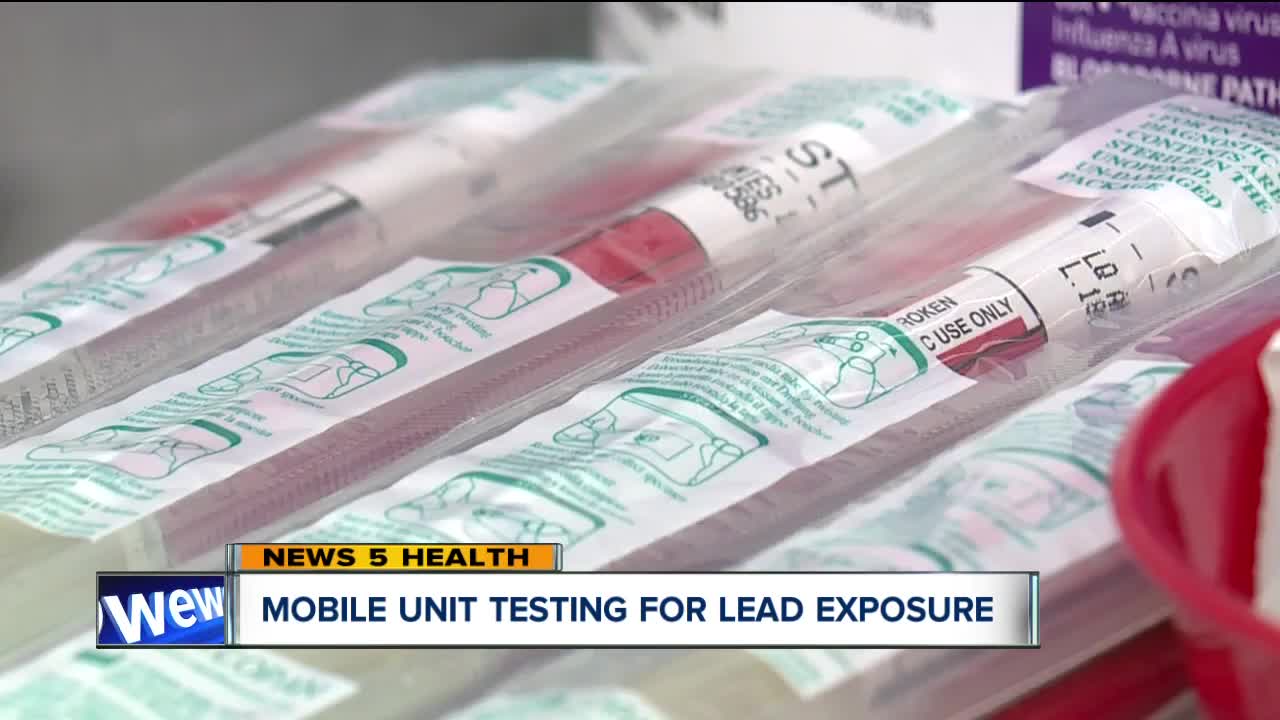 As a new study highlights just how prevalent and pervasive lead exposure is among Cleveland’s youth, Cleveland Clinic officials say it reinforces the need for one of their mobile programs. 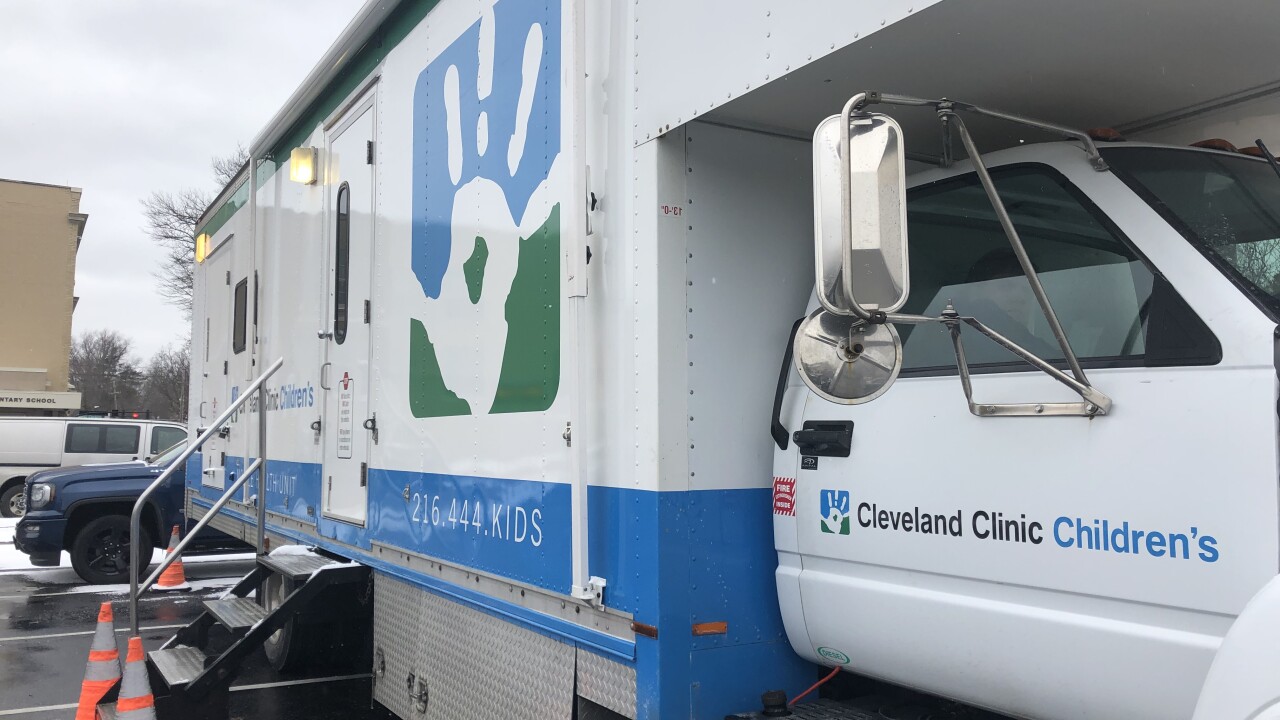 CLEVELAND — As a new study highlights just how prevalent and pervasive lead exposure is among Cleveland’s youth, Cleveland Clinic officials say it reinforces the need for one of their mobile programs.

Released on Monday, the two studies conducted by the Center on Urban Poverty and Community Development at Case Western Reserve University found, among other things, a quarter of kindergartners in the Cleveland Metropolitan School District begin their education with a history of elevated lead in their blood.

The studies also concluded there was a discernible disparity between lead exposure among children on the East and West sides. Kindergartners attending schools on the East Side are far more likely to have elevated levels of lead exposure, the study said.

The study also found that not enough children are being tested for lead exposure by their first and second birthdays, which is required for those on Medicaid.

“Any level of lead is unsafe for a child. The reason it is unsafe for a child is it can lead to issues with brain development,” said Laurie Money, a pediatric nurse practitioner at Cleveland Clinic. “The children are still developing. This is why it’s a bigger issue for children than it is for adults.”

With that in mind, the clinic’s school-based health mobile unit offers the family's children attending area schools a unique opportunity to have the hospital, in essence, come to them. Each day at a different school, the mobile health unit sets up shop to offer wellness checks, immunizations and other health-related services, including blood draws for the testing of lead exposure. After the blood draw, samples are sent back to the clinic’s laboratories to be tested. So far this year, Cleveland Clinic officials say more than three dozen kids have been tested.

“[Lead exposure] can have an impact on their learning, their motor skills, their speech, hearing and even their kidneys,” Money said. “Any of the effects on their brain, we cannot fix. That is why lead testing, early testing, is so important.”

The pair of studies from CWRU were led by Dr. Rob Fischer. While the rate of children with elevated blood lead levels has been on the decline, children in Cuyahoga County account for more than 40 percent of the children living in the state with elevated lead levels, Dr. Fischer said.

“If you look at the school level, some schools, their kindergarten cohorts have a third to nearly a half of their kindergartners have a lead history,” said Dr. Rob Fischer, an associate professor at Case Western Reserve University that led the six-month studies. “There’s a real disparity by neighborhood where you happen to grow up. It overlays heavily where our poverty is in the city and where our African American families are.”

Although there is no known safe level of lead in a child’s bloodstream, the Centers for Disease Control and Prevention has set a level of five micrograms per deciliter as a barometer to identify children with elevated levels. Children can be exposed primarily through lead-based paint that’s prevalent on much of the city’s aging housing stock. Exposure happens when the paint begins to peel, allowing it to be digested or inhaled. The federal government banned lead-based paint in 1978. Despite this, Money sees the impact of the heavy metal every day.

“I think any time you have a child that’s faced with any adversity, it’s hard, which is why we’re here and we do what we do so we can reach out to those families and help them,” Money said. “That’s why we have a program where we are reaching out to the head-starts in Cleveland to have a lead program, so we’re going out to the head-starts when the kids are 3-4 years old to get their lead checked. We can identify anyone with lead exposure early on.”

The study’s methodology comprised of more than 10,000 kindergartners that were entering CMSD over a three-year period. Enrollment records were matched to lead-testing data from the Ohio Department of Health.

The studies also highlighted an ocean-like disparity between students growing up in neighborhoods on the East and West sides. The neighborhoods with the highest proportions of kindergartners who have a history of elevated blood lead levels are Glenville (40.4 percent), St. Clair-Superior (36.2 percent), Buckeye-Woodhill (34 percent), Broadway-Slavic Village (34.6 percent). On the West Side, the Stockyards neighborhood, a proportion of 34 percent of resident kindergartners had elevated blood lead levels.

“This is not something that disappears with time. Once it leaves the blood stream the lead has moved to deep tissue and into bone. It has lasting effects,” Dr. Fischer said. “We have talked a lot about what happens later. How can we get kids through school and into college? But we are talking about the fundamental building blocks that kids are going to have to work with through that entire trajectory of their life.”

The other study found that students who are tested and found to have elevated blood lead levels are half as likely to be on par with their peers when it comes to kindergarten academic assessments. Unlike the lead crisis in Flint, Michigan, Cleveland’s lead crisis comes down to lead-based paint in the city’s aging housing stock. Because of this, remediating the city’s lead hazards would involve a multi-faceted approach involving public and philanthropic entities, alongside private property owners.

“Our big goal is to put the right kind of data in front of partners that have the juice and energy to carry out something that makes a big difference here,” Dr. Fischer said.