Wine in a can? These two Cleveland entrepreneurs say cheers to that

Copyright 2018 Scripps Media, Inc. All rights reserved. This material may not be published, broadcast, rewritten, or redistributed.
Kaylyn Hlavaty
By: Kaylyn Hlavaty
Posted at 3:01 PM, Feb 09, 2018

Inside the firehouse at the intersection of West 28th Street and Church Avenue, which dates back to the mid-1800s, it's a typical Friday afternoon for Fisk Biggar and Graham Veysey. Two adorable, people-pleasing dogs run through the open office space, distracting every worker that comes in contact with them. Cans of MANCAN wine sit on desks as a fun, laid-back vibe consumes their workplace.

If there ever was a quintessential business duo it would be Fisk and Graham — just two Clevelanders who love wine and their hometown.

Now, they're bringing a new kind of convenience to Northeast Ohio through their business set up in this old firehouse in Ohio City's "Hingetown" neighborhood.

In a city exploding with local craft beer options, they're slinging wine in the can. It's called MANCAN Wine, and what started out as an idea has flourished into a business.

It was the spring of 2014 when Graham was working on a building across the street—what is now Cleveland Tea Revival. After a long day, a drink was in order.

"I was sitting at a bar in Ohio City, and there were all these craft beers. What I really wanted was wine in a can. I googled to see if anything came up and nothing popped up. The only thing that did was pink champagne," he said.

Instead of letting go of what could have been a fleeting thought, Graham went home that night and bought MANCANwine.com—and a company was born. He consulted with Fisk—a childhood friend of nearly 25 years—who was living in Colorado at the time.

"I would fill my fridge with it in an instant," said Fisk, who got to work almost immediately. 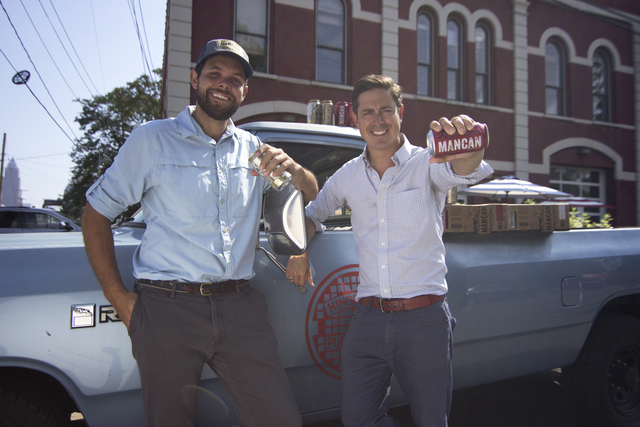 Fisk knew he wanted something easy to transport and drink, something crowd-pleasing.

"How do you take the chore out of drinking wine?" he asked. "You can drink it from the can, you don't need stemware, you're not fussing around with a bottle. If you drop it, it just dents and doesn't break."

The decision to work together was an easy decision for two guys who practically grew up together, once crowding onto a bus with other kids shipped off by their parents for a summer at Camp Roosevelt in Perry, Ohio.

With a name and a plan, Fisk and Graham headed out west to San Francisco because of its proximity to California's wine country to introduce MANCAN wine for the first time.

"At that time, very much different than now, everyone told us we were crazy for putting wine in a can. The reaction was certainly mixed, and we had to find people who got it," Fisk said. "We kept following those threads and got more and more and we probably built 70-80 accounts in San Francisco by doing it that way."

A wave of understanding of what wine in a could be reached distributors and brands across the region.

"We are really among the first set of people who created a marketplace where now nobody questions whether or not it's successful," he said.

Fast forward, and MANCAN is at Whole Foods in four states—Ohio, Minnesota, Colorado and Georgia—soon adding Virginia and Michigan. Not to mention it is working with local businesses such as Heinen's, Progressive Field and Nestle.

Graham and Fisk are examples of Clevelanders who haven't forgotten their roots.

They started a company in another state, always with a plan to bring in back to their hometown.

"I've been able to migrate back to Cleveland because of this," said Fisk, who was in Denver before MANCAN launched.

Fisk and Graham have their eyes set on reaching every single state and even beyond. They've exported to Norway and Sweden and are having talks with distributors in Brazil and several countries in Asia.

In just over two years, MANCAN Wine is currently in 11 states and will be in 16 states by April.

"The beauty of Cleveland is you can be based here but work in the world," Graham said.