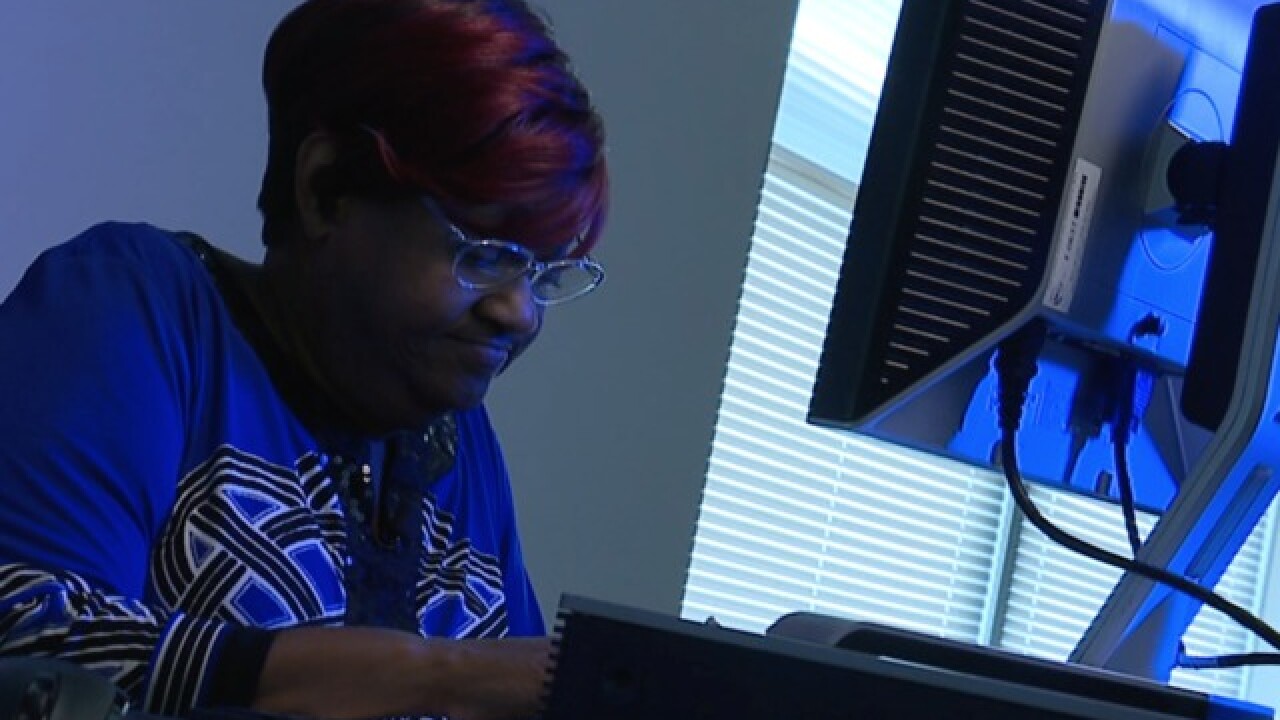 Copyright 2018 Scripps Media, Inc. All rights reserved. This material may not be published, broadcast, rewritten, or redistributed.
<p>Beverly Mcclintock learns how to use a PC for the first time in her lift. (Source: News 5)</p>

There is an incredible effort beginning in Cleveland to bridge what is called the “Digital Divide.”

Currently, data shows roughly half the city does not have reliable broadband or internet access. When 49 percent of people in your city can’t get online easily, it impacts their ability to apply for jobs, to pay their bills — it means children fall behind in school through no fault of their own.

The interactive map below from the National Digital Inclusion Alliance shows the percentage of households per tract with fixed Internet connections at 10 Mbps down or faster. View full-screen here.

“That saying, leave no child behind? Well, we want to leave no resident behind in this new digital economy,” said Leon Wilson, chief of digital innovation at the Cleveland Foundation.

Leon Wilson, chief of digital innovation at the Cleveland Foundation.

The Cleveland Foundation just announced $488,000 in grants that encourage digital inclusion — a multi-faceted initiative to get everyone connected, “until we get to a point that the internet access is treated more like a utility, no different than electricity. Until it’s in every home,” Wilson said.

The first part of the initiative is a partnership with the Cleveland Public Library and Cuyahoga County Library systems.

All you need is a library card. There will be no fee for the 4G service.

The second part of the initiative is the arrival of the nonprofit PCs for People. They are based out of Minnesota and have a second location in Denver. Cleveland will be the third city they open up shop.

PCs for People refurbishes computers donated by companies and offers them starting at no-cost to people who are 200 percent below the poverty line — think people on Medicaid or receiving government benefits. They also have desktops and laptops for sale, with a max price of $150.

RELATED: Find out if you're eligible for a low-cost PC on the PCs For People website here

Bryan Mauk is the executive director for the Cleveland branch. He said he is grateful for the opportunity to change people’s lives with this effort.

“It’s a really simple idea to a complex problem and that’s where it is exciting,” explained Mauk. “It is so scaleable that it can be replicated in every city across the country and that’s what we’re testing here in Cleveland.”

The Cleveland Foundation is also working with the Cuyahoga Metropolitan Housing Authority to increase internet access in public housing.

Beverly Mcclintock was one of the first people in Cleveland to receive a free computer — her very first.

The 60-year-old grandmother decided to go back to school two years ago, the first person in her family to ever attend college.

“Oh my goodness, was it scary? I thought I would be the only old person that was in my class, which in some classes I was, but I found out there are a lot of elder people that do go to school,” Mcclintock said.

Mcclintock is enrolled in classes at Cuyahoga Community College, studying to be a drug counselor. She is 10 years sober.

“I just wanted to give back what was given to me,” she explained.

For the last two years, she’s had to spend hours in public libraries and on campus trying to finish up her homework. When CMHA offered a 6-week intensive computer training class, Mcclintock jumped at the chance. She joined 17 other CMHA residents to learn all about computers and at the end of the course, they were given free computers from PCs for People.

For Mcclintock, her mouse and her keyboard have opened up an entirely new world.

“They got this Facebook that I’m new too, I have so many Facebook friends!” she said, laughing.

But mostly, Mcclintock uses her computer and internet access to complete homework — finally getting an A in her math class and on track to graduate in 2019.

PCs for People has a temporary location on 6005 Francis Ave. in Cleveland.

They will eventually move to their permanent location on E. 31st and St. Clair by early 2019. To purchase or obtain computers, residents should bring ID and proof of eligibility. You can click here for a list of documents that will be accepted. The store will also offer computer repairs.