More Ohioans are 'almost certain' to vote against Trump than for him in 2020, new poll shows 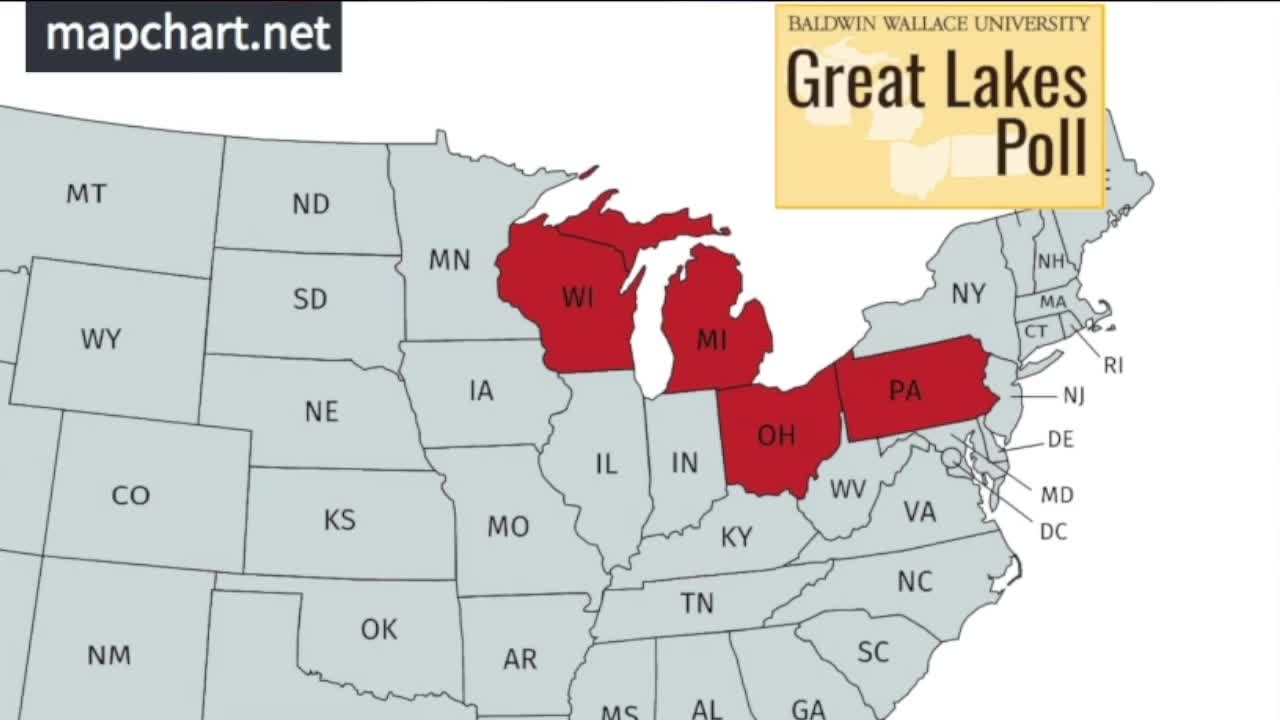 A new poll of four Midwest states — Ohio, Pennsylvania, Michigan and Wisconsin — that was conducted by Baldwin Wallace University this month includes some “eye-opening” results, including that support for President Trump in four states that helped elect him four years ago appears to be waning. 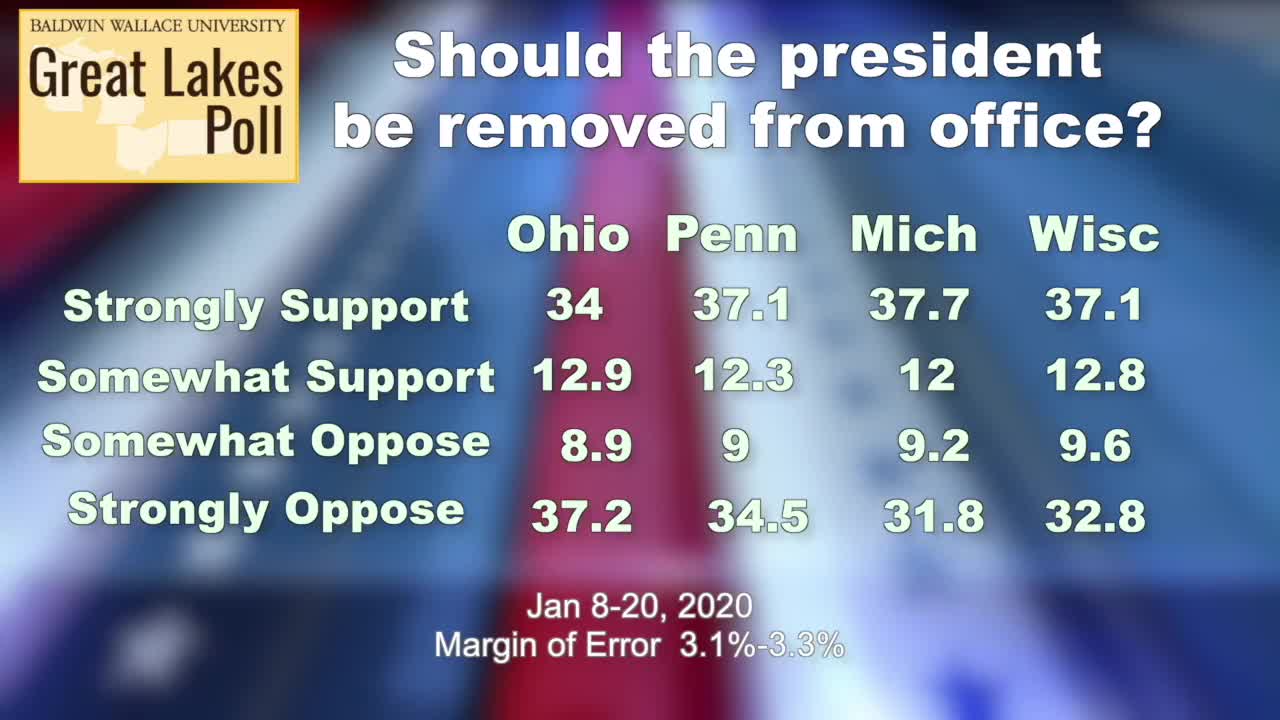 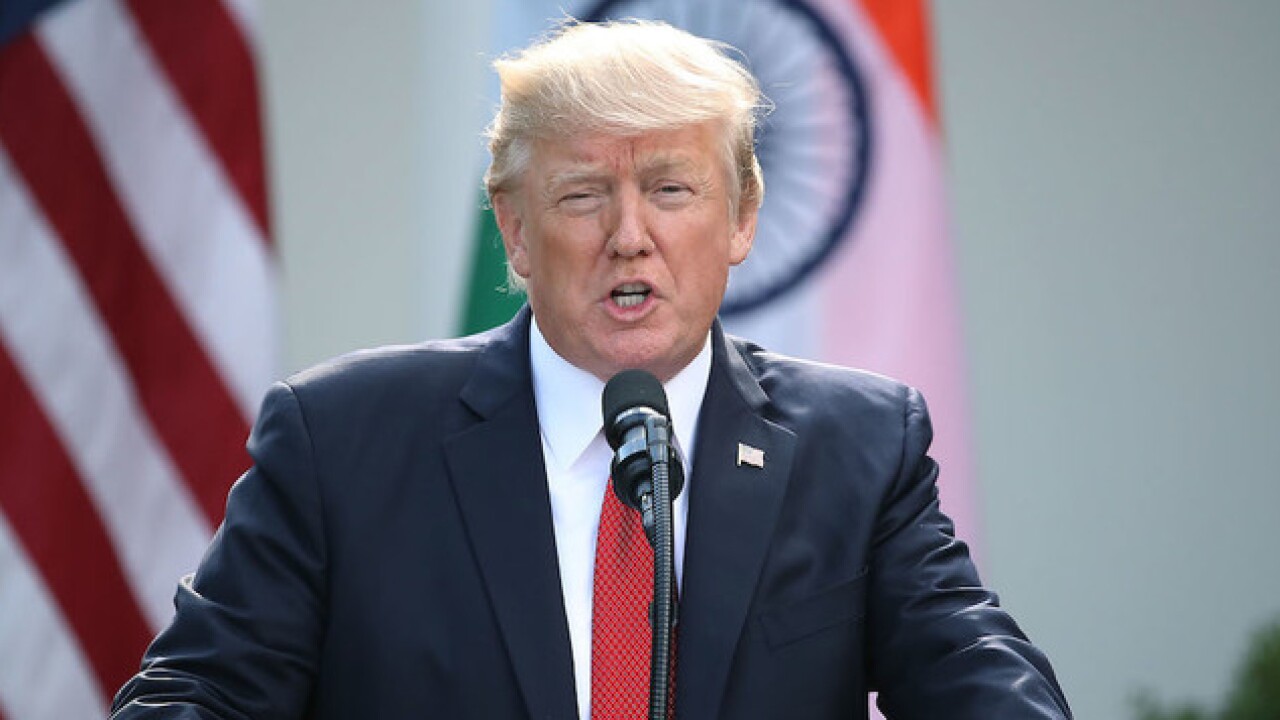 A new poll of four Midwest states — Ohio, Pennsylvania, Michigan and Wisconsin — that was conducted by Baldwin Wallace University this month includes some “eye-opening” results, including that support for President Trump in four states that helped elect him four years ago appears to be waning.

Ohio helped carry Donald Trump to the White House in 2016 by a margin of 8%, but four years later, polling from Baldwin Wallace indicates support for the president may be fading, with over 10% more Ohio voters saying they are certain to vote against Trump than for him in the 2020 election. The university’s Great Lakes Poll shows more voters in Ohio, Pennsylvania, Michigan and Wisconsin, all four of which voted for Trump in 2016, would vote for the Democratic Party’s candidate over Trump, no matter who it ends up being, though Ohio is in a statistical dead heat, given the 3.1% margin of error in the Ohio poll.

"A lot of people had written Ohio off based on the last election with the 8 point win that President Trump had, that's really not the case," said News 5 Political Analyst Dr. Tom Sutton of Baldwin Wallace University. "It's really interesting to see that President Trump does not have the support that he appeared to have when he was elected in 2016 in these four states."

If the election were held today, in Ohio, 44.3% of voters would vote for the Democratic candidate, 39.4% would vote for Trump, and 16.3% are undecided. However, 44.7% of Ohio voters said they “almost certain” to vote against Trump no matter who the Democrats nominate, over 10% more than the 34.6% who almost certainly would vote to re-elect the president. But, 12.9% said they may vote for or against Trump depending on which Democrat wins the primary.

Among undecided voters, 17.3% of Ohioans are leaning more towards the Democratic candidate, 11.9% are leaning towards President Trump, and 70.8% are unsure.

No matter the voters’ preference, polling suggests voter turnout in November will be high: 92.1% of those polled in Ohio are either very motivated or somewhat motivated to vote in the 2020 General Election. In 2016, 71.33% of Ohio voters turned out to vote, and the voter turnout for the 2018 midterm election was just 55.72% in the Buckeye state.

Biden ahead in Ohio, Bloomberg on the rise

Among Democrats or those leaning toward the Democratic Party, Joe Biden holds the lead in all four Great Lakes states polled by Baldwin Wallace, with Ohio showing the strongest support for the former vice president at 32.1% of those polled. Sen. Bernie Sanders is next, but over 10 points behind Biden with 20.8% of Ohio Democratic voters saying Sanders would be their first choice if the Primary were held today. Sen. Elizabeth Warren is third with 10.7% of Ohio Democrats indicating her as their first choice in the Primary, narrowly ahead of the 10.1% support for former New York mayor Michael Bloomberg, whose recent media blitz included $1.25 million in ad buys in Ohio.

"The surprise is the candidate in fourth place is not Pete Buttigieg or Amy Klobuchar, it is in fact Michael Bloomberg and we think that may have something to do with this massive ad campaign," Sutton said. "Spending $200 million plus across the country including a lot of ad buys in these four states."

Overall, Ohio Democrats are satisfied with their choice of Democratic candidates — 54.7% are very or somewhat satisfied, while 35.2% are somewhat or very unsatisfied.

“Once again, the Democratic Party is in a difficult position,” said Dr. Lauren Copeland with Baldwin Wallace University. “More progressive voters favor Bernie Sanders and Elizabeth Warren and dislike Joe Biden. More centrist voters favor Biden and dislike Sanders and Warren because they believe Biden is more likely to win over the independent voters. This schism could create an opportunity for Michael Bloomberg to thread the needle, and he has the money to do it.”

In thinking about their vote for president, economic issues were top of mind for more Ohio voters: 31.4% overall. The poll listed taxes, wages, jobs, unemployment and spending as examples economic issues.

Security issues, such as terrorism, foreign policy and border security, were second most important in Ohio, with 22.6% of those polled saying those were the top set of issues, barely edging out health care issues, which were the top issues for 22.5% of Ohioans polled.

Economic issues were more important to male respondents than female by a margin of over 10% in Ohio, and health care issues were the top issues for more women in Ohio than men by 4%.

Economic issues were also more important than other issues to voters in Pennsylvania and Michigan, but not Wisconsin, which ranked health care issues the highest.

“Voters give President Trump high marks for the economy, but disapprove of his handling of health care, the environment, immigration and foreign affairs,” said Copeland. “This suggests that if the economy falls out, Trump will face a tough bid for re-election. Of course, much hinges on which candidate wins the Democratic Party’s nomination.”

The Baldwin Wallace University Great Lakes Poll was conducted between Jan. 8 and Jan. 20 in partnership with Oakland University in Michigan and Ohio Northern University. It was conducted online among over 1,000 self-identified registered voters in each state. Results were weighted by gender, education, race/ethnicity and annual household income to be representative of each state’s population. The margin of error in Ohio and Michigan was plus or minus 3.1%, plus or minus 3.2% in Pennsylvania, and plus or minus 3.3% in Wisconsin.