Ohioan reports being recruited for plot targeting Gov. DeWine at his home 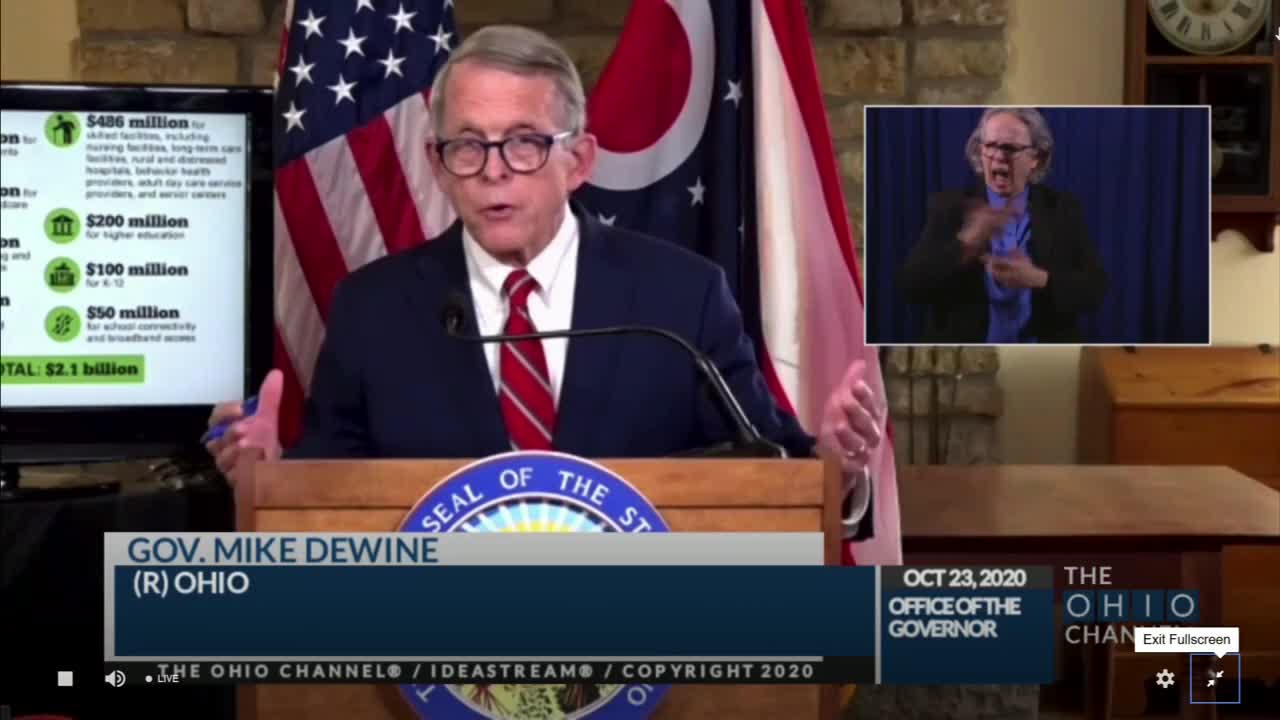 During a news conference about distribution of CARES Act funding, Ohio Governor Mike DeWine responds to a reporter's question about a report that an Ohioan was recruited for a plot to attempt a citizen's arrest on the governor at his home. 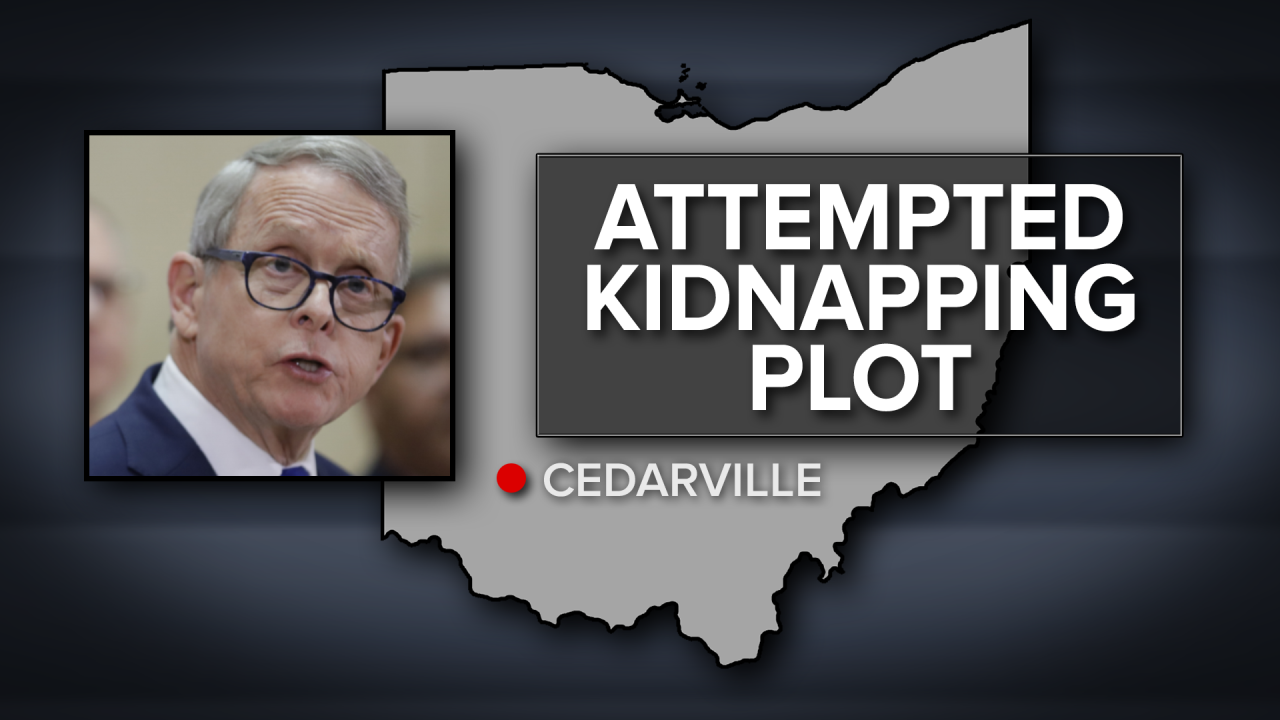 The following article was originally published in the Ohio Capital Journal and published on News5Cleveland.com under a content-sharing agreement.

COLUMBUS, Ohio — A Miami County resident reported to police being recruited to take part in a citizen’s arrest of Gov. Mike DeWine at his Cedarville home a week ago, but the plot evidently never materialized.

The Ohio State Highway Patrol, which handles security for the governor and his residences, was notified of the report by local law enforcement. The Patrol will not say if it launched an investigation or if any probe is ongoing, citing security concerns.

This report to police came just a week after 13 men were arrested for reportedly planning to kidnap Michigan Gov. Gretchen Whitmer and it follows months of protests against DeWine and state health officials.

According to a Piqua Police Department report from Oct. 16, a citizen told an officer about being called earlier that morning by an outspoken critic of DeWine. The caller reportedly asked if they wanted to take part in an attempt to arrest the governor at his home later that weekend and try him for allegations of tyranny.

The citizen identified the caller to law enforcement and in an interview Thursday with the Ohio Capital Journal. This outlet could not independently confirm a citizen’s arrest plot was in the works, nor would law enforcement say if the person has been under investigation or charged with a crime. The Capital Journal could not reach the person via social media or telephone, and is therefore not naming the alleged organizer.

Nor is the Capital Journal identifying the person who reported the incident to police after the person asked to remain anonymous for safety reasons, having already followed up with Piqua law enforcement about a threat made against them online.

The person who reported the call told this outlet the plot stemmed from anger toward the governor’s response to the COVID-19 pandemic. The person said they too are a critic of DeWine and claimed to have recently filed a citizen affidavit seeking criminal charges against the governor. State Rep. John Becker, R-Union Twp., who has led an impeachment effort against DeWine in the Statehouse, has urged Ohioans to submit such affidavits about the governor.

“Do I think (DeWine) needs to be arrested? Absolutely,” the person said. “But all that needs to happen within the confines of the law.”

They claimed they were initially excited when receiving the call last Friday, thinking the conversation would be about the ongoing search from DeWine critics to find a prosecutor willing to bring charges against him.

“(The caller) said ‘no, we the people, we’re going to arrest him,’” the source said.

According to this person, the caller described several supposed penalties for a citizen’s trial on tyranny — permanent exile or execution.

Soon after the call, they decided to contact the police.

“If I don’t do something about this and something happens, I’m either legally culpable or at least I’m going to feel bad,” they said. “Not that I have any love lost between me and Gov. Mike DeWine. Again, I think he needs to be in prison. But again, if (the caller) had done something … I would have felt ethically responsible, right?”

Piqua Police Chief Rick Byron told the Capital Journal the report was turned over to the Ohio State Highway Patrol.

“At this point, we have not followed up with them and have no plans to do so,” Byron said, noting the alleged caller is not from Piqua and therefore his department does not have jurisdiction. “We’re pretty confident that (the Patrol is) going to handle this situation.”

Dan Tierney, a spokesperson for the governor’s office, referred questions about the situation to the Patrol.

In a brief statement, Lt. Tiffany Meeks told the Capital Journal: “For security, the Patrol does not discuss threats or security operations involving the governor.”

After the report was made on Oct. 16, the governor hosted two press conferences at his Cedarville home on Oct. 20 and 22.

This is the latest in a series of alleged plots targeting political leaders in 2020 for their responses to the pandemic. In Michigan, state and federal law enforcement foiled a plot to kidnap and try Gov. Whitmer, with seven of the men being charged under the state’s anti-terrorism law.

Police in that case have alleged the Whitmer plot was hatched in a meeting held in Dublin, Ohio this summer. The same group of men also hoped to target Virginia Gov. Ralph Northam.

There is no known connection between these plots and the one reported in Piqua.

Repeated protests at the Statehouse led DeWine to move his press conferences from Capitol Square to a government building elsewhere due to “security reasons,” a local outlet reported.

That same month, a local outlet reported that Ohioans protesting the state’s public health orders were seen “driving by DeWine’s Greene County house, filming it and counting cars.” The outlet quoted a DeWine spokesperson as saying security officials were aware of this surveillance but could not comment further.

In May, protesters repeatedly targeted the home of Dr. Amy Acton, who was then serving as director of the Ohio Department of Health. There were reports that some of the protesters were armed with guns, and one person was photographed carrying an anti-Semitic sign. Not long after, Acton resigned as state health director.

The state has been without a permanent health director in the months since. A replacement was announced in September, but the person selected withdrew from consideration after learning of the harassment leveled against Acton. The Ohio Department of Health continues to be led by an interim director.

Also in May, Democratic House Minority Leader Emilia Sykes reported a phone call to police threatening to kill her father, state Sen. Vernon Sykes, if she did not “step aside” politically.