Through the pain of the last year, Michael Chapman's family and teammates say all of Cleveland has important lessons to learn from their loss.

Hugs once reserved for touchdown runs were given Sunday along Lake Erie while everyone thought about what could have been.

"He was a great athlete," said teammate Raequaen Davis.

"One of our best," reinforced Tyrese Benson.

Neicey Bryant was planning on seeing her son, Michael Chapman off to prom and graduation this past spring. Instead, July 23, 2018, marks one year since he died from gunshot wounds.

"Instead of me taking him to his dorm room and get him set up for college, I'm out here with balloons doing a release," said Bryant.

Bryant calls the last year the hardest of her life. She says there have been no tips in a killing that robbed Benson and Davis of more than just a stand out teammate. 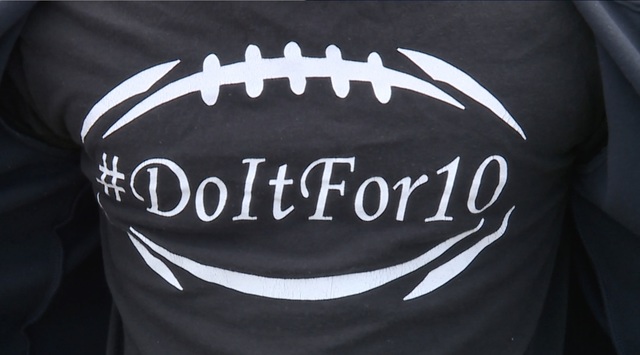 Family and friends wore #DoItFor10 t-shirts, paying homage to the #10 Chapman wore on the football field.

"[He was a] good soul, a good person," said Benson. "Never hanging out with the bad group."

"The violence that's occurring, it needs to stop," said Bryant.

Police reports obtained by News 5 show there have been 24 juveniles shot in Cleveland just in 2018.

Bryant says she's what's left behind when violence claims another victim and no one comes forward with information.

"The only thing I have is videos and memories of the good time that I had with my child," said Bryant.

If you have any information about who shot and killed Michael Chapman, you can call (216) 252-7463 or email crimestoppers18@gmail.com.