State inmates get head start on second chance by refurbishing bins you see throughout N.E. Ohio

A unique community service program at Grafton Correctional Institution created by an inmate group is helping offenders get a head start on a second chance.

In a back warehouse tucked into the corner of the expansive correctional facility, a handful of inmates wearing painter’s smocks are hard at work. Corner by corner, bin by bin, they work diligently, silently and efficiently. Their work on rehabbing the often weathered, beaten and bent recycling bins began less than a year ago.

They’ve rehabbed more than 450 of them.

“These guys take their job very seriously as far as sanding, cleaning and getting these boxes ready to go," said James “Paul” Hendrix, the penal industries manager at Grafton Correctional Institution (GCI).

Spend just a few minutes with Hendrix and you won’t hear him use the term ‘inmate’ or ‘offender.’ He calls them men. And it’s not a matter of semantics.

“My philosophy in life has always been treat someone the way you want them to become - not the way that they have been. That goes even for me,” Hendrix said. “I hope to leave everybody better than I found them and I think that's true with these guys too. When they leave here, they want to be better men than they were when they came here. This is one of the projects that helps them do that."

It all started with an idea. The inmate group ‘Go Home to Stay Home’ wanted a community service project that could possibly allow inmates to chip away at their often-crippling fines and court costs. By doing so, the inmate group theorized offenders who are released from GCI might be less likely to re-offend.

That’s how the partnership with Planet Aid began.

“It's skills training. It's the purpose of life. It is being engaged in something more meaningful. Without a doubt it has a great benefit to society at large,” said Kai Nielsen, a regional manager for Planet Aid, a registered non-profit. “It aligns very much with our core mission to further recycling in the United States and support development-aid projects in the poorest parts of the world.” 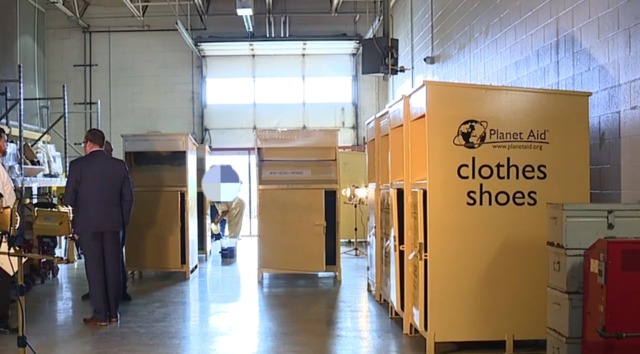 Planet Aid collects and recycles used clothing that is donated and deposited inside the thousands of large, yellow bins that are scattered across the country. There are dozens of bins in Northeast Ohio. Once the clothing is collected and organized, many of the garments are sent to impoverished nations. Money from the sale of some of the clothing is also used to fund development projects, including water wells in many African countries.

But because those bins are left in the elements, vandalized or hit by the occasional distracted driver, the bins are in a constant cycle of needing repair. That’s when the inmates come in.

The group members quickly gravitated to the program when it was launched in July 2017. The inmates at GCI are considered level one or level two, often the most well-behaved inmates in the state correctional system. Because of this, the inmates are granted access to special programs including vocational training and even the training of therapy dogs. According to state records, the rate of inmates who re-offend within three years of their release is around 30 percent, which is significantly below the national average of more than 60 percent. Many state officials point to these programs within prison walls as the reason for a lower recidivism rate compared to the national average.

In fact, reducing recidivism is in GCI’s mission statement.

When the Planet Aid bins started rolling into GCI in July 2017, the inmate group members quickly gravitated to the project, Adam said. They quickly learned how to correctly sand, prime and paint the boxes, as well as apply the Planet Aid decals. Their work resembles that of an assembly line, allowing the group to refinish the bins ten at a time.

The group impressed Hendrix from the start.

“Planet Aid is amazed. I'm amazed,” Hendrix said. “I ran a business on the outside before I came to the state working at the institution here and I'd be proud to hire any of these guys to work for me.”

Hearing someone say that – and say it with sincerity – was enough to leave Adam choked up, even just a little bit.

“There's a lot of us in here that are decent people that made mistakes. We are hard workers and it's nice to have people judge you for who you are, what you're about and what you do instead of what you might have done,” Adam said. “It gives them a feeling of self-worth.”

For their work on the bins, the inmates receive credit that can be applied to either their court costs or fines. The inmates earn the equivalent of minimum wage. So far, nearly two dozen judges in Cuyahoga, Summit and Lorain counties have signed off on the program. Upon their release, inmates are provided several different outfits of clothes from Planet Aid, including dress pants, dress shirts and a pair of shoes so the inmates can have something to wear at potential job interviews. As part of the program, they are also given vouches for food and items from the Salvation Army and Hardee’s. 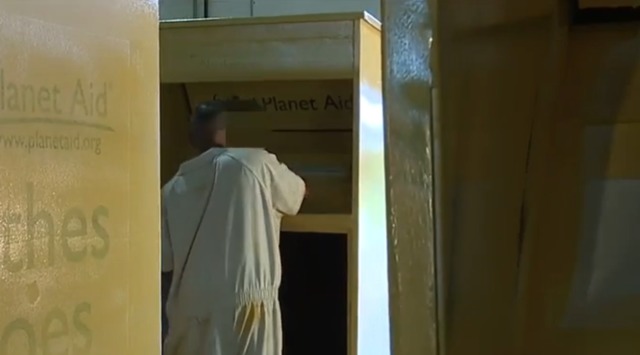 No part of the program comes at the expense of taxpayers, Nielsen said.

When the program participants are eventually released from prison, there’s a solid chance they will come across a Planet Aid bin they helped restore.

“It gives [inmates] pride that they did something, that they accomplished something. It also benefits them along the way.”