Inside one of the oldest beer garden buildings in Cleveland, Forest City Brewery founder Jay Demagall says his two-year-old business is a "neighborhood brewery."

Inside one of the oldest beer garden buildings in Cleveland, Forest City Brewery founder Jay Demagall says his two-year-old business is a "neighborhood brewery." 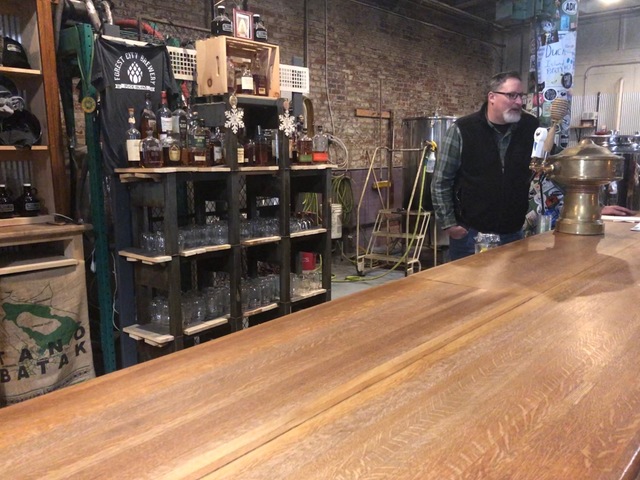 </p><p>Demagall chats with people at the Forest City Brewery Bar.

"A lot of our customers will ride their bike in, they'll walk to the brewery," said Demagall, pointing out that the West 25th RTA Red Line stop isn't far away.

He says the roughly two-mile Red Line to Greenway plan could only help bring more people to his door. The idea for the path came together with the help of Lennie Stover and his fellow Rotarians, who volunteered their time to maintain the stretch of land near the West 25th stop for decades. 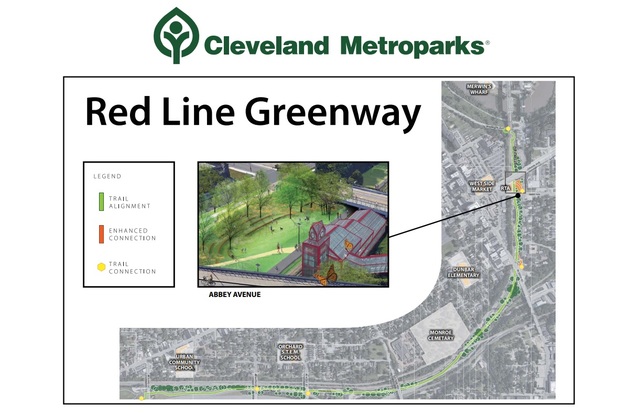 </p><p><strong>A map from Cleveland Metroparks shows the path the Red Line Greenway would take from near the river to Zone Recreation Center.

They brought together groups like the Greater Cleveland Regional Transit Authority (RTA), who owns the property, N.O.A.C.A., and Metroparks to make the project happen. 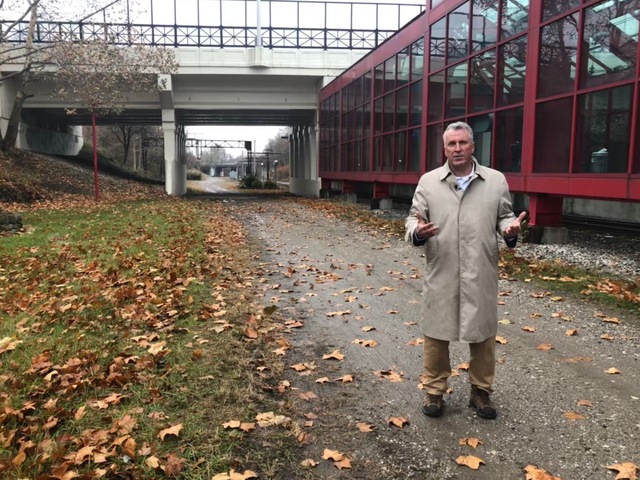 </p><p><strong>Stover stands next to the West 25th Street RTA station, where the original Red Line tracks once were. That is roughly the spot where a bike trail will be built.

"It would be a multipurpose trail," said Stover. "It's one of the nice things, it's not just a bike trail." 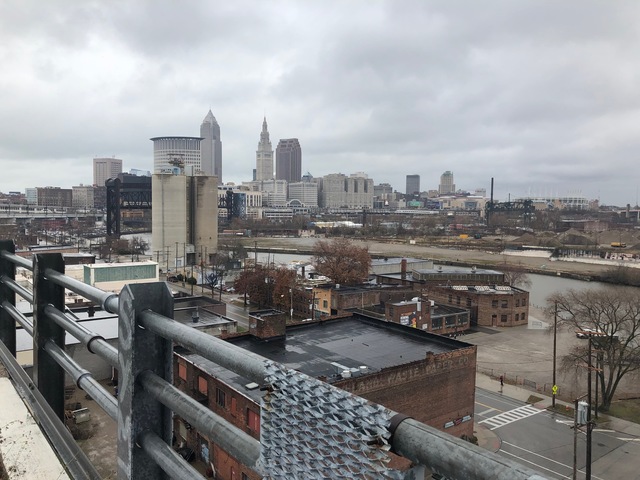 </p><p><strong>The "Million Dollar View" off the bridge towards downtown, over the Cuyahoga River. Phase 3 could one day extend the trail over the bridge, bringing users across the river.

"Be it a railroad, be it a roadway, Interstate 90, the rail line along the lakefront, all those are barriers that we now need to overcome to reconnect people," said Cleveland Metroparks Chief Planning and Design Officer Sean McDermott. 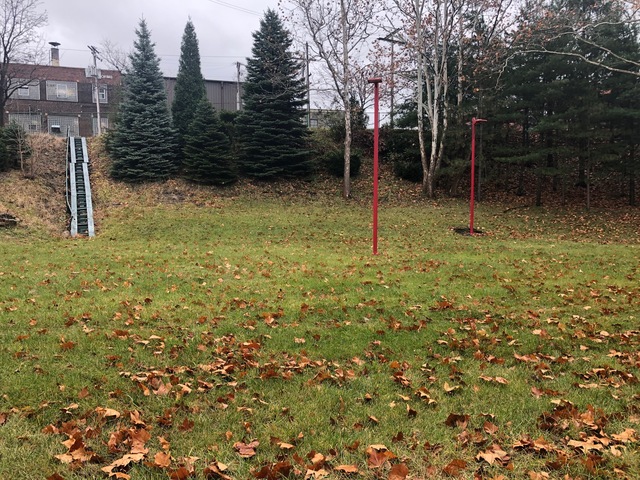 </p><p><strong>This patch of land next to the West 25th Street RTA station has been maintained by Stover's Rotary Club for decades.

McDermott says a big part of the reason the project has already gotten millions of dollars in federal grants is because it reconnects parts of Cleveland that have become disconnected over time. 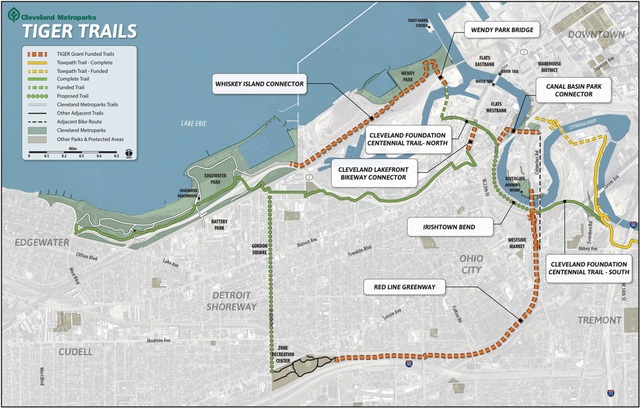 To do it, Stover says he envisions a "linear park."

While traditional parks are in the middle of cities and are closed in by streets or fences, "a linear park connects people and encourages you to explore," said Stover. 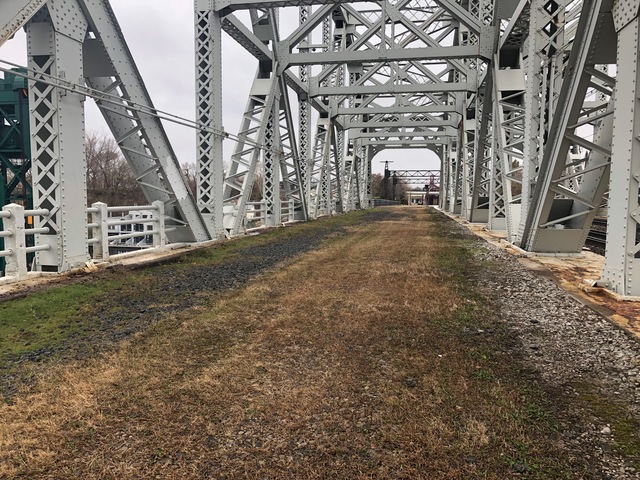 </p><p>The view looking back towards the West 25th Street RTA station from the part of the bridge that is over the Cuyahoga River.

McDermott says that fits right in with the Metroparks main goals.

To do it, the trail will run from the Zone Recreation Center on Lorain and West 65th Street to the Cuyahoga River, near Hoopples at 1930 Columbus Road.

That two-mile stretch would connect the following communities:

But, the trail might not look exactly how Stover envisions it right now.

In August 2018, RTA took the first step towards potential development by publishing a Request for Qualifications for developers.

In a statement, RTA says:

The Greater Cleveland Regional Transit Authority (RTA) is seeking to develop a key parcel of land located along the RTA’s Red Line, with frontage on Columbus Road between Abbey Avenue and West 25th Street, near RTA’s West 25th Street Station. The unique location straddles the line between the Ohio City and Duck Island neighborhoods of Tremont in the City of Cleveland. Both neighborhoods are experiencing tremendous real estate development activity and reinvestment.

Stover says that could drastically change the effect of the project. 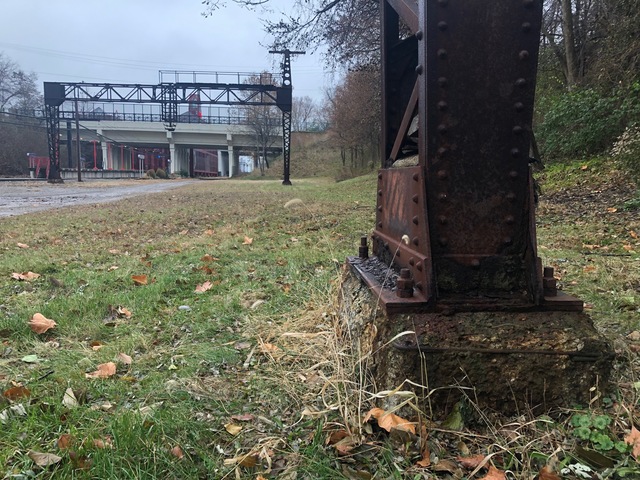 </p><p>These structures held power lines for the original Red Line tracks, which ran on what is now a dirt trail.

"By developing one whole side of that valley, you've now eliminated that green valley and you've created what I think of as a cement alley," said Stover. 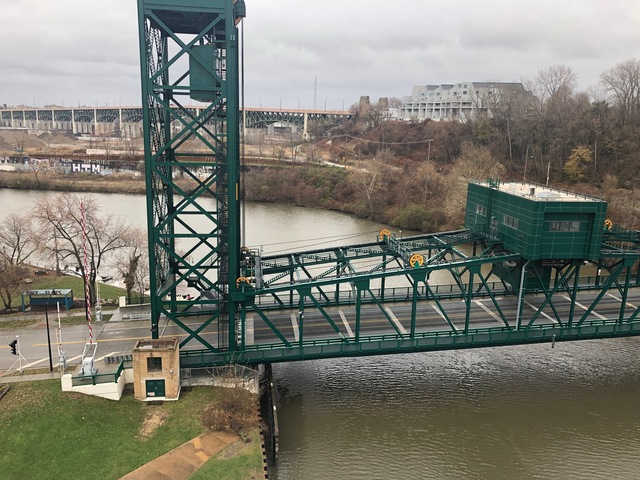 </p><p><strong>The view towards the Scranton Peninsula from the bridge near the Red Line Greenway. The trail wouldn't reach this far out until Phase 3 is completed.

Demagall says if the land is developed, it would change what makes his neighborhood attractive.

"We know that trees increase home values, they increase the liveliness and wellness of communities they're in," said Demagall.

Federal grants helping fund the project require that it gets finished by the end of 2020, so construction is expected to start by the middle of 2019. 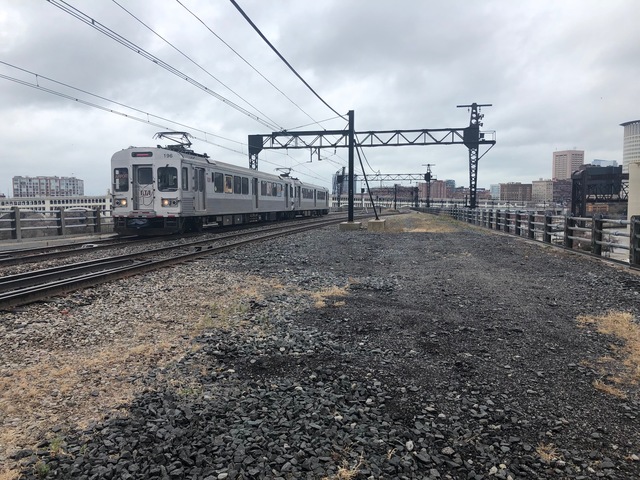 Eventually, a third and final phase of the project could extend the trail over the Cuyahoga River on an existing rail bridge, but there is no timeline for when that might be planned or built.