Getting Progressive Field ready for the home opener 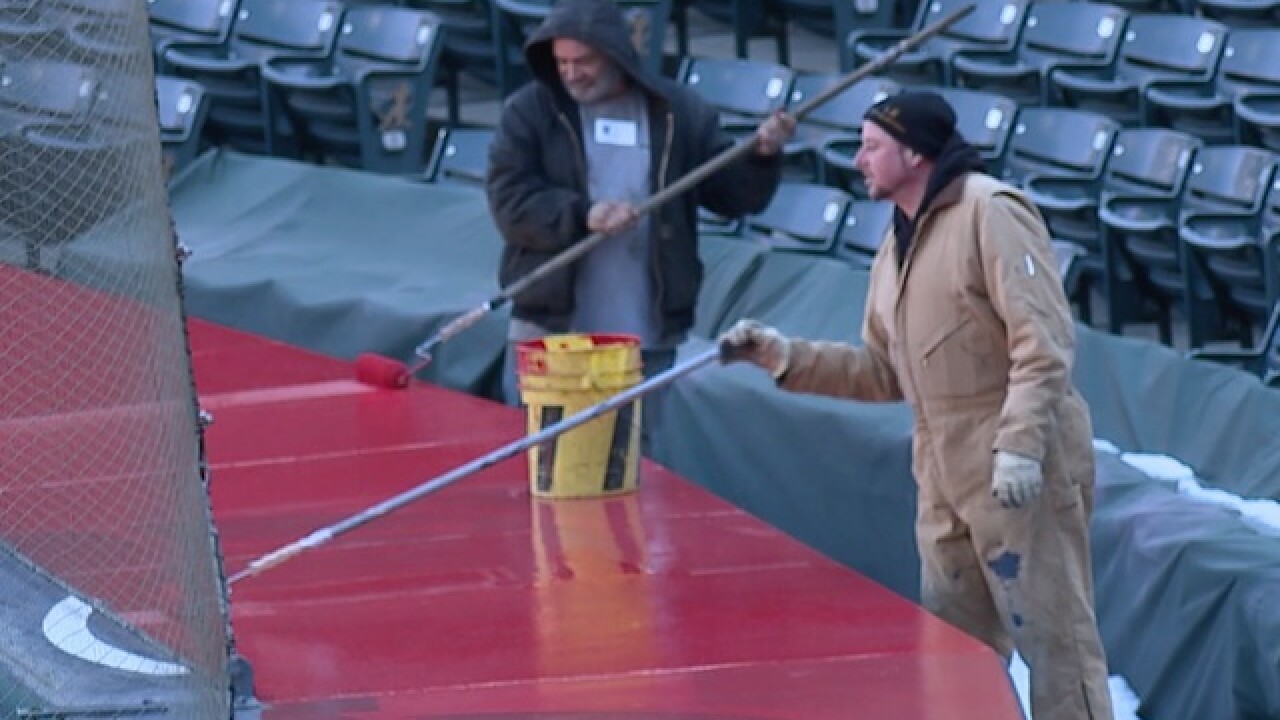 Imagine having a second home that you only use in the summer, and when you close it up in the fall you'll have to leave most of the windows open, exposing the place to winter's worst. Welcome to Progressive Field.

"We are exposed to the weather, so all of the concessions and the restrooms and the water fountains, we have to drain all of that water during the off-season so the pipes don't freeze up," said Jim Folk, the Cleveland Indians Vice President of Ballpark Operations. "We got to crank it all back up now."

This year marks the ballpark's 25th Opening Day, and Folk has been here for all of them.

"We've got a very structured approach to when and how and where we turn the water on," Folk said of the almost room by room process.

"Every time we turn one of those on we've got guys running in and out of various rooms making sure we didn't split a pipe someplace. Then if we did, we've got to turn the water off, we've got to make some repairs and then try it again. That takes a fair amount of time."

As they're doing that, paving crews are filling cracks and making repairs, while painting crews tend to the tons of steel that need to be painted for aesthetic and longevity reasons.

That sort of attention to detail, Folk said, is what has enabled this ballpark, which opened in 1994, to outlast others.

"We opened the same day as the Texas Rangers new ballpark, [now] they're building a new park to replace Rangers Stadium. Atlanta opened, what was Olympic Stadium in '96... now they've just opened a new park a year ago."

"We've really taken very good care of this place from a physical standpoint," Folk said of the ballpark's secret. "We've done the maintenance and the repairs that have needed to be done, so we've extended the life of the infrastructure really past book life on most of these things. Working with Gateway, our landlord, has just been a terrific process."

As he talked, the field's sprinkler system came on section by section. Crews testing again the underground pipes, but also helping to drive the frost out of the ground, making sure the field will be in summer shape.

"In your backyard if the grounds frozen [you say], 'oh well no big problem,' other than for the squirrels trying to find the acorns, but here if we've got frozen ground the balls going to bounce different, it'll play differently for the fielders," he said, taking time to sing the praises of Cleveland Indians Head Groundskeeper Brandon Koehnke and his crew.

Opening Day is a magical time for those in the game of baseball and the fans, Folk said. There's a wow factor that he enjoys contributing to each year, and the key to that is having the place look better each April than the fans left it in October.

"It's just like you're having a party for 36,000 of your closest friends and you got to get your house ready for it."