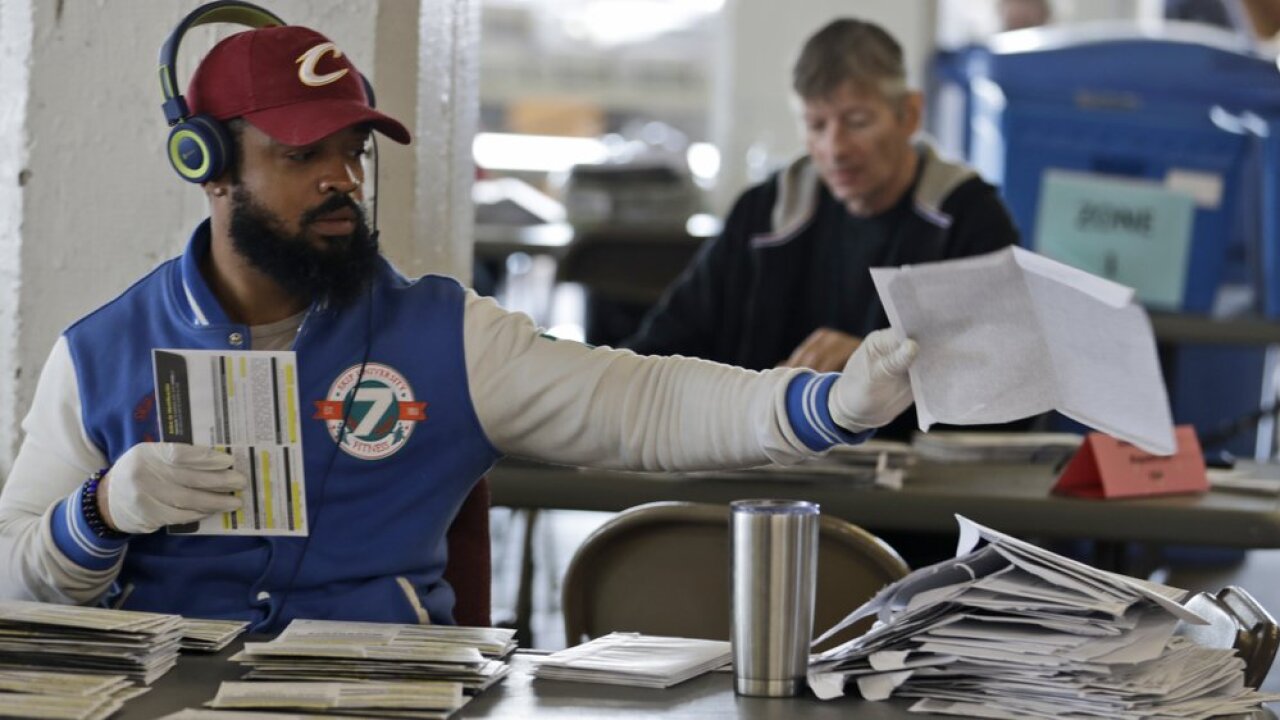 (AP Photo/Tony Dejak)
Board of election worker Skip White processes ballots at the warehouse for the Cuyahoga County Board of Elections, Tuesday, April 28, 2020, in Cleveland. The first major test of an almost completely vote-by-mail election during a pandemic is unfolding Tuesday in Ohio, offering lessons to other states about how to conduct one of the most basic acts of democracy amid a health crisis.

CINCINNATI (AP) — A Democratic U.S. House incumbent faced a spirited challenge in central Ohio and two Democrats competed to take on a potentially vulnerable Republican congressman in the Cincinnati area as Ohio’s extended primary voting came to an end Tuesday.

There were primary races in most of the state’s 16 congressional districts, and incumbents handily won nominations in the districts that had reported totals.

Voters were also voted for state legislative and judicial nominees and candidates for local offices. Many ballots also have school and other levies to be decided.

State officials called off in-person voting just hours before the scheduled March 17 primary for public health reasons during the coronavirus outbreak. Voting continued mostly by mail, with Tuesday’s in-person voting at county election board offices limited to disabled and homeless people and voters who attested they didn’t get their requested ballots back by mail in time.

Secretary of State Frank LaRose, a Republican, said while some things will be different for this election just as they are in daily lives now, voters can feel confident about its integrity.

“We’ve run elections through difficult times before,” LaRose said. “We’ve run elections through world wars, through depressions, through all kinds of difficult circumstances. Even though this COVID-19 pandemic has changed a lot about our lives, there are things that never change. ... Your voice matters and your vote will be counted, and Ohio’s elections officials are going to be ready to make sure that we have an honest, a fair and an accessible election.”

Ohio’s congressional districts were drawn for incumbent safety, but Rep. Beatty in Columbus drew a Democratic challenger from the left in Morgan Harper. Harper was endorsed by Justice Democrats, the progressive political action committee that helped give rise to Rep. Alexandria Ocasio-Cortez of New York.

Schroder, and Foster, were battling in House District 1 to oppose 12-term Republican Rep. Steve Chabot of Cincinnati. Both Democrats say they believe Chabot’s district is ripe for an upset, with Republican President Donald Trump looming as an issue they could try to use to sway suburban female voters.

In nearby District 10, Republican incumbent Mike Turner, former mayor of Dayton, easily won his party’s nomination and will face Democratic nominee Desiree Tims. Tims has worked for conservation and child care groups, and also on the staffs of Ohio Sen. Sherrod Brown and New York Sen. Kirsten Gillibrand, both Democrats. Turner was first elected to Congress in 2003.
_