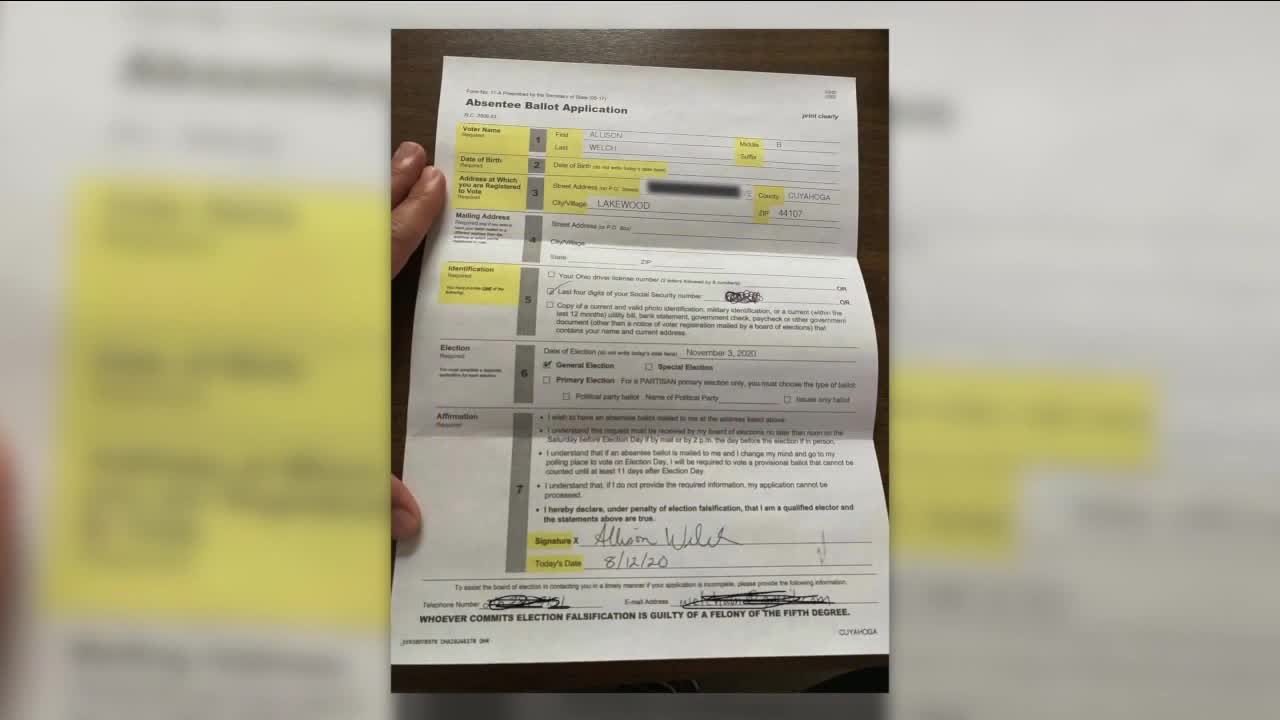 During a briefing about the upcoming presidential election, Secretary of State Frank LaRose urged Ohioans to request their absentee ballots sooner than later despite the law allowing voters to request ballots until the Saturday before the election. 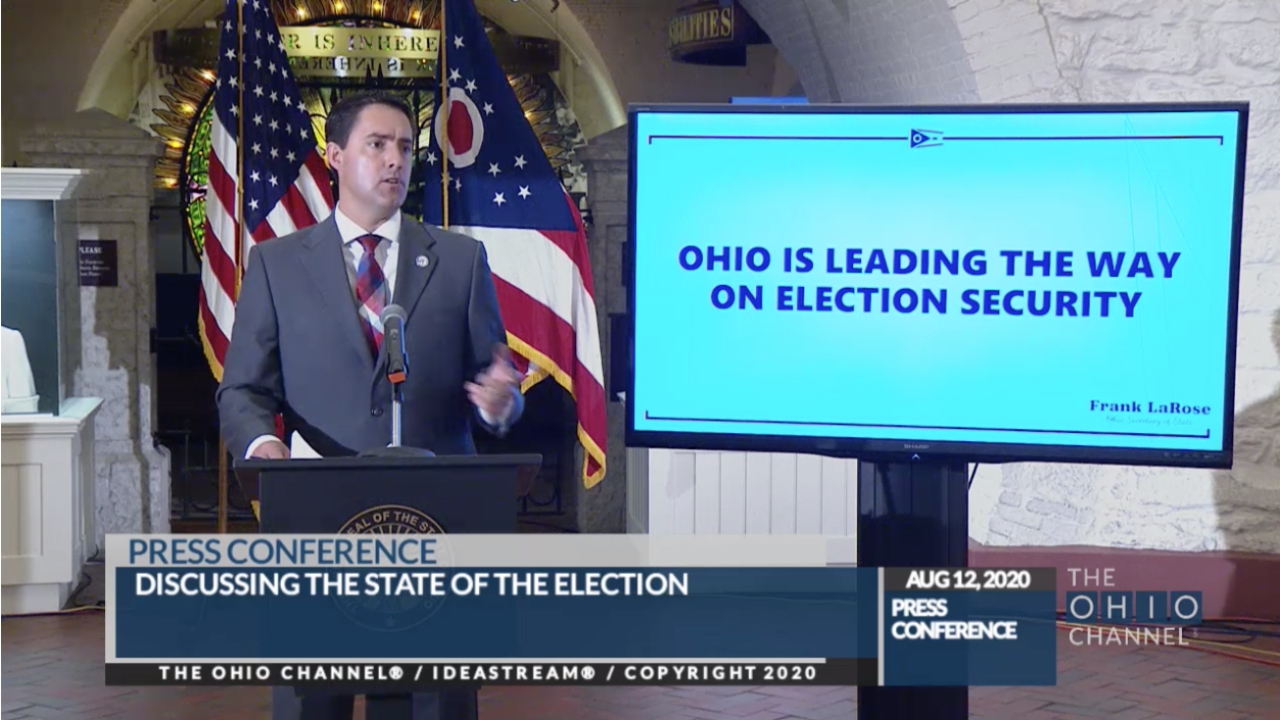 CLEVELAND — During a briefing on the upcoming presidential election, Secretary of State Frank LaRose urged Ohioans to request their absentee ballots sooner rather than later, even though the law allows voters to request ballots until the Saturday before the election. He confirmed he will allow a single drop-box location at each county board of elections but not more because they could invite future lawsuits.

"I will continue to tell people not to wait that long to request your absentee ballot. The law may permit it, but it’s a foolish thing to do and will likely result in you getting your ballot after Election Day," LaRose said during his briefing at the Ohio Statehouse on Wednesday.

LaRose reiterated to Ohioans there will be in-person voting on Election Day despite the conspiracies that have been circulating. He also reassured the public that voting will be secure.

No extra ballot drop boxes
LaRose said he will not allow the state's county boards of elections to offer more than one drop box for completed absentee ballots this November, saying that it’s too late to change the way Ohio has administered this year’s election. Starting Sept. 1, each county board of elections must have a drop box in place.

He asked Attorney General Dave Yost to see if it was legal to allow for additional drop boxes.

“What I decided was instead of waiting for continued legal analysis, was to move forward to say we are not going to allow additional drop boxes for this election. With under three months to go until Election Day, I don’t think it’s time to change the way we have done things here in Ohio and add new drop boxes and questions about the validity of that," he said.

“I do not know what is happening at the Secretary of State’s office. Hundreds of voting experts and everyday Ohioans have asked him to improve our elections by allowing multiple secure drop boxes to be deployed in our counties. Cuyahoga County has one million people and one ballot drop box. That led to traffic jams in the chaotic primary election. Yet, after sending the question to Attorney General Yost three weeks ago, today LaRose announced that he withdrew his request before the AG could weigh in. This choice to make voting more chaotic is confounding. If he has the authority to require one drop box, he has the authority to require multiple drop boxes. We need our state government leaders to do their jobs.”

Absentee voting
Every Ohioan registered to vote will receive a ballot application around Labor Day.

Voters are urged to request ballots as soon as possible.

“Procrastination is always a bad idea. Ask any college student. Procrastination is an even worse idea when we’re running an election in the midst of a pandemic and when we know the U.S. Postal Service is not operating at peak efficiency,” LaRose said.

LaRose said typically the rate of absentee voting is between 20-25% but hopes that number will increase with this election.

"We think more Ohioans will vote by mail than ever before. I think 2020 will be the highest turnout presidential election we’ve ever seen in our state’s history. I think it will be the highest rate of absentee voting and early voting. A lot of Ohioans are trying it for the first time so, hopefully, it forms a good habit where they vote absentee for future elections, but we want to make sure they have the education necessary and information necessary to not make mistakes and wait until the last minute."

Allison Welch is one Ohioan who likes voting by mail.

"It's pretty simple," she said, sitting at Lakewood Park Wednesday afternoon. Welch, a teacher in Cleveland, said she's been voting by mail for years. She went to the Cuyahoga County Board of Elections and filled out her application for her ballot earlier this summer. So she was surprised and worried when she opened her mailbox and found another application.

"I got another thing that looked like my absentee ballot application," she said. The form was partially filled in - including her address. She signed the form and was about to put it in the mail when she noticed something small that could have had a big consequence when she went to vote.

"I saw there was a mistake in my name," she said. Her middle initial was wrong. A "B" that shouldn't be there. After taking a closer look at the application, Welch found out it did not come for the state or from the county. It was an application for Ohio from a company called The Center for Voter Information.

On the website, the Washington, D.C. based company describes itself as "a non-partisan and non-profit organization that works to provide even-handed and unbiased information about candidates and their positions on issues." There are two pages dedicated to voting: one with general absentee voter information and a voter registration page.

"We looked at them. It is the official form they are sending out," LaRose said about some of the applications sent to residents. during his press conference Wednesday.

They may pass muster for the Secretary of State, but LaRose encourages people to wait until the state sends out applications Labor Day weekend. His office received more calls about the applications which, he said, was a good sign.

"I think that Ohioans are switched on to thinking about the security of their elections," he told reporters.

Curious about the company, Welch called the Center for Voter Information and was met with a generic call center.

"I think I (pressed) three," she said. "And I waited on hold for a very long time - most of my lunch hour." Welch left a message.

News 5 called the company as well. Our message was not returned before our deadline.

Guidance from the state:

Your county needs your help:

LaRose said Ohio normally has 4,000 polling locations open in the state. These are staffed by 35,000 volunteers who are paid for their civic work. With the pandemic, LaRose said many of the poll workers who normally work fall into the vulnerable population.

"It's time for a new generation of Ohioans to step up and take part in this important civic responsibility," he said.

Some of the ways poll workers are being recruited includes:

LaRose said it's easy to vote in Ohio and Ohioans should take advantage of that, reminding voters they will have the same three options to vote as they have in the past 20 years.

What the state wants you to know:

To request your ballot, visit VoteOhio.gov.