Two weeks before the start of early voting in Ohio, President Trump begins his closing arguments 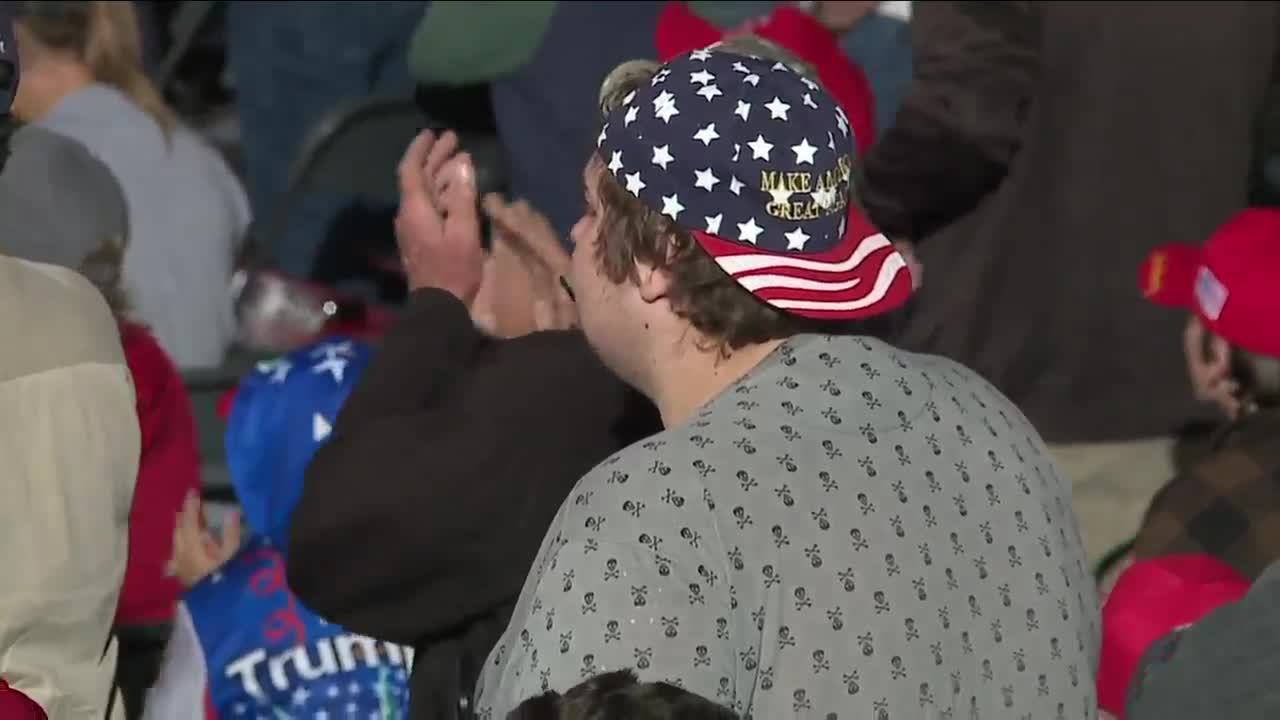 President Donald Trump is visiting Ohio Monday evening, making stops in the Dayton area for a private event and Toledo area for a public rally.

SWANTON, Ohio — From all over Ohio, supporters of President Donald Trump drove to stand on the tarmac of an airport outside of Toledo to see their candidate Monday spending this last night of summer concentrated solely on fall.

“Hello to Swanton, hello to Toledo — I’m glad to be back in Ohio with thousands,” he said after walking off of Air Force One parked maybe 50 yards away.

Ohio is a must-win state for President Trump and so with two weeks to go before the start of early voting, he came to make what will be the first of many closing arguments while dismissing polls that show Ohio as close.

“I just saw that we’re tied in Ohio — I don’t think so,” he said. “No, they’re fake polls almost as fake as the writers.”

President Trump won the state by eight points over Hillary Clinton in 2016 on the strength of many voters who were with Barack Obama in 2008 and 2012 then switched to him in 2016. Of Ohio’s 88 counties, there were nine of them that made the so-called pivot, four of them can be found just a short drive from the president’s stop in Swanton.

Jim Pruitt is the type of voter the campaign was looking to reach Monday — someone who in 2016 sat out but in 2020 is all in.

“I knew I didn’t care for Hillary but I didn’t know a lot about Donald Trump and how he was going to do," Pruitt said. "I was just amazed with all the things that he got done despite all the obstacles, he got a lot done.”

Three days after the death of Supreme Court Justice Ruth Bader Ginsberg, the president vowed to name a replacement Friday or Saturday.

The first mention of the pandemic came 28 minutes into the president’s speech and focused mainly on the return of Big Ten football and his role in helping to move the issue along. At political events in Ohio, pandemic rules of masks and social distancing don’t apply. Still, supporters we spoke with weren’t concerned.

The president restated a claim he made in January when he kicked off his 2020 campaign in Ohio in Toledo saying that 2019 had been the best year the state had ever seen. Congresswoman Marcy Kaptur took issue with that.

“Actually it was the worst year in a decade for job creation and he said to the workers in Lorain, Ohio, which I also represent, that the steel plants were reopening,” Kaptur said. “Guess what, they’re shuttered.”

The president’s chief trade advisor Peter Navarro, though, told News 5 that if that’s the casem the blame is not with the president but with the Democratic trade policies of the early 90s.

“There’s going to be a very clear contrast drawn between Joe Biden, who supported the two worst trade deals in American history — NAFTA and China’s entry into the World Trade Organization — did tremendous damage to the state of Ohio versus President Trump,” Navarro said.

With such a high volume of early voting, look for the pace of these visits to pick up in the coming few weeks, especially in places like Toledo and Youngstown that offer the spillover impact of reaching voters in the neighboring battleground states of Michigan and Pennsylvania.