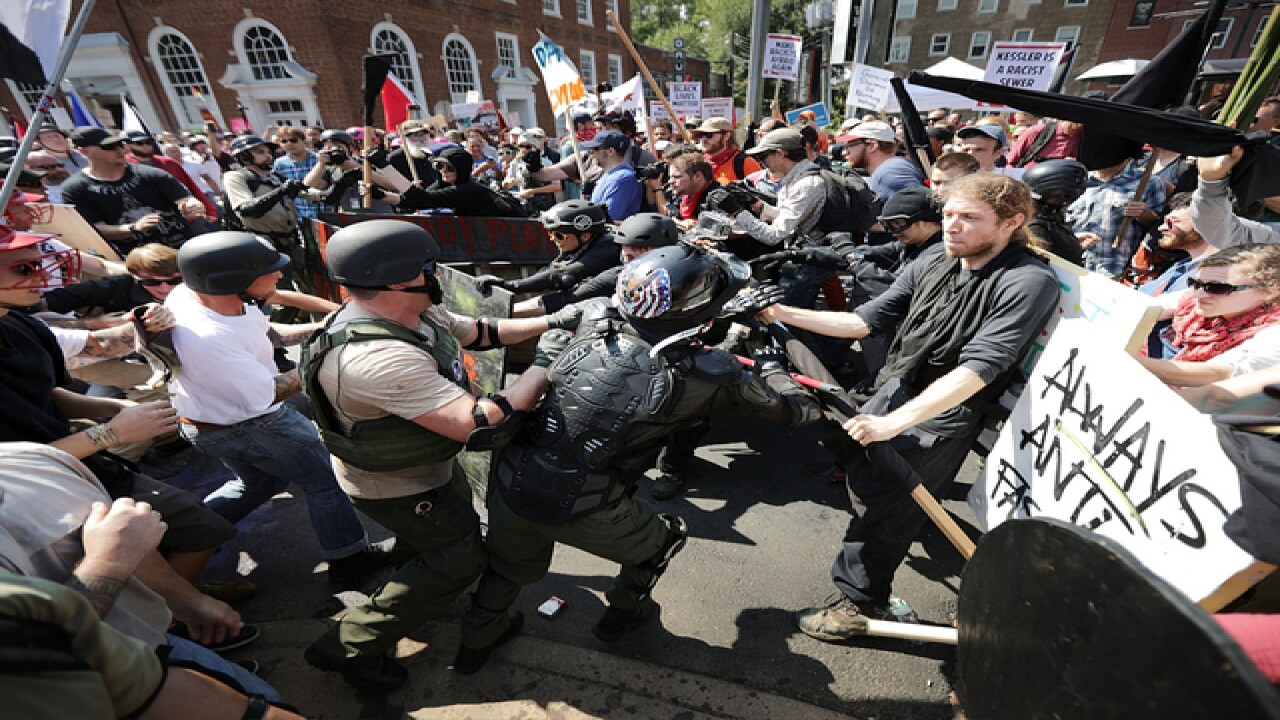 Image copyright 2017 Getty Images. All rights reserved. This material may not be published, broadcast, rewritten, or redistributed.
Chip Somodevilla/Getty Images
<p>CHARLOTTESVILLE, VA - AUGUST 12: White nationalists, neo-Nazis and members of the 'alt-right' clash with counter-protesters as they enter Emancipation Park during the 'Unite the Right' rally August 12, 2017 in Charlottesville, Virginia.</p>

MASON, Ohio -- Police are looking into three Ohio men accused on social media of attending and causing violence at the white supremacy “Unite the Right” event in Charlottesville, Virginia, a spokesman for the Centerville Police Department told The Dayton Daily News.

The three men have ties to Mason and Centerville but no longer live in either area, according to Centerville Officer John Davis and Mason Police Department Lt. Jeff Burson.

Tracey Carson, spokeswoman for Mason City Schools, confirmed one of the men attended Mason High School through his junior year, but did not return for his senior year in 2016-2017.

Davis said his department is trying to be proactive against “a potential problem.” None of the men face criminal charges, he said.

“We’re aware of the reports, and we’re looking into how they might affect the different jurisdictions,” Davis said. “If somebody’s looking for them, there could be a potential problem.”

The Mason man -- who WCPO is not identifying because he has not been charged with a crime -- is accused on social media through videos and photos of violently beating Deandre Harris, a black man, with a pole in a parking garage.

WARNING: The below video contains graphic images and language.

Fight broke out. Nazis beat black kid w/sticks at end. I kick one in back 2 help & he runs after me. Kid is safe but bloody #Charlottesville pic.twitter.com/kr11a8zQ0K

Harris told WRAL in Raleigh, North Carolina doctors used eight staples to seal his head together. He also broke his wrist, chipped a tooth and had a busted lip.

"I'm on my knees just getting beat with poles and signs and being kicked and hit," he said. "It's crazy."

Millions of people have seen photos and video of the attack online since Saturday through Twitter, Facebook and other social media.

The two Centerville men are accused of participating in a torch-lit march and chant alongside other white supremacists. Photographers claim they captured images of the two men and have spread them online to millions.

The identities of the three Ohio men have been discussed widely in social media as part of a national effort to identify individuals who participated in the white-supremacist gathering. Through those efforts, there have been some instances where men in other parts of the country were falsely accused of participating in the event.

The event resulted in widespread fights in downtown Charlottesville between participants and counter-protesters. Two Virginia highway patrol officers died when their helicopter crashed after the event.

News of the southwest Ohio connections quickly spread online, and local officials sought to distance themselves from their reported actions.

“It is hard to reconcile that several Ohioans appear to have been part of the horrific violence that occurred in Charlottesville over the weekend,” Carson said. “Our students and their families deserve to know that we are allies in the fight against bigotry.”

Multiple attempts to reach the men for comment were unsuccessful.

News 5's sister station WCPO has been investigating the possible connections between the incident in Charlottesville and the Ohio men. We have not previously reported this information because no arrests have been made and law enforcement officials have not confirmed the men are connected.

We are reporting this information now that police in Centerville and Mason have confirmed that they are monitoring the situation.

However, we are not naming the individuals because they have not been charged with any criminal actions.

A judge on Monday denied bond for James Alex Fields Jr., another Ohio man accused of violence during the protests.

Fields -- who grew up in Florence, Kentucky but later moved to Maumee, Ohio -- is accused of ramming his car into a crowd of protesters, killing one woman and injuring 19 others.

The “Unite the Right” rally was held by white nationalists and others who oppose a plan to remove from a Charlottesville park of a statue of Confederate Gen. Robert E. Lee.

The Dayton Daily News contributed to this report