Beaten but not broken: Survivor of five hours of brutal rape, beating is focused on recovery

Five weeks ago, she endured five hours of hell.

She was repeatedly raped, severely beaten and left on the brink of death by a man she had never met. Her vision still sometimes escapes her. Her memory of what happened never leaves her. But the victim of a savage, depraved rape and beating in late March has found the strength she didn’t know she had.

With her alleged rapist facing the possibility of dying in prison, the victim remains focused on her physical and emotional recovery.

“I can’t drive. I can’t go back to work. I can’t fill out my medical forms or the ‘get well’ cards people have sent me,” the victim said. “My mom has done a fantastic job of being my secretary.”

She still has her sense of humor and that warm, inviting smile you’d expect to find on a grandmother’s face. But despite her continued efforts, what happened to her follows her like a shadow.

Left happily exhausted from spending the day with her grandchildren, the woman lay asleep in her Euclid apartment. Then, the kitchen window was shattered. What happened next shattered the woman’s sense of security.

Archie Leak, 52, is a career criminal who has done numerous bits for burglary, breaking and entering and theft. Run-ins with the law appear to be one of the few constants in his life, according to court records. On March 29th, he allegedly entered the woman’s apartment through the window he broke.

Over the next five hours, police believe Leak raped and beat the woman over and over and over again. The only respite came when Leak rifled through the woman’s fridge, helping himself to her leftovers, the woman said. He also took her rent money. Then, he used a sharp pair of scissors to cut three small tufts of hair from her head, seemingly as a souvenir, she said.

The victim said she had never met Leak prior to March 29th.

As dawn broke, Leak allegedly left his victim battered, beaten and broken. She had several broken bones in her face. Her eyes were swollen shut. Her entire body was thrashed to the point that screaming for help was almost too difficult.

Sometimes, strength comes at the most unexpected moments.

“I never really thought I was a strong person,” the victim said. “Looking back at everything I’ve been through, I guess there was some inner strength that made me want to stay alive.”

That newfound inner strength helped her slowly down the stairs. Caused by hours of torture, the woman’s wounds sent shooting pain cutting through her entire body like knives. Pain punctuated each step.

At the bottom, exhausted and in a state of semi-consciousness, she slept. Then, around 10 a.m., her cries for help were answered by a next door neighbor.

“To me, I think he took away my whole life. My whole way of life is different now,” the victim said. “I don’t like to go out in crowds. I’m scared of every little noise. I’m scared to be by myself.”

The past five weeks have been a slow-moving whirlwind. She’s been shuttled to and from meetings with police and prosecutors and doctor’s appointments. The surgery to repair the broken bones in her face went better than expected. However, she is still unable to read or drive. She’s not expected to totally regain her vision for another six to 12 months.

The memory of the harrowing ordeal continues to haunt her.

“I don’t know if [Leak] realizes it, but he’s changed my life for the worst. I am not myself. I don’t like who I am right now,” the woman said. “I want my old life. I want my old self back. But, again, it takes time. Yeah, I feel like he took away my whole life that I had before. I don’t know if I will ever get it back.”

The woman’s friends, family and the community at large are trying their hardest to help her get her life back. Thousands of dollars have been raised through a GoFundMe page that her daughter set up. On May 23rd, another fundraiser will be held to help raise money to cover her mounting medical bills. With no income, that debt only continues to rise.

The woman said she’s indebted to the detectives who tirelessly worked her case, the doctors who helped repair her broken bones and the community for helping to mend her broken soul. The rest of her recovery, she said, will take time.

And time, sometimes, takes its time.

“I really had to rely on a lot of people and everybody has been really nice about it. They are there when I need them, but I’m just the type that I’ve always been very independent,” the woman said. “I don’t like the fact that I can’t do things for myself. But I’m very appreciative of everybody helping me when I do need it.”

She’s not a victim; she’s a survivor. While her life was forever altered on March 29th, she is begrudgingly learning to live with the shadow on the wall.

“It’s just a whole new way of life that I really don’t like,” the woman said. “It wasn’t my choice. It wasn’t a choice that I made. It was a choice that he made. And it wasn’t a very good choice.”

The fundraiser scheduled for May 23rd will be held at Tizzano’s Party Center, located at 1361 E. 260th St in Euclid. The event begins at 6 p.m. Tickets are available for purchase at Schwebel’s Bakery at 345 E. 200th St. 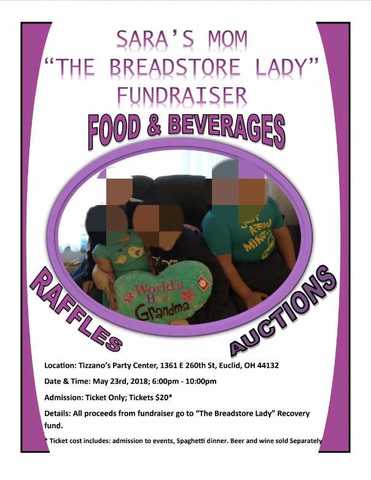