Data shows it is more difficult to be black than white in Cleveland, Cuyahoga County

Eye-opening new data from a local think tank shows it is more difficult to be black than white in Cleveland and in Cuyahoga County.

Eye-opening new data from a local think tank shows it is more difficult to be black than white in Cleveland and in Cuyahoga County.

The research from the Center for Community Solutions finds that there is no question that race matters when it comes to outcomes — health, economic, and more. It quantifies what has been anecdotally known for decades.

"Black residents in Cleveland and Cuyahoga County would not be surprised by this, but I think what is surprising is the magnitude of the issue," said research associate Kate Warren.

According to Warren, black residents face worse outcomes throughout their lifetimes — from birth to death. 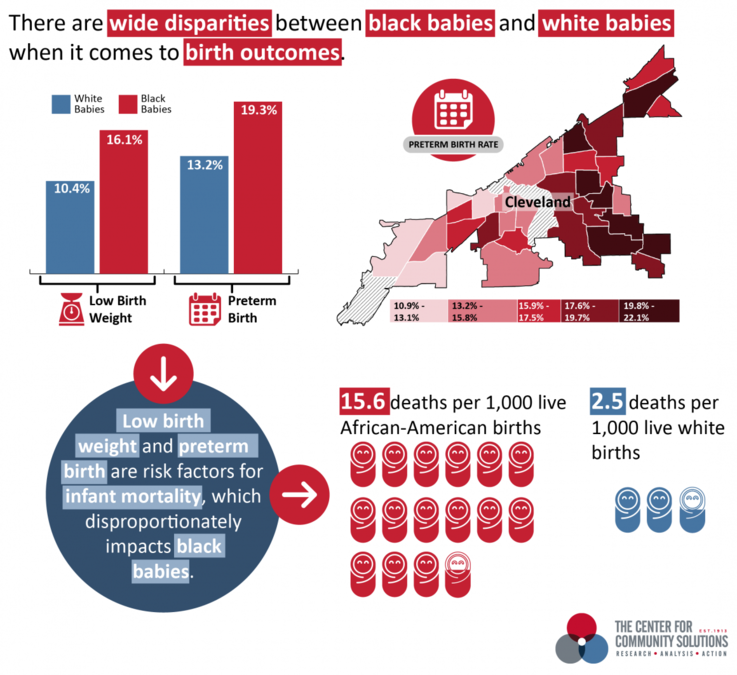 The infant mortality rate is higher for black babies, who are six times more likely to die.

White residents live six years longer than their black counterparts and the poverty rate is nearly double when it comes to black residents.

In schools, the study found, black children are disciplined at higher rates, which leads to a higher number of African-Americans in the juvenile justice system — and that disproportionately higher number continues in the adult prison system.

When it comes to health —those living in the highly segregated black neighborhoods and cities on the East Side are at a much higher risk of having asthma, high blood pressure, and diabetes. 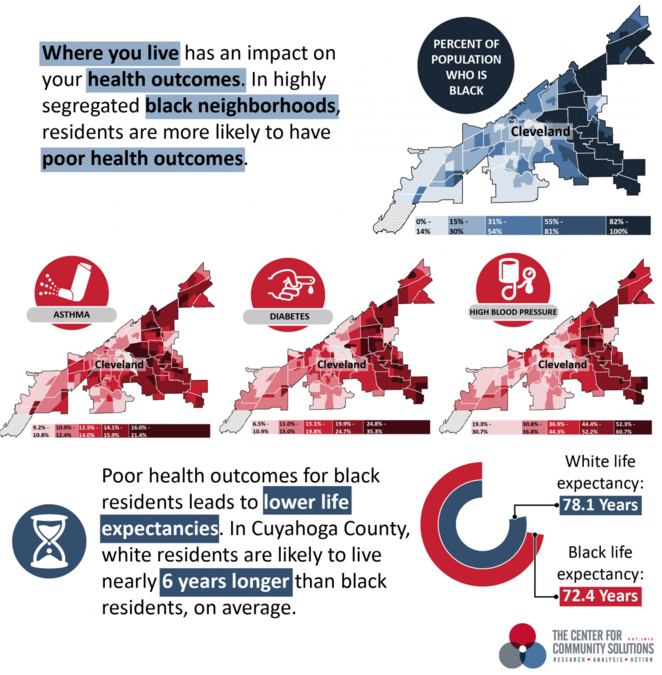 The data is presented in infographs — data that Warren hopes will spur change.

“My hope is that people will see this and have an increased awareness of the very tangible impacts that race and racism are having in our community,” Warren said. “And that folks will be spurred to action, that people will come together to think about, what are ways that we as a community can do better.”

Warren said the racial disparity stems from historical racist policies like redlining but continues because of what is happening now.

That’s something you don’t have to tell Bianca Butts twice.

“None of it is shocking to me, but I’m still shocked sometimes that other people are just now being shocked by it, that is surprising,” Butts said. “I’m happy they’re shocked, I’ll be even happier when we act.”

The Cleveland native was born and raised in predominantly black Buckeye-Shaker neighborhood. She now runs Nia Solutions, which focuses on centering equity in community engagement practices to connect and build bridges with stakeholders with a lens of environmental justice for urban communities in Cleveland and beyond.

“So it is kind of like a ‘Duh, I already knew this,’ but everybody doesn’t know,” Butts explained. “And in order to create change, you have to kind of enlighten minds and bring light to situations people may not understand because it’s not their lived experience.”