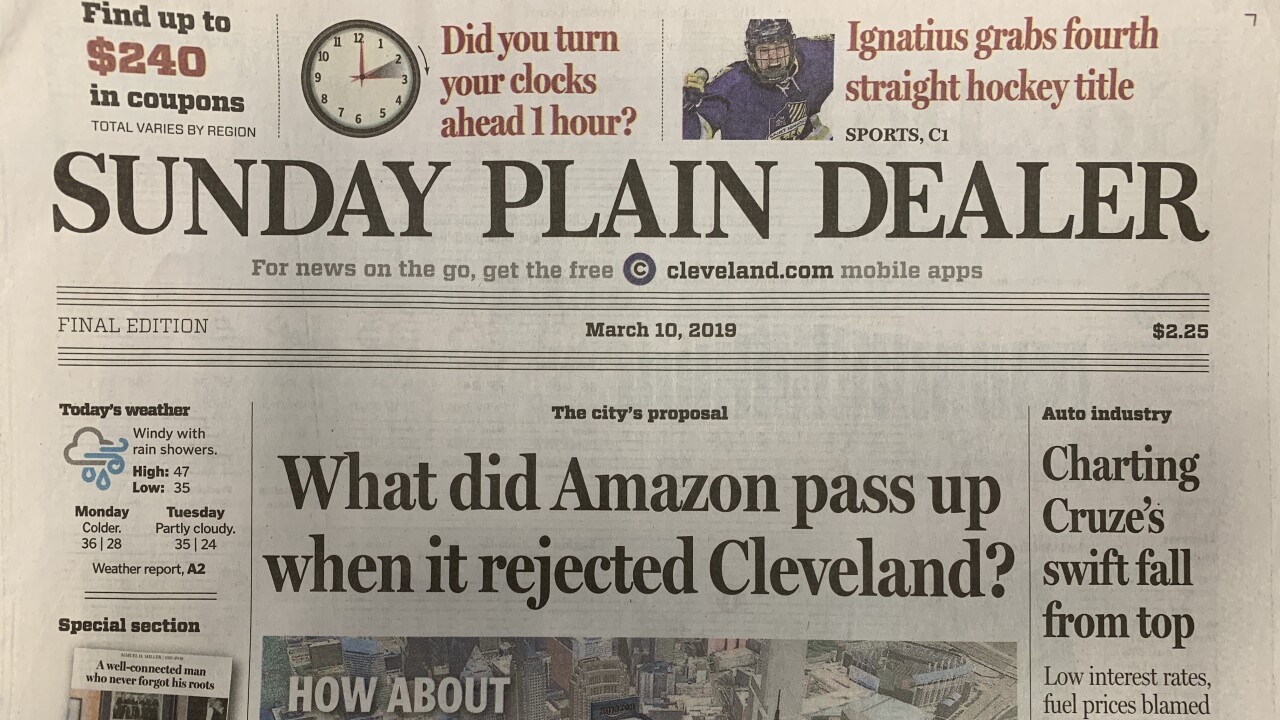 CLEVELAND — Friday afternoon, Plain Dealer President and Editor George Rodrigue announced that a dozen reporters and editors will lose their jobs when the nearly-180-year-old institution downsizes in the following weeks.

Dwindling advertising revenue was cited as a major driving force in the decision to eliminate positions. This comes on the coattails of an announcement in December that the paper was moving to a centralized system to proof and publish national stories shared across various other newspapers.

In a Dec. 27 article on Cleveland.com, Rodrigue said the centralization efforts would eliminate 29 positions at the paper.

Rodrigue noted that newspaper advertising revenue has continuously gone down since 2001 and is now below where it was in the 1950s. “This has forced newsrooms around the country to make painful adjustments,” Rodrigue wrote.

He has called the move a “kind of tragedy, and one that will be deeply felt by everyone at The Plain Dealer.”

You can read the entire announcement from Rodrigue below:

“Since around 2001, newspaper advertising revenue nationally has been plummeting. It’s below the levels of the 1950s now. This has forced newsrooms around the country to make painful adjustments. I’m writing to tell you about one The Plain Dealer will be making soon.

Within approximately two weeks, we plan to reduce the net size of our newsroom staff by 12 reporters and editors. The essence of a reduction in force like this is that good people lose their jobs, through no fault of their own. That is a kind of tragedy, and one that will be deeply felt by everyone at The Plain Dealer.

The planned layoffs are in addition to changes we announced in December, involving the shift of page-production work from our free-standing production desk to a centralized system. That new production system is planned to start in early May.

Necessity has driven both moves.

On the production side, we felt the need to take advantage of vastly improved technology. About half the content of a paper like ours is, and long has been, regional or national. Newspaper companies have found that it is far more efficient to share production of such pages across multiple papers, rather than asking each newsroom to produce all its pages alone. Local stories here, however, will still be assigned, written and edited locally.

The pending loss of reporters stems not from efficiency breakthroughs but from declining advertising revenue. Our print subscribers have been extraordinarily loyal, even as we have been forced to raise our rates. But there must be a limit to their generosity; we need to keep our expenses within the means of our readers.

At the same time, we can’t afford to let our readers down. We have been a community voice and a civic watchdog for nearly 180 years. We have coped with countless disruptions during that time, from the invention of electricity to the creation of radio to the pervasiveness of the Internet. At each juncture, we’ve had to reshape ourselves. This is not the end of that story, but another chapter in it.

Our future lies in listening more closely to our readers and in using our substantial remaining resources to serve them better, as citizens, workers, and residents. We plan to become better partners for all who wish to make the most of our region’s great resources and to meet its many challenges.

In surveys, letters and conversations over the past year, our readers have offered us valuable insights on how to do those things. Soon, we’ll share more information about those plans.

For now, I want to thank all of our journalists for pouring their souls into a noble calling, and to acknowledge the heartbreak that accompanies this news. I also want to thank our subscribers and our advertisers for supporting us as we have evolved over the past decade. A region like ours deserves a great newspaper, and your loyalty sustains us.”