The birds have landed in Cleveland, and we do don't mean the animal variety. Small, black, electric scooters were spotted Friday morning parked along the sidewalks downtown.

The scooters are part of a ride-sharing program that has been rolled out across various locations throughout the country. With the simple download of an app, pedestrians can hitch a ride and cruise through the city on the electric vehicles for 15 cents a minute and a $1 charge.

While the flock's arrival opens Cleveland up to another form of transportation, some cities across the country didn't exactly roll out the red carpet when the scooters unexpectedly arrived.

Some metropolitan areas like Boston warned the company that the scooters would need to permission in the city to operate before they could be simply dropped off on the sidewalks. City officials in Providence, Rhode Island actually ordered Bird to remove the scooters from streets until rules could be put in place to govern the scooters.

So far, Cleveland seems a bit more welcoming. Even RTA tweeted a photo Friday with a greeting to the company.

Other Twitter users took to social media to talk about the scooters:

Dozens of @birdride scooters just popped up all over #Cleveland this morning. Wonder if I was user 1? pic.twitter.com/gZduwOYZMA

A quick look at the Bird app shows more than a dozen bikes centered near downtown. 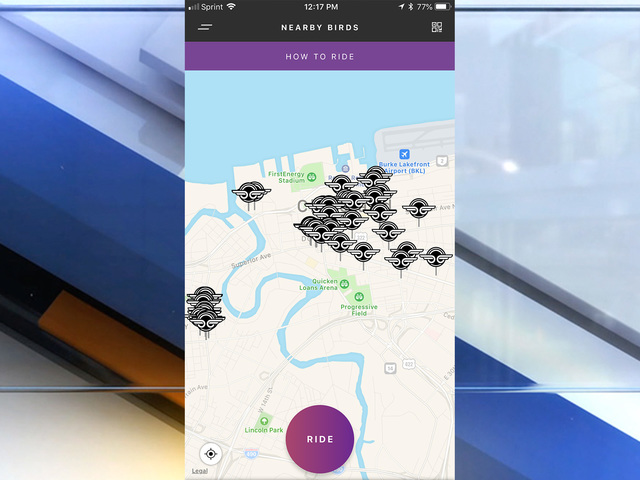 According to the Bird website, the company uses what it refers to as its "Save Our Sidewalks" (S.O.S.) Pledge. The pledge consists of three steps.

The first step involves the daily pickup of Bird scooters left throughout the city. The scooters are then inspected for wear and tear and any needed repairs are done.

The second step is what the company refers to as "responsible growth." Bird states it will not increase the number of vehicles in a given city unless they are being used on average more than three times per week — going as far as removing underutilized vehicles.

The last step involves revenue sharing. The company says it offers host cities to "remit $1 per vehicle per day to city governments so they can use this money to build more bike lanes, promote safe riding, and maintain our shared infrastructure."

Today, Bird kicked off a pilot program in Cleveland – testing its fleet of dock-free, low-speed electric scooters to members of the community.

We look forward to testing our affordable transportation option with the people and communities of Cleveland, as they recognize the need for an accessible and reliable transit system. As ridership grows, and as part of our “Save Our Sidewalks” Pledge, we will adjust the number of Birds and areas they’re available based on rider demand.

Currently, more than one-third of cars trips in the U.S. are less than two miles long, and Birds are perfect for those “last mile” trips that are too long to walk, but too short to drive. Our mission is to get people out of their cars, reduce traffic and congestion, and cut carbon emissions. I've attached more information on Bird and would also recommend you check out the “Save Our Sidewalks” Pledge to learn about Bird’s unique commitment to work collaboratively with city officials and community stakeholders.

News 5 has reached out to the city of Cleveland for a statement.

Information about the scooters and app can be found here.