There is an abundance of supply. It can help save money and it can help the Northeast Ohio Regional Sewer District reduce its carbon footprint. After a decade’s worth of testing and seeking regulatory approval, a new program to re-use a byproduct of the wastewater treatment process is finally online and could be coming to a garden or lawn near you.

There is an abundance of supply. It can help save money and it can help the Northeast Ohio Regional Sewer District reduce its carbon footprint. After a decade’s worth of testing and seeking regulatory approval, a new program to re-use a byproduct of the wastewater treatment process is finally online and could be coming to a garden or lawn near you.

The program, which includes the re-purposing of incinerated biosolid ash, could save the NEORSD more than $1.3 million over the next three years. The thousands of cubic yards of biosolid ash that NEORSD produces on an annual basis will be mixed into topsoil, which will be distributed by Kurtz Brothers, a local landscaping supply company. Kurtz Brothers received a permit from the Ohio EPA earlier this summer before inking a three-year contract with NEORSD in June.

For Robin Halperin, the manager of regulatory compliance at NEORSD, it has been a long time coming.

“It’s awesome,” Halperin said as he let out a hearty laugh. “It’s really awesome. This has been one of my big goals when I joined the sewer district 10 years ago.”

In 2008, freshly into her new position at the sewer district, Halperin was saddled with solving a problem. The NEORSD’s Southerly Wastewater Treatment Plant had run out of room to install a new biosolid ash lagoon. There are three on the property already. However, instead of seeking bids to have companies come in, collect the ash, and truck the material to a specialized landfill more than 40 miles away, Halperin thought there had to be a better way.

“How do we save money? This stuff doesn’t need to go into a landfill. Let’s save landfill space for things that really need to go into the landfill,” Halperin said. “This [ash] has value. It has nutrients that help things grow.”

The biosolid ash is the byproduct of the end stage of the sewer treatment process. Solid sewage matter is funneled into a massive incinerator, which vaporizes the material in 1900-degree heat. The exhaust from the incineration process is funneled through special filters called “scrubbers.”

At the end of the process, all that remains is ash.

The ash is then combined into a slurry, which is pumped into one of the three lagoons. The material gives the lagoons and surrounding dirt a reddish tint. 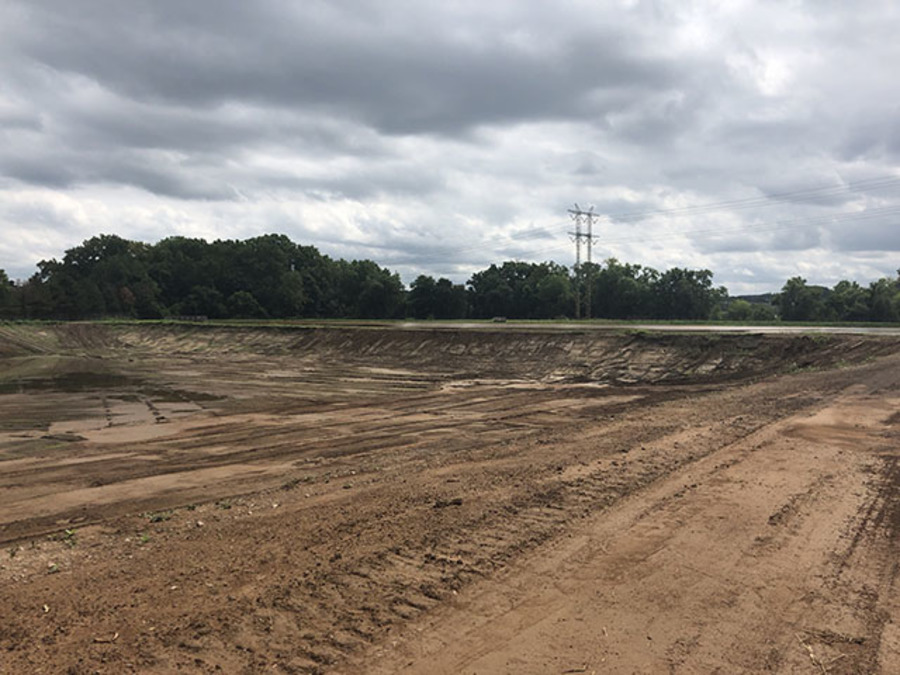 Because the material is abundant and rich with phosphorus, Halperin theorized it could be used as an excellent topsoil additive. The NEORSD began researching and testing the material – even using the biosolid ash in the topsoil of its own facilities. Lab testing showed the material, which is completely safe, helped grass grow taller and thicker.

However, neither the agency nor the Ohio EPA had a permitting process in place that would allow a third-party – a landscaping company, for example – to collect and use the biosolid ash.

“It wasn’t too cumbersome; It just took a lot of time,” Halperin said. “We had to make sure we were doing our due diligence and helping the [Ohio EPA] with what information they needed to be able to make a good decision and make a process that could work.”

Years went by and progress continued to be made. In 2015, local landscaping supplier Kurtz Brothers offered to partner up with the NEORSD to use the biosolid ash in its own products. After more testing and securing regulatory approval, the company received a permit this summer. Not long after, it signed a three-year contract with NEORSD.

It was a major milestone not just for NEORSD but the state as well.

“We are the first entity to take our biosolids incinerator ash and re-use it in a topsoil product,” Halperin said. “You don’t need fertilizer if you’re using topsoil with our ash.”

Not only does the re-purposing of the biosolid ash save the NEORSD and its ratepayers money, but Halperin said the new program will help the agency reduce its carbon footprint and save space in the landfill. The biosolid ash could also have uses as an additive to concrete mixes and low-strength mortar, although more testing is needed, Halperin said.