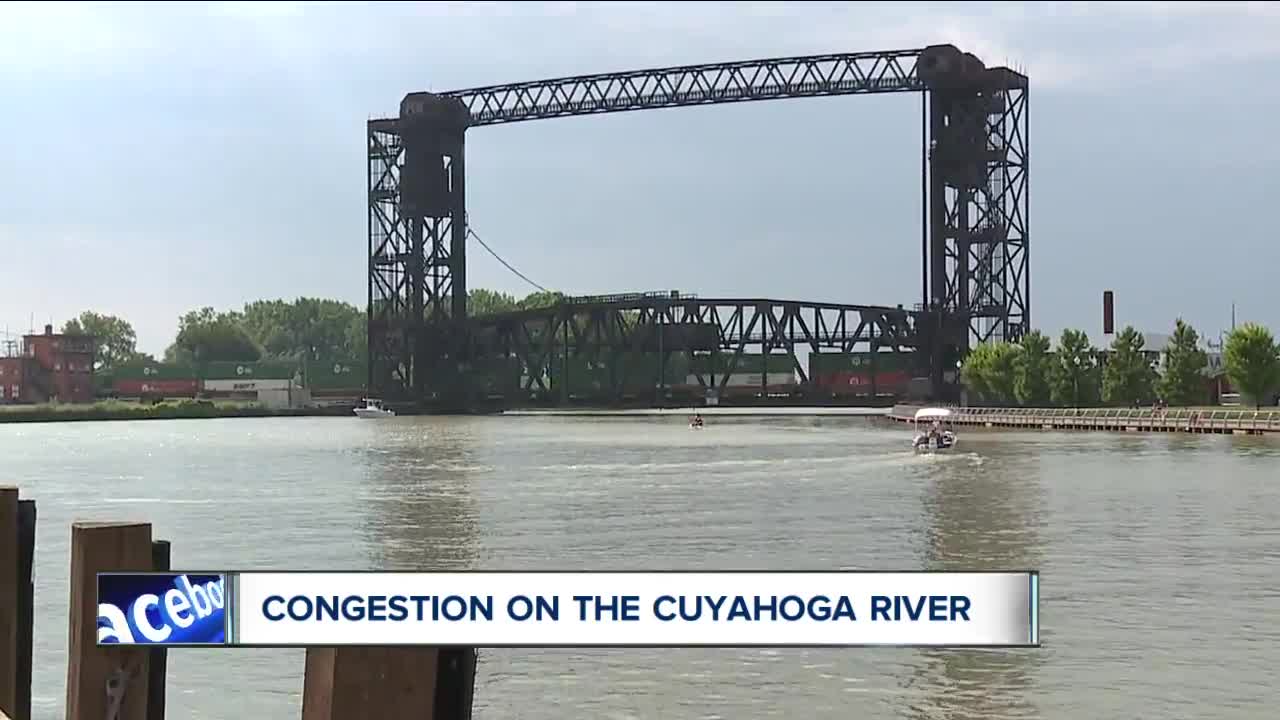 The ongoing issues with the Norfolk Southern lift bridge, known colloquially as the Iron Curtain, at the mouth of the Cuyahoga River continue to cause delays and canceled trips during the peak tourism season. 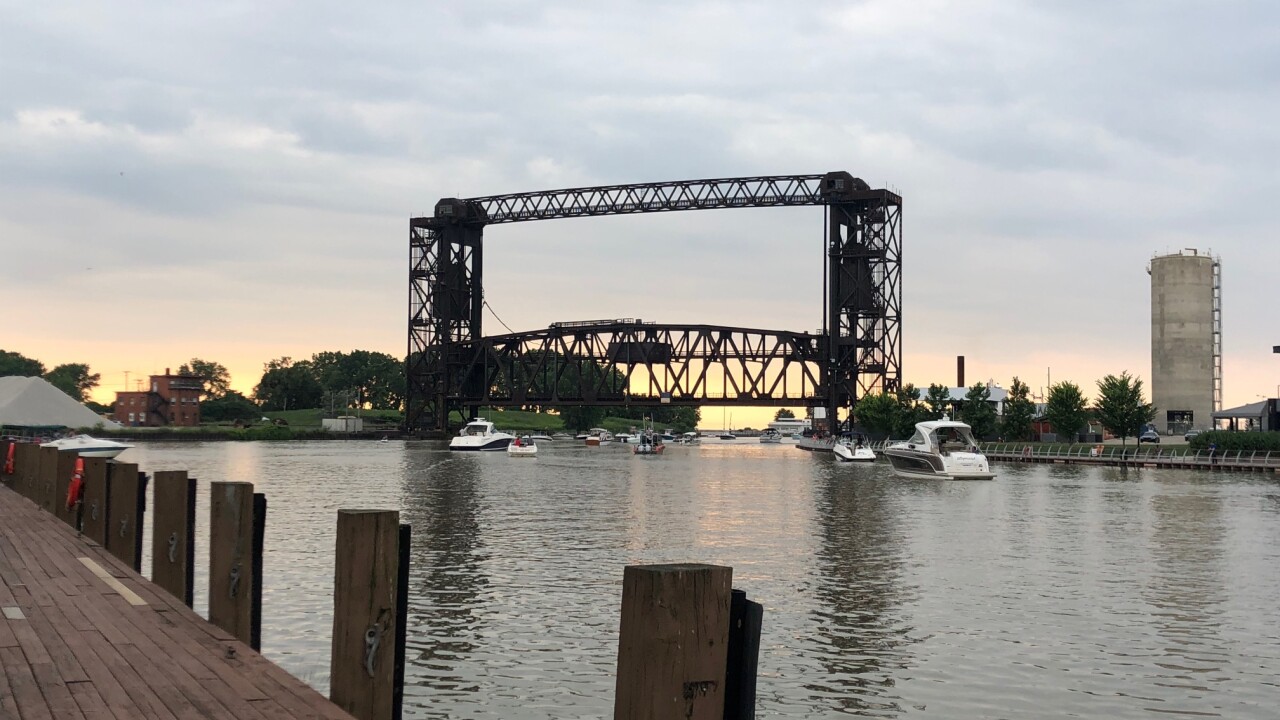 CLEVELAND — The ongoing issues with the Norfolk Southern lift bridge, known colloquially as the Iron Curtain, at the mouth of the Cuyahoga River continue to cause delays and canceled trips during the peak tourism season. Not only has the lift bridge negatively impacted maritime businesses in the Flats, it is also creating potential safety issues, local business owners said.

Officially known as NS1, the lift bridge that spans the area round the confluence of Lake Erie and the river essentially cuts the river in half when it is in the lowered position. The bridge lowers in order to accommodate the dozens of trains that traverse the area on a daily basis. However, instead of raising when the span isn’t needed for an approaching or departing train, the bridge appears to be defaulting to the lowered position. The bridge was in the lowered position for more than two straight hours Wednesday evening, creating a small flotilla of boats, vessels and pleasure craft on both sides of the bridge. In that time period, four trains used the bridge for less than 20 minutes combined.

“In the last few days, the bridge has been down for two hours plus,” said Laurie Dittoe, the owner of Great Lakes Watersports. “When you have a two hour boat rental and the bridge is down two hours, my customers are very unhappy.”

Dittoe’s customers aren’t the only ones unhappy. On multiple occasions this week, trips aboard the Nautica Queen and Goodtime III were either delayed or canceled. The affected trips were completely booked.

Capt. Jordan Kit said one of the trips on Tuesday had to be canceled because of the delays caused by NS1. A canceled trip in the peak tourism season is a substantial loss of revenue. For both Nautica Queen and Goodtime III, a large majority of their business comes between Independence Day and Labor Day.

Dittoe’s frustration is growing, especially considering even a 15 to 30 minute delay caused by the impassable waterway tens to have a snowball effect. On several occasions, Dittoe’s last rentals of the day are caught on the lake side of the bridge, delaying their arrival back to the dock by hours on end. In that time, Dittoe’s employees, who are still on the clock, can’t perform their closing duties. Some rentals have had to be canceled altogether.

“We just keep canceling people and they are so upset. They made big plans. It’s for engagements, it’s for funerals, birthday parties, bachelor parties. We’ve broken their hearts,” Dittoe said. “This isn’t heart surgery. I understand that it’s just a recreational boat ride but it means a lot to these people. They are counting on us and we are letting them down – but not really -- it’s the bridge that is letting them down. We’re doing our best.”

In addition to the negative impact on maritime businesses, both Dittoe and Slusarski are worried about the potential safety issues the lift bridge creates when in the lowered position. On busy nights, the lowered bridge creates substantial flotillas on both sides – full of boats and vessels of all sizes. When the bridge finally lifts, many of the frustrated boaters race to get to the other side of the bridge.

“There are a lot of moving parts that can create danger. The vessel that are sitting around, they could get in your way. [The people in the pleasure craft], they could try to touch you. They could crash into you. They could get swamped,” Capt. Slusarski said. “It’s a mess. It can be a mess. When we are delayed and the bridge is down for 30 minutes to an hour on a nice Saturday or Friday evening, there will be 30 boats on each side just plugging up the river.”

The delays have also left some of Dittoe’s customers baking in the summer sun without water.

"On a normal day the jet skiers can go under the bridge but because the water is so high this year, they are not able to go under,” Dittoe said. “They sit out there for two hours. They have no protection. They have no water. They come back and they are physically ill.”

Slusarski said the problems with the lift bridge intensified once Norfolk Southern recently changed how it operated the lift bridge. Instead of allowing the bridge tender to operate the lifting and lowering of the bridge with some autonomy, the operations have instead shifted to a dispatch center in Georgia. The bridge tender now radios the dispatcher who then decides whether to raise the bridge. They added layer of bureaucracy has exacerbated the delays, according to Slusarski.

Although Norfolk Southern representatives have previously stated they were trying to improve the operation of the bridge to reduce delays, those improvements do not appear to have taken hold. Requests for comment were not returned as of Wednesday night.

Slusarski said he understands the need for the efficient transportation of goods and commerce through the rail system. However, there is plenty of room for compromise, he said. One such compromise could be having the bridge lifted for a short period of time – perhaps as little as five minutes – once an hour.

“We have to share the river but it’s getting rough to do so,” Slusarski said.