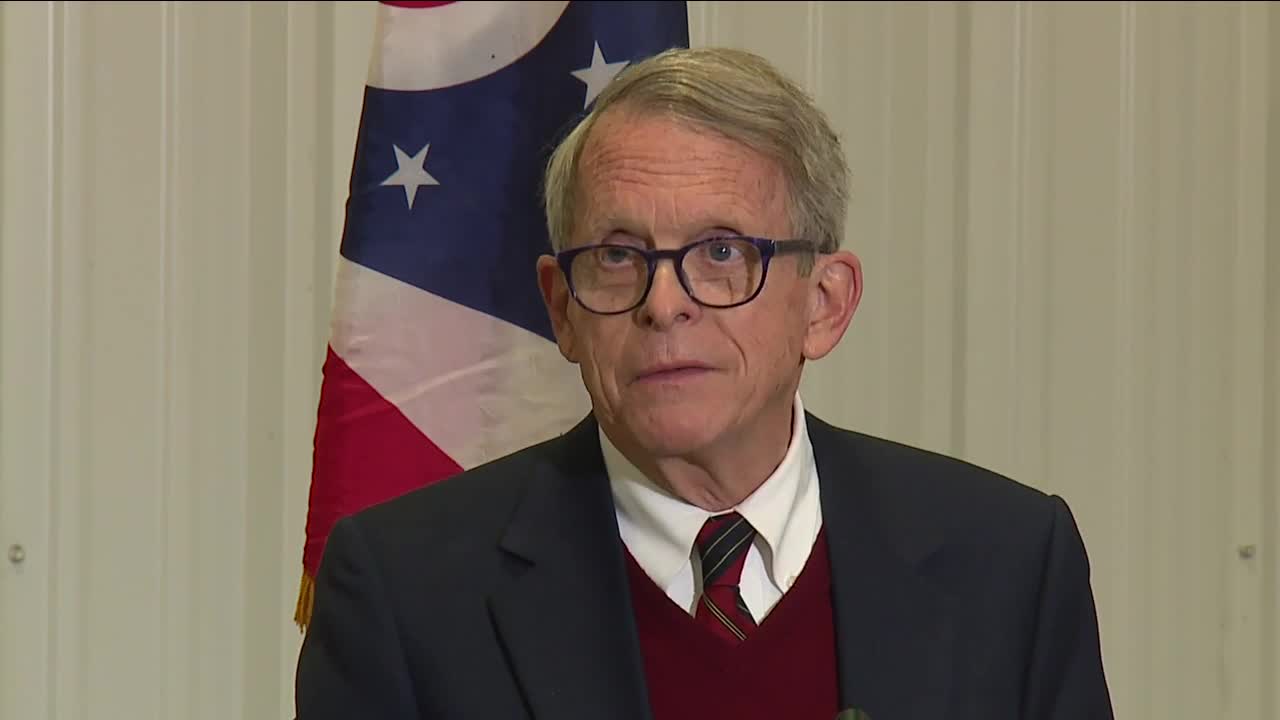 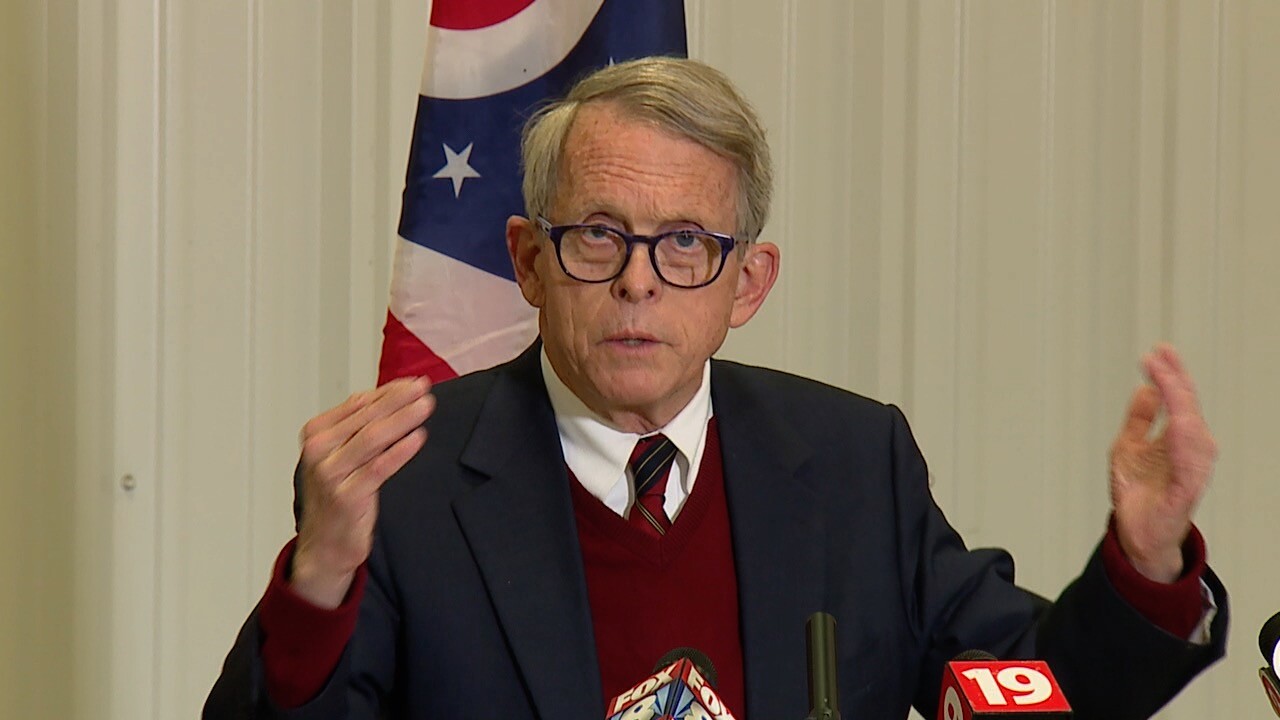 CLEVELAND — With more encouraging news on a possible COVID-19 vaccine, Gov. Mike DeWine said the light at the end of the tunnel is coming but now is not the time to be complacent. In an hour's stop at Burke Lakefront Airport in which the governor answered dozens of questions from reporters, DeWine implored Ohioans to forgo typical Thanksgiving celebrations in hopes that surging cases of coronavirus will eventually subside.

Although he expressed his patented optimism, the governor also didn't mince words when speaking about the realities of the pandemic still underway all across the state.

"Every county in Northeast Ohio is now literally on fire because of this virus," the governor said in his opening remarks. "Every single county is at least three times the CDC's high incidence level. It's just a phenomenal, raging fire going through the state."

DeWine highlighted the dire situation in Lake County, where the county has roughly 10 times the 'high incidence' rate set forth by the CDC. Currently, about one in 100 Lake County residents have tested positive for COVID-19 in the past two weeks.

The governor was also joined by Dr. Carla O'Day, the head of the emergency department at St. Vincent Charity Medical Center in Cleveland. The surging number of cases statewide puts the state and it increasingly stretched healthcare systems in a precarious position, especially if people opt to go against the recommendations of the medical community by having large family gatherings and parties centered around Thanksgiving.

"This is not the year to have that big Thanksgiving dinner, which I do every year. I cook for 30 people and I'm there. Everybody looks forward to it. We really like it," O'Day said. "I'm going miss it this year but we're not going to do it. It's just too dangerous. Thinking back to past generations, with the world wars it took sacrifice. There were rations and things like that. Wearing a mask and washing your hands and eliminating your contact, in the big picture, that's not so awful especially when we know that help is coming and help is on the way."

O'Day said it is also extremely important for people not to be ushered into a false sense of security by a negative COVID-19 test. Also, for those who have not personally dealt with the virus, it doesn't mean the virus is any less dangerous.

"Just having a negative test does not give you carte blanche to go out and have a regular Thanksgiving," O'Day said. "It's just denial. Some people think, 'this can't really happen to me' until they see somebody where they really get it or where their family member gets it and gets gravely ill. Until then, nobody thinks it can happen to them. Trust me, they can."

On Wednesday morning, Pfizer announced that its vaccine has shown to be 95% with few participants reporting side effects, which largely amounted to fatigue and headache. DeWine told reporters Wednesday morning that he still expects the first batch of vaccines to arrive in Ohio at some point next month. The early vaccines will be used across the state's nursing homes, where staff and residents have shown to be significantly more vulnerable to the deadly virus.

In order to buy time before a vaccine is widely available to the general public, DeWine said it is imperative that Ohioans continue to practice social distancing and wear masks. In order to combat the recent surge -- the third surge since March --, the governor issued further restrictions on weddings and funerals, in addition to authorizing a compliance enforcement team that will ensure retailers are keeping employees and customers safe. Additionally, the governor issued a curfew beginning Thursday in hopes of curtailing the spread of the virus between the hours of 10 p.m. and 5 a.m.

Under the curfew, those that are going to and from work as well as those needing to buy essential items will be exempt. Additionally, restaurants will still be permitted to offer delivery and drive-thru services in that time frame. The nightly curfew will span the next three weeks.

DeWine defended the curfew as striking the correct and necessary balance between public health interests and allowing Ohioans to continue to earn a living.

"We don't expect the police to pull someone over if they are driving at night. That's not going to happen. But if police come to a group of people who are congregating somewhere, I expect the police to tell them to go home," the governor said. "I think what we need to do is decide what is important in our lives. It seems to me that keeping kids in school is important. Making sure that single mom can feed her kids and she can work, I think that's pretty important. The inconvenience of wearing a mask isn't a lot to ask."

The governor's press conference Wednesday also comes as several area bars and restaurants continue to flagrantly violate state health orders. Although the governor said he had to be cautious about what he said given the state liquor control board's jurisdiction over the matter, DeWine issued a warning for repeat violators.

"People should not think that they can continue to put their fellow Ohioans in harm's way and in jeopardy and there not be some kind of consequences," DeWine said. "For the bars, it is a license granted by the state so this is up to the liquor control. I think you can expect to see some tough action by the liquor control board."

Although the positive news coming out about the vaccine is welcome news for a population that has weathered a barrage of restrictions, lockdowns, and inconveniences for the past eight months, DeWine urged Ohioans to cut down on their personal contacts out in the community by up to 20%. Fewer contacts plus adherence to the recent orders should get the state through this especially difficult third surge.

O'Day said if the state can get a handle on the rising number of coronavirus cases, it will usher in a much-needed reprieve at hospitals and medical centers nationwide. Currently, doctors, nurses, and support staff at area hospitals have already reached and surpassed a level of exhaustion.

"We all are, we all are. It's difficult," O'Day said. "When you work in that emergency department, it is much more intense than it was before."