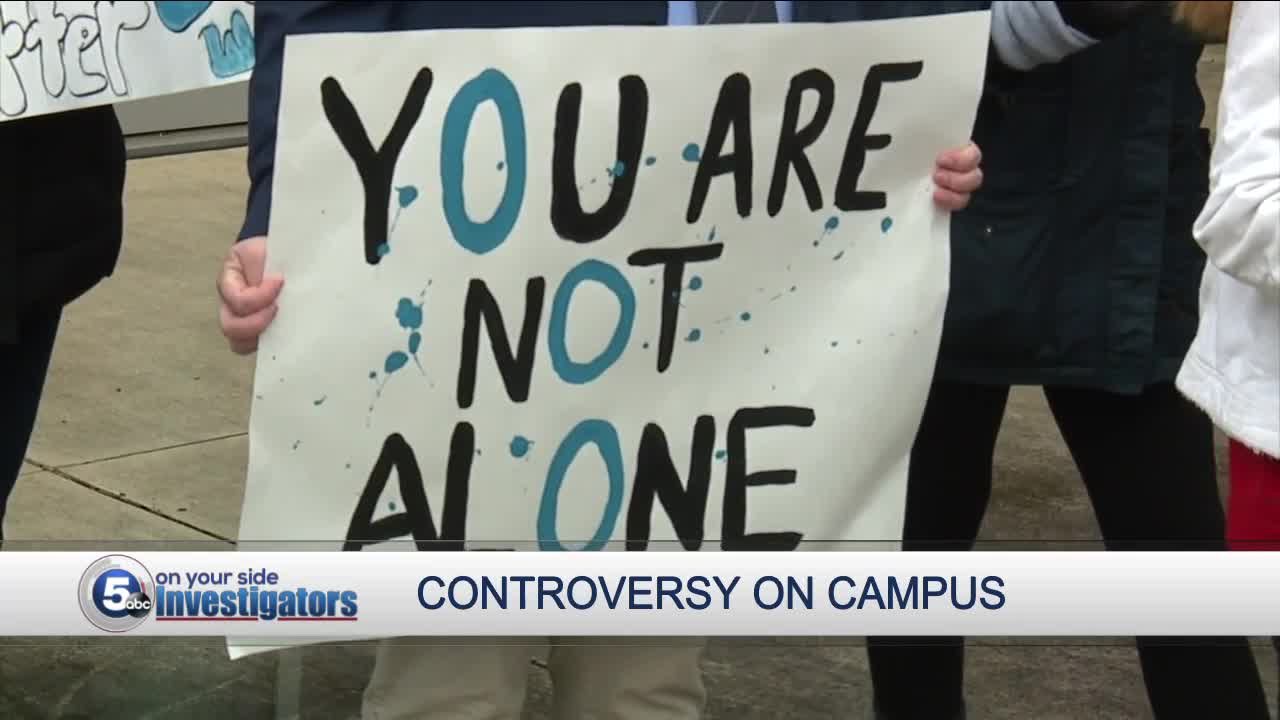 Cleveland State University students continue to speak out about sexual violence after learning a man accused of rape was featured in a CSU promotional video. 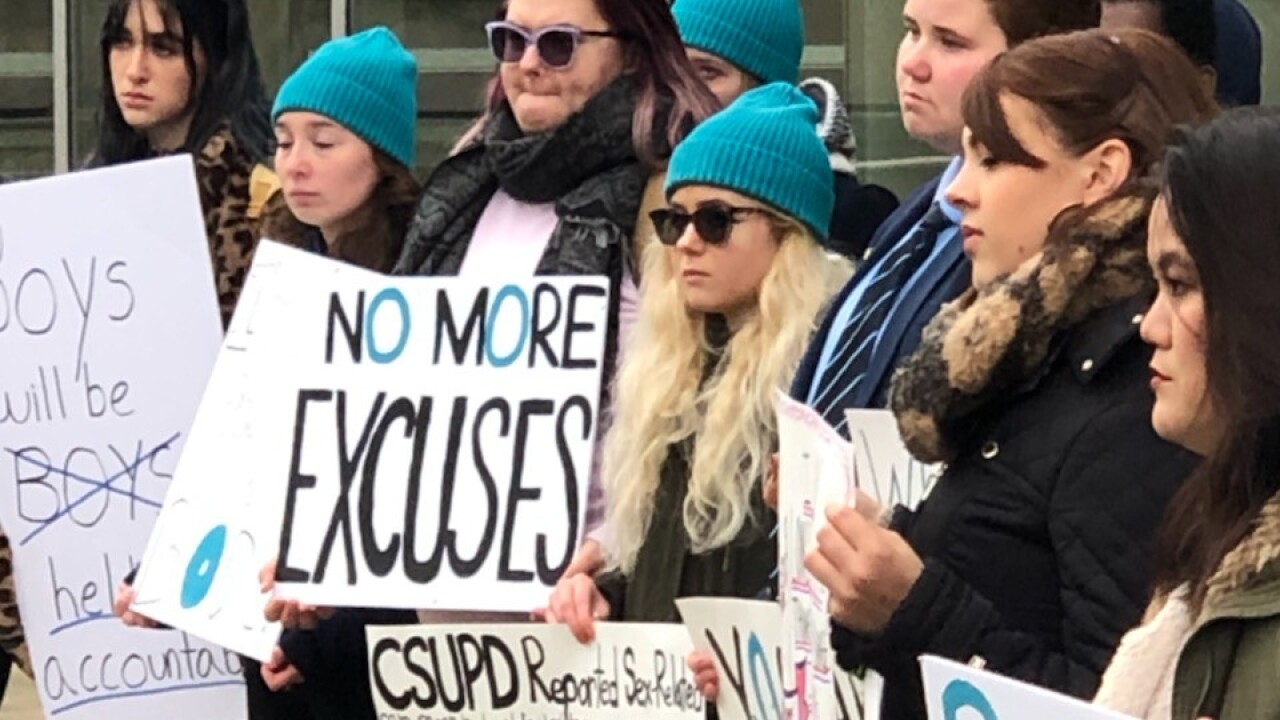 CLEVELAND — Cleveland State University students continue to speak out about sexual violence after learning a man accused of rape was featured in a CSU promotional video.

Approximately two dozen students took part in a demonstration entitled “No More” on the courtyard outside the school’s student center Wednesday morning to raise awareness about sexual violence on campus.

Speaker Sally Gabra, a CSU senior, chanted “No more, ‘It's none of my business!’ No more, ‘Boys will be boys’!” to the crowd, which responded with cheers of support, and held signs entitled “Rapists Suck” and “No More Excuses.”

Gabra also described students’ personal stories of sexual assault, including her own experience.

The students planned the demonstration after learning a man accused of rape was featured in a CSU promotional video.

Zach Hiidel, a 21-year-old senior, was indicted on two counts of rape and one count of felonious assault Aug. 27 in the Cuyahoga County Court of Common Pleas. He’s accused of using a pill bottle and a soda can to rape a woman on Feb. 16.

Hiidel appeared in the university’s “Find Your Fit at CSU” video until The Cauldron, CSU’s student newspaper, published a report Nov. 4 detailing the allegations against him.

Carissa Newsome, a senior, said the university’s decision to leave the video featuring Hiidel online for more than two months after criminal charges were filed inspired her to help organize the demonstration.

Students also found a unique way to raise awareness on campus after the initial report by The Cauldron was published one month ago.

Graffiti warning students about alleged sexual predators appeared on the walls of women’s bathrooms on campus.

One said, “We need to protect ourselves from sexual predators.” Underneath the statement, there was list of 12 names. Hiidel’s name was number two on the list.

Editor-in-chief Kourtney Husnick, who broke the story, found the video featuring Hiidel was posted at the top of the school’s Facebook page.

“If you went to the Facebook page for CSU, four seconds in, you saw his face,” she said. “For me, for my staff, that was a concern, because he's a face of the university and no one was acknowledging that this happened.”

Two weeks after her report, CSU posted a new video to the top of their Facebook page.

News 5 has reached out to Hiidel’s attorneys several times. We received no comment today.

However, after our initial report, attorney Tim Riley provided us the following statement:

Cleveland State University officials refused to answer questions about Hiidel’s case but sent an email to students that they have “separated” Hiidel from campus until his criminal case is resolved. The email also notes Hiidel is no longer a university employee or featured in promotional materials.

CSU has failed to confirm whether their investigation cleared Hiidel of wrongdoing or to respond to any additional questions regarding the rape allegations against him and campus policy regarding sexual assault.

“The safety and well-being of our students is our highest priority. Complaints of sexual violence are thoroughly investigated and referred to the proper authorities for follow-up. If the accused is found responsible, appropriate disciplinary action, up to and including expulsion, is taken.

"CSU provides students with a host of support services and accommodations as needed during investigations of sexual assault along with a number of robust policies designed to protect students. All allegations of sexual misconduct should be immediately reported to Campus Police or the Office of Institutional Equity for further action.

"We take any concern for safety expressed by our students very seriously. We have already reached out to concerned students to learn more about their concerns, improve communication, and seek ways to further improve campus safety.”