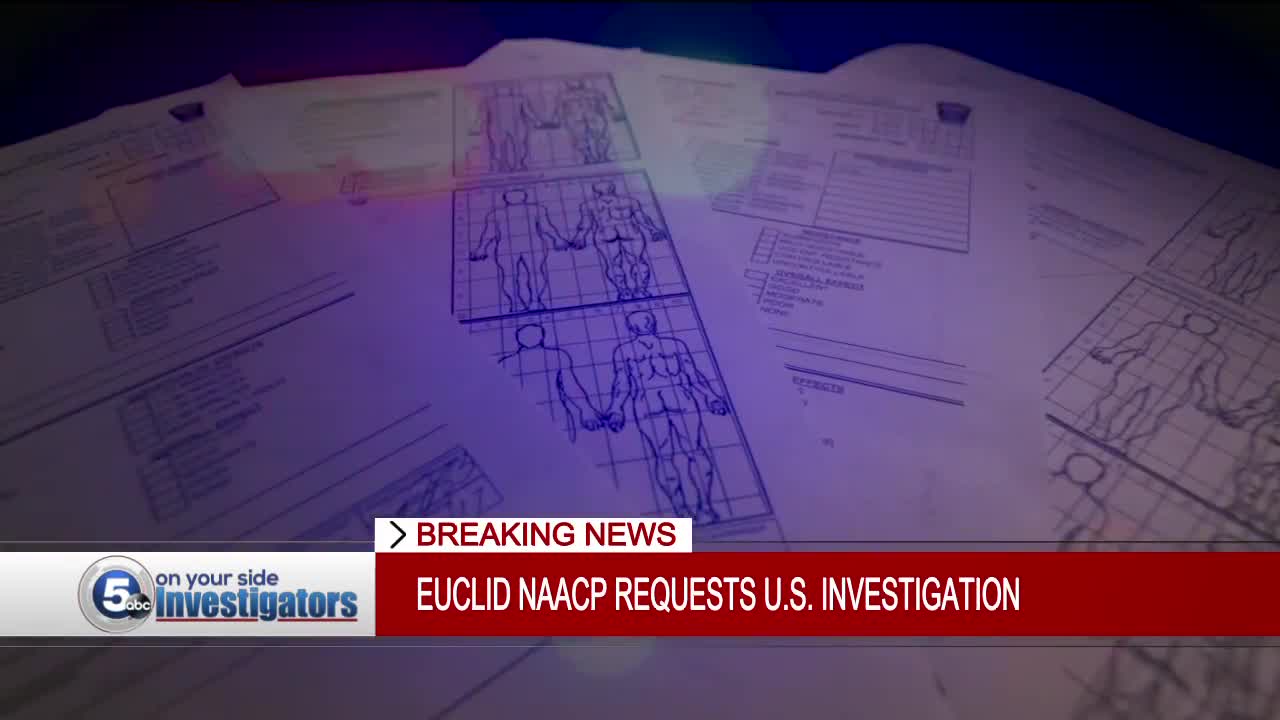 After an exclusive News 5 investigation, the Euclid NAACP and the Legal Advocacy and Writ Resources (L.A.W.R.S.) Foundation have requested a federal investigation into civil rights violations by the Euclid Police Department.

EUCLID, Ohio — After an exclusive News 5 investigation, the Euclid NAACP and the Legal Advocacy and Writ Resources (L.A.W.R.S.) Foundation have requested a federal investigation into civil rights violations by the Euclid Police Department.

“We have a very egregious problem going on in the city of Euclid,” said McDonald. “Right now, we are at a dire straits and we really need to get federal assistance in these cases."

The NAACP letter cites serious concerns revealed by 5 On Your Side investigators November report “Serious Red Flags: Euclid’s Use of Force.”

Our investigative team spent six months examining all of the 273 forms filed by officers between January 2016 and June 2018.

Immediately, a troubling pattern emerged: only a handful of officers were involved in the majority of incidents involving uses of force, including punches, takedowns and Tasers.

Our data analysis found less than 20 percent of Euclid Police officers were involved in more than 80 percent of the use of force incidents.

“When that happens, that is a red flag for the organization,” said Jim Buerrmann, president of the Police Foundation, a non-partisan research group dedicated to improving policing practices.

“Clearly, when a small number of people are responsible for the lion’s share of the use of force, somebody needs to be taking a very hard look at that,” he said.

“Allowing a certain set of renegade officers to enact law enforcement on the streets in any way they see fit outside of the law, that's untenable,” he said.

Montgomery plans to run for mayor against incumbent Kirsten Holzheimer Gail this fall.

“It's time that we made different changes in leadership here in Euclid,” he said.

Montgomery said he was frustrated by what happened after Officer Michael Amiott, who was captured on camera punching Richard Hubbard during a routine traffic stop in 2017, was awarded his job back through arbitration.

At a November 5 city council meeting, Gail promised to hold meetings with residents about problems with policing.

"We are scheduling a series of community listening sessions to have conversations about safety and about building trust between our residents,” said Gail.

However, more than six months later, Gail has failed to schedule a single session.

“What it tells me is that she is tone deaf to the issues of certain parts of our community,” said Montgomery.

5 On Your Side Investigator Sarah Buduson asked Mayor Gail why she has not scheduled listening sessions before Monday night’s council meeting.

Gail said, "I have lots of interactions with the community all the time.”

Gail also said she would schedule an on-camera interview Tuesday.

“I would be happy to talk with you. Yes. Tomorrow,” she said. “Yes, that would be great.”

However, when we called to schedule the discussion, she sent us the following statement:

“Unfortunately, my schedule today did not provide an opportunity to talk to you however I did want to update you on the multiple ways I’ve engaged in listening sessions with Euclid residents.
I have had a number of opportunities that were scheduled all over the City. These included Dinner with a Cop, Neighborhood meetings, Ward meetings, Muffins with the Mayor for the seniors, monthly Coffee with a Cop conversations, Coffee Connections with our business community, a highly attended Crime Prevention Mini-Fair and many individual meetings.

Looking forward, Common Ground Conversations will be held for all those that register with the Cleveland Foundation. On June 30, these facilitated small group discussions will broaden our human connection and understanding amongst each other. I am committed to participating in additional opportunities to meet and talk with residents throughout the year.”